Workers load carts at a brick factory in Dhaka, Bangladesh, in April 2017.   © Reuters

JAKARTA -- Despite decades of world-beating economic growth that has lifted hundreds of millions of people out of poverty and into middle class life, around 900 million more Asian workers remain in what the International Labour Organization deems "vulnerable" employment.

Vulnerable employment refers to people who lack formal work arrangements or contracts, are often nonsalaried and working part-time in sectors such as agriculture or retail, and are sometimes self-employed. Such workers often can be fired without much notice and subsequently have no access to unemployment benefit.

Although the ILO's "World Employment and Social Outlook: Trends 2018" report, issued on Jan. 22, says that unemployment in Asia "should remain low by international standards at 4.2%" as the region is "expected to continue to create jobs at a fast rate," it also notes that the majority of the world's 1.4 billion people in vulnerable employment are in Asia.

The global unemployment average for 2017 was 5.6%, with percentages for large, so-called "emerging" Asian economies matching or even bettering those in wealthier counterparts. Unemployment figures in 2017 for China, India and Indonesia were 4.7%, 3.5% and 4.3% respectively, compared with 5.7% in Australia, 2.8% in Japan and 4.4% in the United States.

Some Southeast Asian countries were estimated at having more or less full employment, with Laos on 0.7% unemployment for 2017, Myanmar 0.8%, Thailand 1%, Vietnam 2.1%, and, most strikingly perhaps, Cambodia on 0.2%.

But large numbers of people in less well-off Asian countries are in vulnerable employment. In China, where the World Bank estimates that 800 million people have been "lifted out of poverty" since economic reforms started in 1978, a third of all workers remain classed as vulnerable, amounting to around 250 million people. 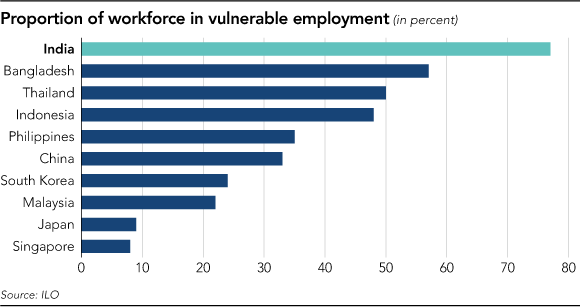 In India the number of vulnerable unemployed is a notch below 390 million, close to half of all the vulnerable workers in Asia and representing 77% of Indian workers.

"The rapid growth of [information and communication technology] services in recent years in some emerging countries, notably India, has not generated enough employment opportunities for the large majority of the population," the ILO report noted.

Elsewhere, in those countries that seem blessed with full employment, the percentages are not much better. In Cambodia, 51% of workers are in vulnerable jobs, while the corresponding percentages for Indonesia, Laos, Myanmar, Thailand and Vietnam range between 47-58%.

Such countries feature "large shares of workers trying to get by on a mix of own-account work [such as] selling on the street and occasional daily paid work," said Sara Elder, head of the Regional Economic & Social Analysis Unit at the ILO's Asia-Pacific division.

Notable improvements were seen in China, Indonesia and the Philippines over the past decade, with that trio reducing vulnerable employment by around 10 percentage points each as their economies grew at over 5% -- sometimes closer to 10% -- per year.

But the share of vulnerably-employed in all three remains relatively high, while in countries such as Myanmar and Vietnam, which have also seen reductions in the overall proportion of vulnerable workers, have in turn seen a recent levelling-off of steady manufacturing and services work opportunities.

While 43% of all workers worldwide are estimated to be in vulnerable employment, in Australia, Japan and the U.S. the range is just 6% to 11% -- though could be set to rise as phenomena such as "zero hours" contracts take hold and the so-called "gig economy" expands in wealthier countries. In developing or poorer countries, economic growth has not always been accompanied by a reduction in vulnerable employment. As economies grow, the percentage of people working in agriculture drops as people move from rural to urban areas. Around 200 million people in East Asia moved from the countryside to cities in the decade up to 2010, numbers that hint at how the region's urban areas have exploded in size.

But even though the proportion of vulnerable employment in farming tends to be high, the transition has not automatically meant a drop in informal or vulnerable work, as people move to the cities to work in sectors such as construction and retail where casual labor is common.

Moreover, it appears that low wages go hand-in-hand with vulnerable employment: Worldwide, around 730 million workers have to get by on average incomes of less than $3.10 per day, according to the ILO.

Many of those poorly-paid people are engaged in casual or seasonal work, lacking contracts and a guaranteed salary. "High incidence of informality continues to undermine the prospects of further reducing working poverty," the ILO said, adding that the phenomenon was particularly widespread in India, Cambodia and Nepal.

According to Sara Elder, to drive the levels of vulnerable employees below 30% -- as countries such as Malaysia and South Korea have managed -- countries will need to expand their manufacturing and services sectors, while "strengthening the institutions that promote and enforce 'good' jobs with contracts and living wages," such as labor laws, labor inspection and collective bargaining.