Government pushes on with $1.3bn project to handle flood of foreign tourists KATHMANDU -- The government of Nepal is moving toward final approval of a second international airport, which, when complete, is expected to be the largest in south Asia.

The $1.3 billion project is going ahead despite opposition from environmentalists and an order from the Supreme Court to not raze 2.4 million trees on the site where the new Nijgadh International Airport is to be built.

"We are focusing on serving 1 million-plus passengers annually in the first phase," said Kedar Bahadur Adhikari, secretary to the civil aviation ministry, in a recent interview with the Nikkei Asian Review.

"The airport will [use] air routes [that] will reduce the flying distance between West and East Asia, where we will be to see flights from Nepal to Europe via China," he said, adding the new "airport will also [connect with] India's satellite cities."

Nijgadh airport is designed to relieve capacity restraints at Tribhuvan, the Himalayan nation's only international airport. The proposed site is 27 km from the Indian border and 150 km from Kathmandu by road. The 72.5 km Kathmandu-Nijgadh highway, scheduled to be completed by 2024, is expected to shorten travel time from the capital to the new airport to about an hour. 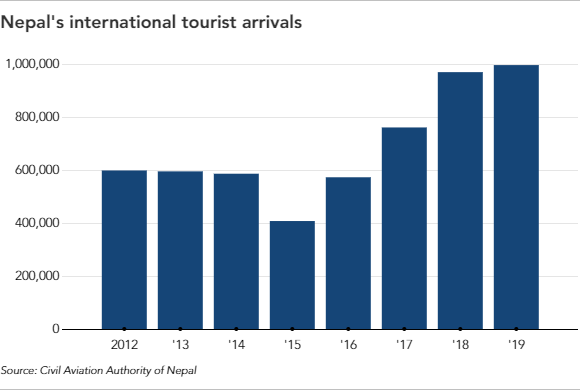 The airport is expected to have two parallel 3.6 km runways, a terminal building, taxiways, an aircraft maintenance building, and other faculties, making it the largest such facility in south Asia. It will ultimately be able to handle 15 million passengers annually and large jets, including the Airbus-A380.

Investment Board Nepal, which is overseeing the project, recently shortlisted Zurich Airport for construction of the facility, and sought a proposal from the company by March 1.

The project has been a point of serious contention, particularly its environmental impact, such as the felling of trees to clear the site and threats to wildlife. The civil aviation ministry conducted an environmental impact assessment, finding that 2.4 million trees would have to be cleared for the project, alarming environmental activists.

"Nepal may well need an alternative airport, but that airport [should] not jeopardize South Asian regional hydrology and heighten natural disaster risks, especially flooding," said Kashish Das Shrestha, a policy analyst specializing in sustainability issues. Since 2018, the country "has experienced a crippling heat wave, deadly floods, a devastating, long cold wave and even a once-in-multigeneration tornado-like storm," he added.

Although environmentalists and other critics oppose the project, the government is pushing ahead. Regarding the legal injunction to spare the trees, Adhikari said: "The hearing for the cutting of trees will be heard on Feb 16. The decision is up to the Supreme Court."

Talk of a second international airport in Nepal first surfaced around 1995, but several factors delayed the project. Although two airports are now under construction in Pokhara, in central Nepal, and Siddharthanagar, 270 km west of Kathmandu, critics say they are regional airports and will not be able to handle international air traffic, which has increased substantially in recent years. Tribhuvan handled 7.2 million passengers in 2019 and Nepal expects to see 9 million air passengers annually by next year. Fearing that the airport is near capacity, Rajan Pokhrel, director-general of the Civil Aviation Authority of Nepal, told the Nikkei Asian Review that the new Nijgadh airport is essential to not only avert aviation disasters but "to handle the increasing flow of air passengers."

Nepal has dubbed this year "#VisitNepal2020" and hopes to welcome 2 million international visitors, up from 995,884 in last year. But Tribhuvan cannot handle even the current level of traffic. Flights in and out of Nepal are constantly backed up, and at times flights are diverted to India or other neighboring countries when planes cannot land at Tribhuvan.

Although many people in Nepal agree that a new airport is badly needed, there are geographic constraints: Nepal's terrain is famously rugged and 45% of its land is forested. Flat areas are densely populated. Thus, a new airport will "inevitably cause environmental, social and other impacts," said Surya Raj Acharya, a social activist and spokesperson for a regional political party.

"All the alternative sites currently under discussion are either ruled out by previous technical stud[ies] or outright unsuitable" for technical reasons, said Acharya. "In a developing country like Nepal, the cause of environmental problems is also poverty and underdevelopment. So the environmental concern over this project should be centered not on preventing this project [but] rather [on] making this project more environmental friendly and sustainable."