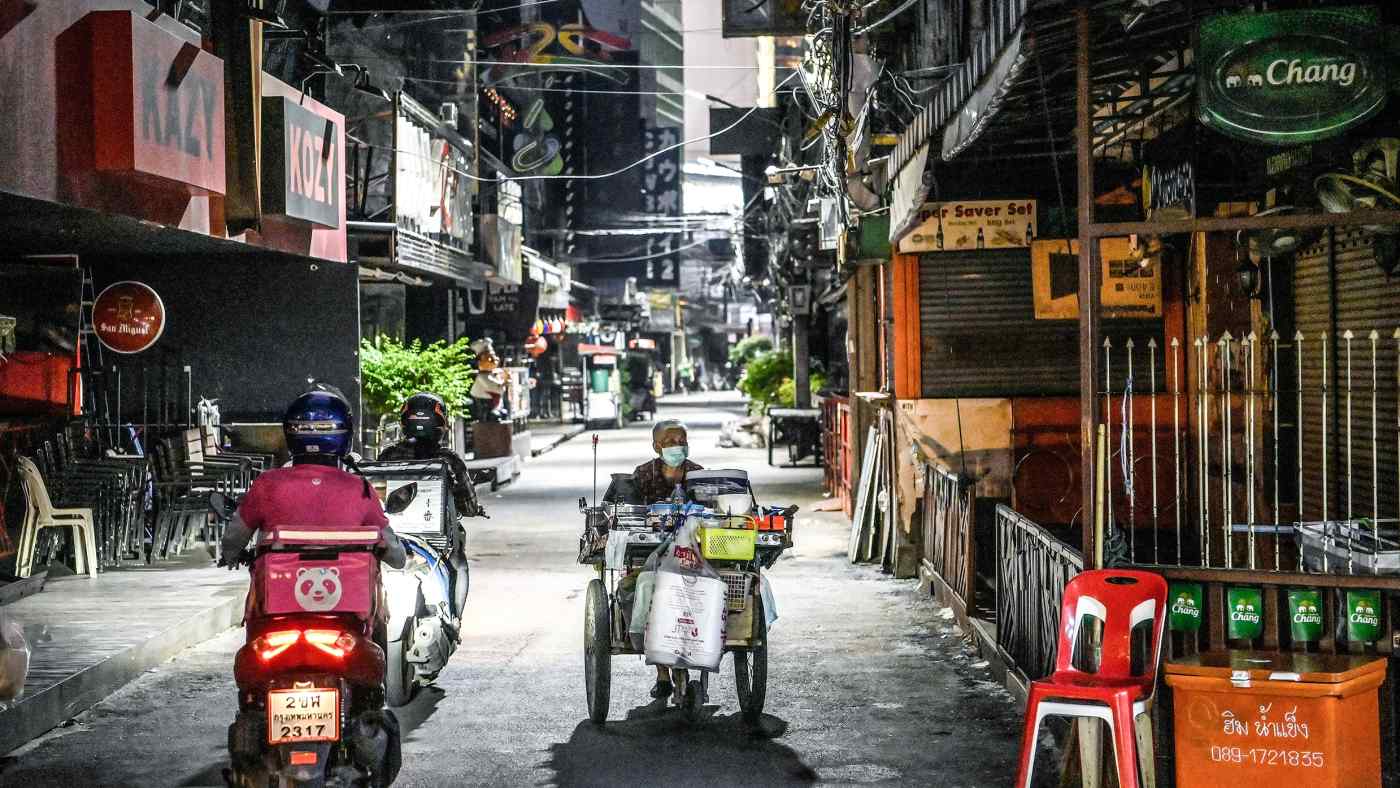 BANGKOK -- The impact of the prolonged COVID-19 pandemic has delayed economic recovery in Southeast Asia, as Thailand became the fourth in six major regional economies to lodge a yearly economic contraction during the first three months of 2021.

New local outbreaks of the disease are clouding economic projections of the countries in the region.

The Thai economy shrank 2.6% in the first quarter, compared to the same period last year, according to the government's economic-planning agency Office of the National Economic and Soial Development Council, or NESDC. The yearly contraction for the fourth straight quarter was smaller than the contraction of 4.2% recorded in the fourth quarter of 2020.

On a seasonally adjusted quarterly basis, the Thai economy grew by 0.2%, following 1.1% growth for the quarter ending December 2020.

"The outbreak should be controlled by June onwards," said NESDC secretary-general Danucha Pichayanan in a press conference. "Smooth vaccination is an important factor for Thai economy to expand," he added.

During the first quarter, Thailand was hit by second and third waves of the virus. The second wave, which evolved in mid-December and lasted until early February, led to shorter operating hours without alcohol sales at restaurants in areas such as Bangkok. Businesses such as bars, karaoke pubs and massage spas that were seen as vulnerable to virus infections were ordered to be closed.

The third wave is ongoing, but, as it only began in late March, its adverse effects have had a smaller on the first quarter. But the epidemic is still the largest of its kind to hit the kingdom. Restaurants in pandemic-affected provinces were asked to serve only take-away meals. People in those areas were asked to refrain from traveling across provinces, and also to work from home as much as possible.

After outcry from the restaurant industry, the government started allowing dine-in services from Monday, even in the hardest-hit provinces. Still, restaurant revenue will remain low, as seating capacity is limited to 25%. The economic impact will be more visible in the gross domestic product for the second quarter.

The restrictions slowed private consumption spending, which fell 0.5% on the year in the first quarter, toppling from a 0.9% growth recorded in the fourth quarter of 2020.

A lack of tourists did not help the economy. Although the Thai government is eager to open up the tourism-dependent country, the virus waves have disrupted inward visitor flows. Service exports, which include spending by nonresidents such as tourists, dropped 63.5% in the three months ended in March. Exports of goods grew for the first time in four quarters, recording a 3.2% increase. 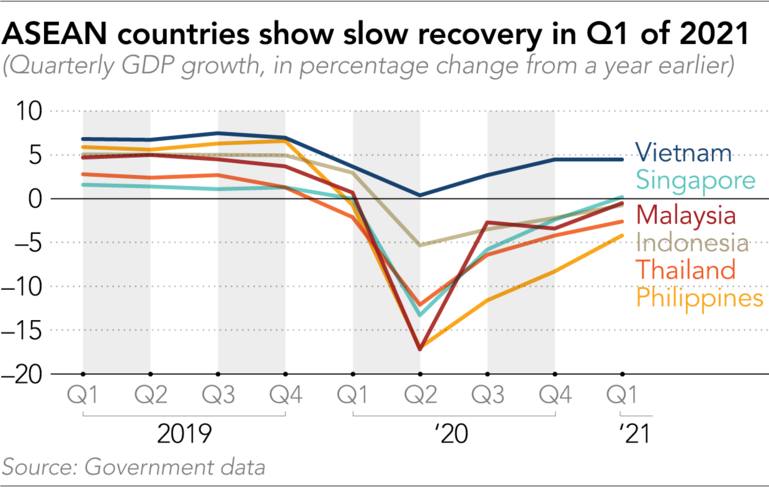 Apart from Thailand, other countries in the region have seen yearly economic contractions in the first quarter, with the Philippines at -4.2%, Indonesia -0.7% and Malaysia -0.5%. All of these countries experienced local outbreaks of the coronavirus which disrupted economic activities in the quarter.

Meanwhile, Singapore (0.2%) and Vietnam (4.5%) were the only two among the six major regional economies to have posted positive growth. "Both have benefited from strong manufacturing output and an expansion in the wholesale and retrial trade sectors," said Sung Eun Jung, an economist from Oxford Economics. "They also have a better record of containing domestic COVID outbreaks, which will help to sustain the ongoing recovery in domestic demand," she said.

For most of the ASEAN countries, the second quarter of 2020 was the first period in which they felt the influence of the pandemic throughout the three months. Because of the base effect from that period, it will be easier for the regional economies to record yearly growth in the current quarter.

However, the future is still cloaked in uncertainty due to the recent resurgence of the virus across the region. Due to a cluster traced to Singapore's Changi Airport, the city-state resorted from Sunday through June 13 to the tightest restrictions seen since last year. Residents are now only allowed to go out in pairs, down from the hitherto limit of five people. Like in Thailand, restaurants will be restricted to only takeout meals and deliveries.

The progress of vaccination programs in each country will impact people's spending. On May 5, the Bank of Thailand made economic projections based on certain scenarios. If 100 million doses of vaccines are distributed in 2021 to achieve herd immunity by the first quarter of 2022, the central bank expects the economy to grow by 2.0% in 2021 and 4.7% in 2022.

"Relatively slow vaccine progress in the region and mutant viral strains may add uncertainty to the pace of economic recovery," said strategist Margaret Yang from Daily FX in Singapore. "We are seeing an uneven road to recovery across different sectors and different countries. The gap could remain in place into the second quarter as economies struggled with virus, inflation and unemployment," she added.