New car sales in SE Asia climb 5% in November, up for 2nd month BANGKOK -- New-car sales in six major Southeast Asian markets rose 5% on the year in November last year, with Indonesia, the biggest market, holding the key to getting the region's market back onto a strong recovery track.

Total unit sales in that month came to 300,905, marking the second straight month of growth led by Thailand and the Philippines. 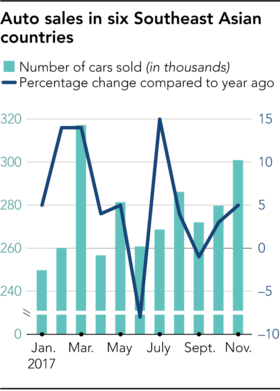 While sales in Indonesia and Vietnam stagnated, the Philippines appeared to have posted the largest one-month sales.

Sales in Indonesia declined 5% to 96,191, marking the first negative sales growth in two months. An industry official said that a stricter screening for auto loans in the country is weighing on sales. Its weak economic growth has apparently led financial institutions to adopt a more cautious approach.

The impact was especially evident in the passenger car segment. Sales of what an industry organization categorizes as "affordable energy saving cars," with engine displacements up to 1.2 liters for gasoline-powered vehicles, slumped 30% to about 19,000.

November's sales in Vietnam also declined 13% to 24,752 as many people put off purchases in anticipation of reduced prices for import cars from Thailand and other neighboring countries after the import levy is eliminated based on ASEAN rules.

It was the eighth consecutive month for Vietnam to record a year-on-year decline.

Covering the shortfall in those two countries are the markets in Thailand and the Philippines. Thailand, the second-biggest market, saw a 21% sales increase at 78,082. It was the highest figure for the month of November in the past four years including 2016, when sales dropped sharply following the death of King Bhumibol Adulyadej. 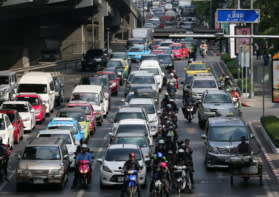 Traffic packs a street in Bangkok. (Photo by Keiichiro Asahaera)

Japanese automakers, which have a strong presence in the Thai market, enjoyed two-digit sales growth. Market leader Toyota Motor, meanwhile, struggled due to weak sales of Hilux pickup trucks. Toyota is scrambling to turn around the situation by revamping the design of the front part of the Hilux to appeal to the Thai market.

New car sales in the Philippines increased 22% to 45,013 units, scoring a double-digit gain for the seventh month in a row. This was the first time monthly sales had ever topped 45,000 units.

The steep increase was attributable to last-minute demand as the government is expected to raise the commodity tax early this year.

Sport utility vehicles and pickup trucks sold especially well. Sales of the Toyota Fortuner, the best-selling SUV in the country, ascended 24% to some 4,000 units.

In the pickup segment, Ford Motor's Ranger logged a 2.5-fold sales gain to 969 units, closing in on the top-ranked Hilux.

New car sales in the six countries in the January-November period of 2017 posted a 5% year-on-year increase to 3,033,305 vehicles. Sales in the whole of 2017 are thought certain to exceed the previous year's roughly 3.2 million for the second consecutive yearly gain.

In 2018, the structure of sales in the Southeast Asian auto market, led by Thailand and the Philippines, is expected to collapse. If sales in Indonesia, which account for nearly a third of total sales in Southeast Asia, remain weak, the regional market likely will face higher hurdles to sustainable growth.