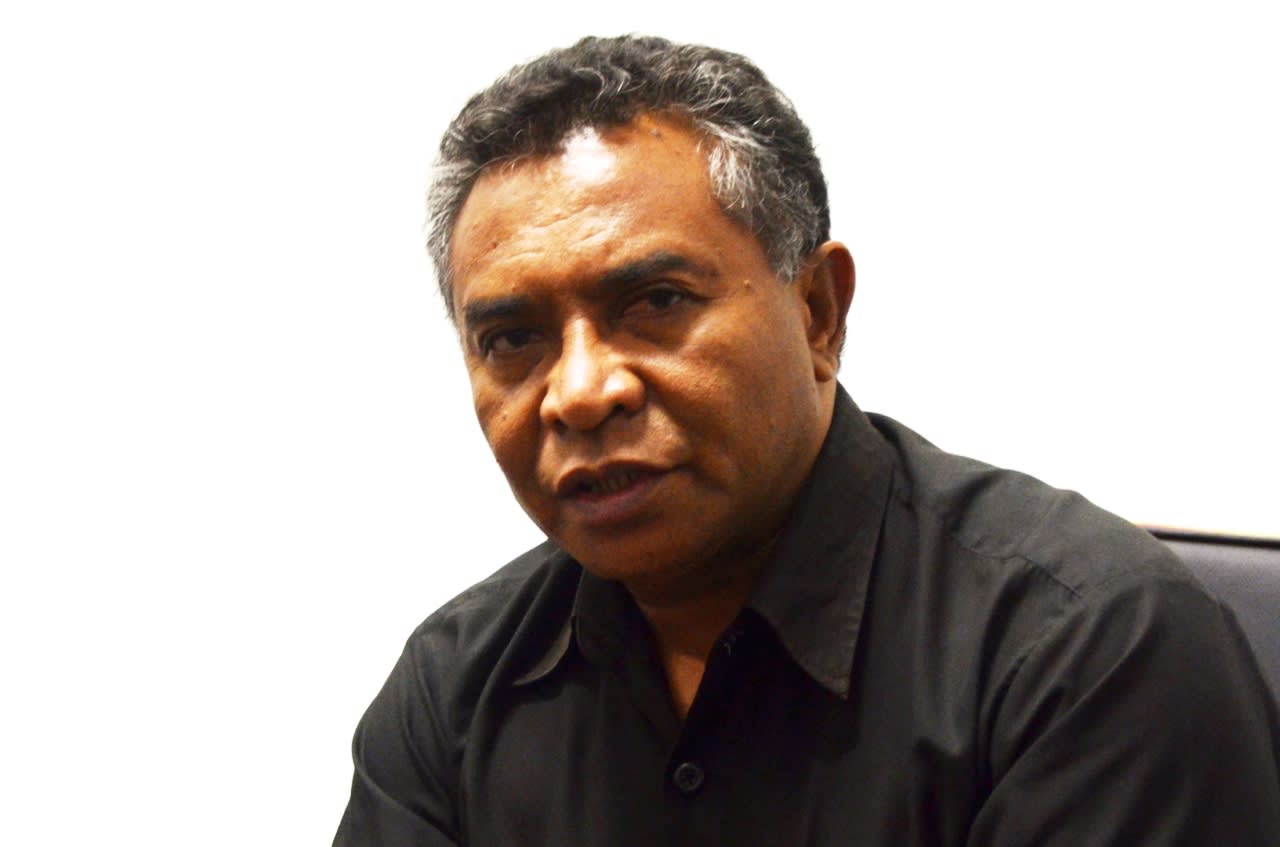 DILI -- East Timor's new prime minister says he wants to improve healthcare and education and start weaning the young country off what he warned is a dangerous dependence on oil and gas.

Rui Araujo, a medical doctor and former health minister in the opposition Fretilin party, took over from independence leader Xanana Gusmao in February. He told the Nikkei Asian Review in an interview at the government's Dili headquarters that "We have to improve service delivery -- health, education, social."

Araujo was recommended for the post by Gusmao as part of an attempt to renew the country's leadership, even though Fretilin was beaten by Gusmao's party in parliamentary elections in 2012.

East Timor, also known as Timor-Leste, faces bleak economic prospects, amid predictions that the oil and gas that account for three-quarters of the country's gross domestic product could run out in less than a decade.

Falling oil prices are hitting East Timor hard. The 2015 budget was based on an early 2014 benchmark oil price of $108 per barrel -- more than twice the January 2015 average of $48. East Timor is the third-most energy dependent economy in the world after South Sudan and Libya, according to the Overseas Development Institute, a London-based think tank.

"We are aware of the risks and we working toward managing those risks," Araujo said, discussing the vital but finite oil and gas reserves.

The government has almost $17 billion saved in a petroleum fund, but estimates based on current spending and energy price forecasts suggest the fund will be depleted less than a decade after the last of the oil and gas has been extracted.

"If current patterns of spending continue then the fund could be empty in five or maybe seven years after the reserves are gone," said Charles Scheiner of La'o Hamutuk, an independent East Timor development monitoring group.

That outcome would be perilous for a country that has become addicted to state spending. Gusmao's seven and a half years as prime minister saw East Timor's economy grow fast, sometimes achieving double-digit annual rates of increase in GDP, as the government spent heavily on infrastructure projects.

The public outlay brought electricity supplies to nearly two-thirds of the population of 1.2 million people, and saw improvements to a dilapidated road network, improving the lives of hundreds of thousands of rural inhabitants living in poverty.

But the spending spree was as much politically motivated as it was economically driven, with Gusmao giving contracts to allies and opponents alike as payoffs for keeping the peace after a near civil war in 2006.

Gusmao's administration was also tarnished by graft allegations -- the former Minister for Justice Lucia Lobato was sentenced to five years in jail in 2012 for corruption -- and cronyism and patronage resulted in sub-standard public works. This is something that the new prime minister says he wants to change.

"We know that many of these projects are not up to the standard and quality we would like [them] to be. These are big investments and will have a medium- to long-term impact on the economy," Araujo said.

The costs of peace

Under Gusmao, state payments increased to veterans of East Timor's independence struggle against Indonesia -- with the former fighters also receiving lucrative government infrastructure contracts as part of Gusmao's peacekeeping program. "One way in which Timor-Leste has bought the peace is through numerous cash transfer programs, predominantly to veterans," the ODI said in a recent report. 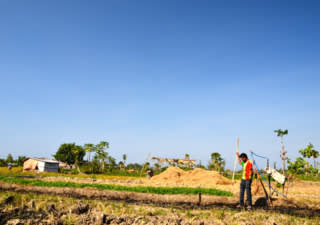 A farm at Halidolar, outside Dili.   © Photo by Simon Roughneen

The new government is revising the 2015 budget put forward by Gusmao's government, in which veterans were allocated more spending than health or education.

Araujo indicated that he was contemplating changing some aspects of the veteran payments system. But he would not confirm that spending cuts are being planned, saying merely: "The policy is to make the best use of the money that is allocated to the veterans."

He added: "We are contemplating the possibility of having some of those funds diverted toward making it more productive -- investing them in a bank so loans can be made available for investment [at the] community level, or creating funds for historical tourism." However, he stressed: "These are not the final policy yet; we are exploring these ideas."

An estimated 70% of the population lives in the countryside, where poverty is unrelenting -- although conditions improved under Gusmao's rural electrification program and also over years of cash handouts to the poor.

But while GDP per capita including oil and gas activity tops $4,000, according to the government, non-oil GDP is just $1,105, according to the World Bank. Some private economists estimate real average incomes at around $800, which more closely reflects the harshness of life in the Timorese hills.

"Diversification of the economy is important to making sure Timor-Leste's economic growth trickles down to the districts," said Noura Hamladji, the United Nations Development Program's representative in East Timor.

Fresh evidence of the extent of poverty in the countryside emerged in a recent study by Seeds of Life, a research organization under the Ministry of Agriculture, Forestry and Fisheries, which suggested that most rural Timorese forage or hunt for wild food -- either fruit, vegetables or animals -- to supplement their rice-based diet. Rob Williams, one of the report's authors, told NAR that "people use wild foods all the time, and more so in famine years."

Araujo said he hopes that improving public spending and public works could kick-start the non-oil economy in areas such as agriculture and tourism. But prospects for developing a more productive agricultural economy are likely to be constrained by hazy land ownership rights. Attempts by previous governments to pass a land law have floundered in the face of the complex land issues. Araujo said his government would try again; a new draft is being formulated by the justice ministry. "We are committed to that, but realize it is not going to be easy. Past governments have started, but it has run into difficulties in parliament," Araujo said.

East Timor has coffee growing potential, but years of neglect have damaged productivity. Tourism also struggles, despite scenic beaches and potential attractions such as scuba diving, whale watching and trekking. East Timor struggles to achieve more than 100,000 visitors a year, compared with up to 4 million visiting the nearby Indonesian island of Bali.

Araujo said: "If we improve the quality of [public infrastructure] works it will provide the basic framework for more investment to come to Timor-Leste in tourism and agriculture."

In a rare foreign investment win for East Timor, Dutch beer maker Heineken has said it will build a brewery at Hera, just outside Dili. Araujo said this was "a very good sign" of rising investor interest in his country.

"Timor-Leste offers an excellent environment for foreign investment," said Vinay Mathur, general manager of Heineken Timor. The brewer will employ 200 people and create an estimated 800 spin-off jobs, according to Heineken. However, in a display of prudence, the new prime minister cautioned against expectations that similar projects would be announced during his time in office.

"We have to be realistic and not expect billions of dollars of foreign direct investment to flow into Timor-Leste in the next two and a half years. At least we will be able to set a strong foundation for that to happen after 2017," he said. Parliamentary and presidential elections are due in 2017.

In the meantime, the country remains dependent on oil and gas. There are hopes that an untapped field, known as Greater Sunrise, can be developed, which could bring of tens of billions of extra dollars into the East Timorese economy, depending on global energy prices.

But there are hurdles still to be surmounted. One is East Timor's plans for a liquefied natural gas processing plant on its south coast, which have been resisted by companies with rights to drill in Greater Sunrise.

The field's value to East Timor is also contingent on a resolution of maritime boundaries between East Timor and Australia. The two countries had agreed to shelve efforts to finalize a boundary. However East Timor says it wants to reopen discussions.

"The position of the current government is that we want to revisit the maritime boundaries in light of international law," said Araujo. "There are preliminary talks to that end. We know Australia's position but we are open to discuss those areas."