Several global agencies have recently sharply cut India's growth forecast, including the World Bank, which on Oct. 13 slashed its growth projection for the country to 6%, down from an earlier prediction of 7.5% (AP Photo/Channi Anand).   © AP
KIRAN SHARMA, Nikkei staff writerOctober 19, 2019 19:50 JST | India
CopyCopied

NEW DELHI -- A major warning on the worsening state of the Indian economy has come from one of this year's Nobel Prize winners, Abhijit Banerjee, a professor at the Massachusetts Institute of Technology.

The Mumbai-born, Kolkata-raised Banerjee, 58, is the second Indian economist -- also the second Asian -- to win the honor after Amartya Sen. He was awarded the 2019 Nobel economics prize jointly with his French-American wife Esther Duflo, also a faculty member at MIT, and Harvard professor Michael Kremer for their work in battling poverty in India and elsewhere.

The trio introduced a new, experiment-based approach to obtaining reliable suggestions about the best ways to fight poverty, which involved dividing the issue into smaller, more manageable, questions -- such as the most effective interventions for improving educational outcomes or child health.

According to the MIT professor, speaking this week, the Indian government at the moment needs to focus on reviving demand instead of worrying about monetary stability.

"The [Indian] economy is doing very badly, in my view," Banerjee, an alumnus of New Delhi-based Jawaharlal Nehru University, said in response to a question during a joint press conference with Duflo at MIT after the Nobel prize was announced. 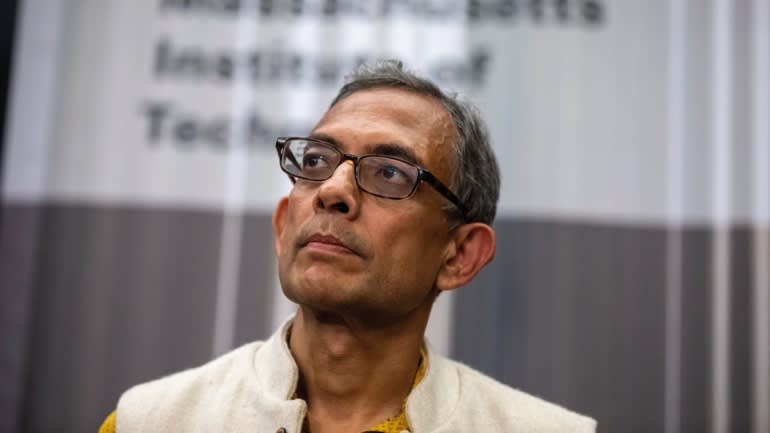 Abhijit Banerjee, joint recipient of the 2019 Nobel prize for economics, at a press conference at the Massachusetts Institute of Technology on Oct. 14.    © AP

"The government has a large deficit but right now it's sort of at least aiming to please everybody by pretending to hold to some budgetary targets and monetary targets," Banerjee said. "My view is that the economy is going into a tailspin and it's the time when you don't worry so much about monetary stability and you worry a little bit more about demand, and demand is a huge problem right now in the economy."

He pointed to recently released numbers by the National Sample Survey, which come out every one-and-a-half years and give the average consumption in urban and rural areas in India. "The fact that we see in that is that between 2014-15 and 2017-18 that number has slightly gone down. That's the first time such a thing happened in many, many, many, many years. That's a very glaring warning sign."

Banerjee's comments follow several global agencies sharply cutting the growth forecast for India, including the World Bank, which on Oct. 13 slashed its growth projection for the country to 6%, down from its April prediction of 7.5%, for the current fiscal year. India's economy grew 6.8% in the last financial year which ended in March.

In his comments on the Indian economy, Banerjee also referred to the "enormous fight" in India about the accuracy of data released by the government of Prime Minister Narendra Modi.

He said that the government had a particular view of data, in that it labeled everything it found inconvenient as wrong. "But, nonetheless, I think, this is something that even the government is increasingly recognizing [there is] a problem. So, the economy is slowing very, very fast. How fast? We don't know because there's a dispute about data, but I think fast."

Banerjee was among 108 economists and social scientists from across the globe who in March came together to release an open letter entitled 'Economic Statistics in a Shambles', in which they voiced concern about "political interference" in India's statistical machinery and called for the country's statistical organizations to be given back their institutional independence and integrity.

Ahead of the April-May national polls in which Modi returned to power for a second five-year term, Banerjee had also advised the opposition Indian National Congress on its election manifesto's minimum income guarantee scheme, known as Nyay (justice), under which the party had promised each of the 50 million poorest families in India an annual payment by bank transfer of 72,000 rupees ($1,012).

"Abhijit [Banerjee] helped conceptualize Nyay, which had the power to destroy poverty and boost the Indian economy," Congress leader Rahul Gandhi wrote on Twitter, while congratulating Banerjee on winning a Nobel prize. "Instead we now have Modinomics, that's destroying the economy and boosting poverty."