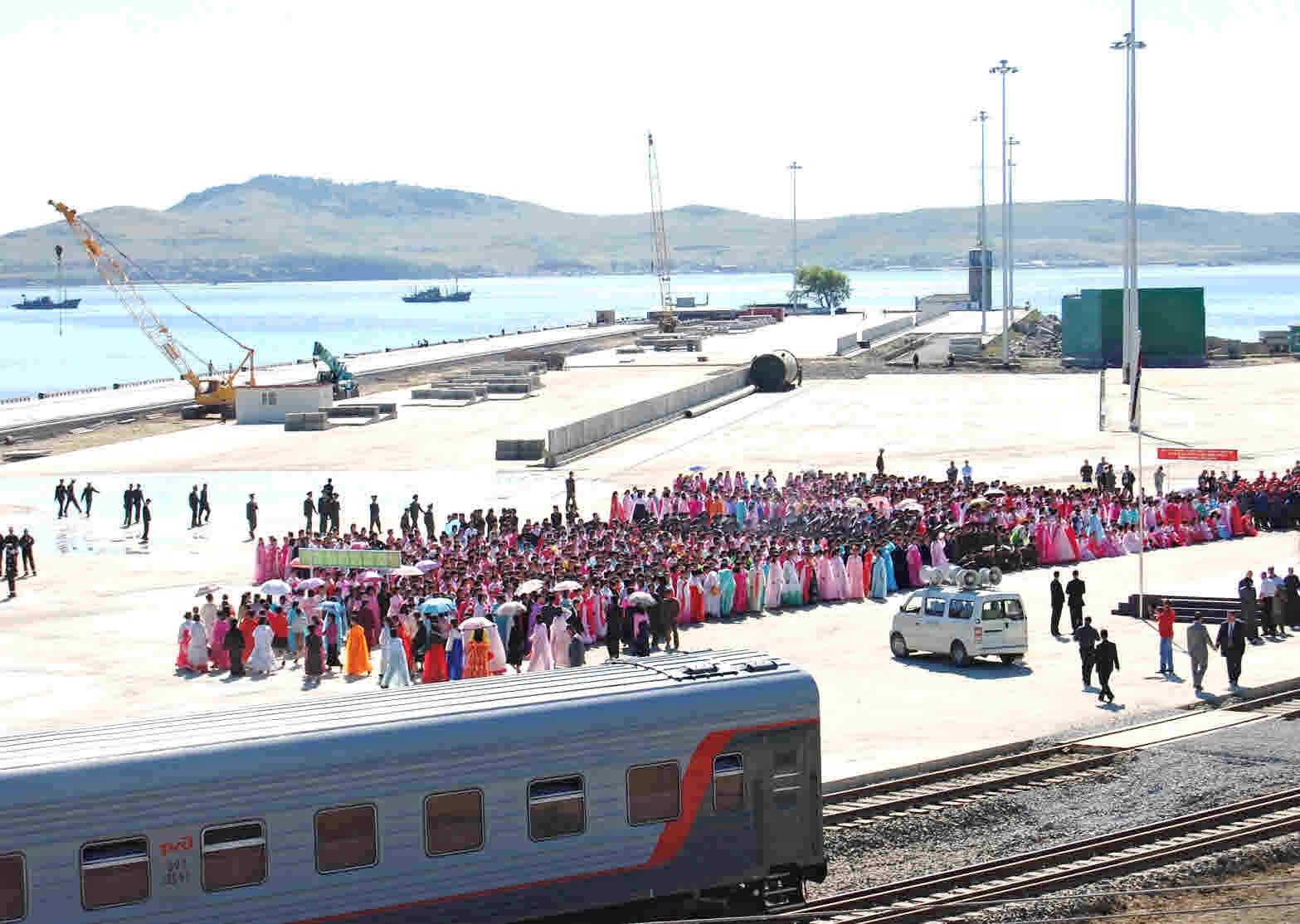 Rason, a North Korean port on the Sea of Japan, is linked with the Russian Far East via a railway that opened in September 2013.

MOSCOW -- Russia has noticeably stepped up efforts to foster relations with North Korea, focusing on economic cooperation. As they embrace, both countries are casting a wary eye on China.

There are plenty of signs that the two are cozying up. According to Russian media reports, the authoritarian regime in Pyongyang has decided to grant Russian business executives unrestricted use of cellphones and the Internet. Apparently, this privilege applies to Russians alone.

North Korea has also decided to simplify business visa application processes for Russians. And in June, the two countries agreed to settle their trade bills in rubles, with a goal of boosting bilateral trade tenfold by 2020.

At a meeting in the eastern Russian city of Vladivostok on June 5, the two governments discussed a significant number of joint projects, according to diplomatic sources from both sides. They struck a deal to explore for gold in places such as Pyoktong County, in the province of North Pyongan. They continue to consider an arrangement through which gold from those mines would be exchanged for old Tupolev 204s, a type of Russian commercial jet.

The governments reached another agreement for the development of resources such as magnesite and nickel in the North Korean province of South Hamgyong. Russia is to submit a list of businesses that will participate by Oct. 1.

A Russian company will develop a gas station network in North Korea in another pact. The governments discussed using mine concession rights as payment for Russian companies upgrading North Korean power plants as well.

What is driving Russia and North Korea into each other's arms?

Russia in May signed a record $400 billion natural gas deal with China. But excitement over this boon for business is tempered by concern about becoming too dependent on China. Fears of growing Chinese influence on Russia's far eastern frontier have been swirling for a while. Russian President Vladimir Putin's fraying ties with the U.S. and Europe -- a result of the conflict over Ukraine -- is only exacerbating such worries in Moscow.

Pyongyang, too, is believed to be keen to reduce its reliance on the world's No. 2 economy. U.N. sanctions severely limit North Korea's trading options, so China accounts for 90% of the state's import-export activity.

This puts North Korea in a difficult position when Beijing frowns upon its actions, as apparently happened last December. North Korean leader Kim Jong Un had his uncle, Jang Song Thaek, executed that month. Jang, a former vice chairman of the country's National Defense Commission, had long served as the main conduit with China.

Alexander Galushka, minister for the development of the Russian Far East, trumpeted his country's good relations with North Korea following the June 5 intergovernmental meeting. He emphasized Pyongyang's decision to treat Russian businesses differently than those from any other nation, including China.

Still, it is hard to say whether the relationship will progress smoothly. Resource development projects, which will form the core of the cooperation, need time and heavy investment to bear fruit. Even then, profitability is not guaranteed.

Most Russian businesses, for their part, are hesitant to move into North Korea. Political instability is one of their primary concerns.

Some believe Russia's real motivation is to bolster its military and diplomatic strength. Russian media said the Vladivostok meeting also yielded an agreement to discuss another possibility: sending Russian navy auxiliary vessels to the key port of Rason in northeastern North Korea, and perhaps anchoring some ships there.

U.S. and European diplomats in Moscow say the Kremlin's overtures are aimed at ensuring Russian influence on the Korean Peninsula, especially in the event the North and South eventually reunite.