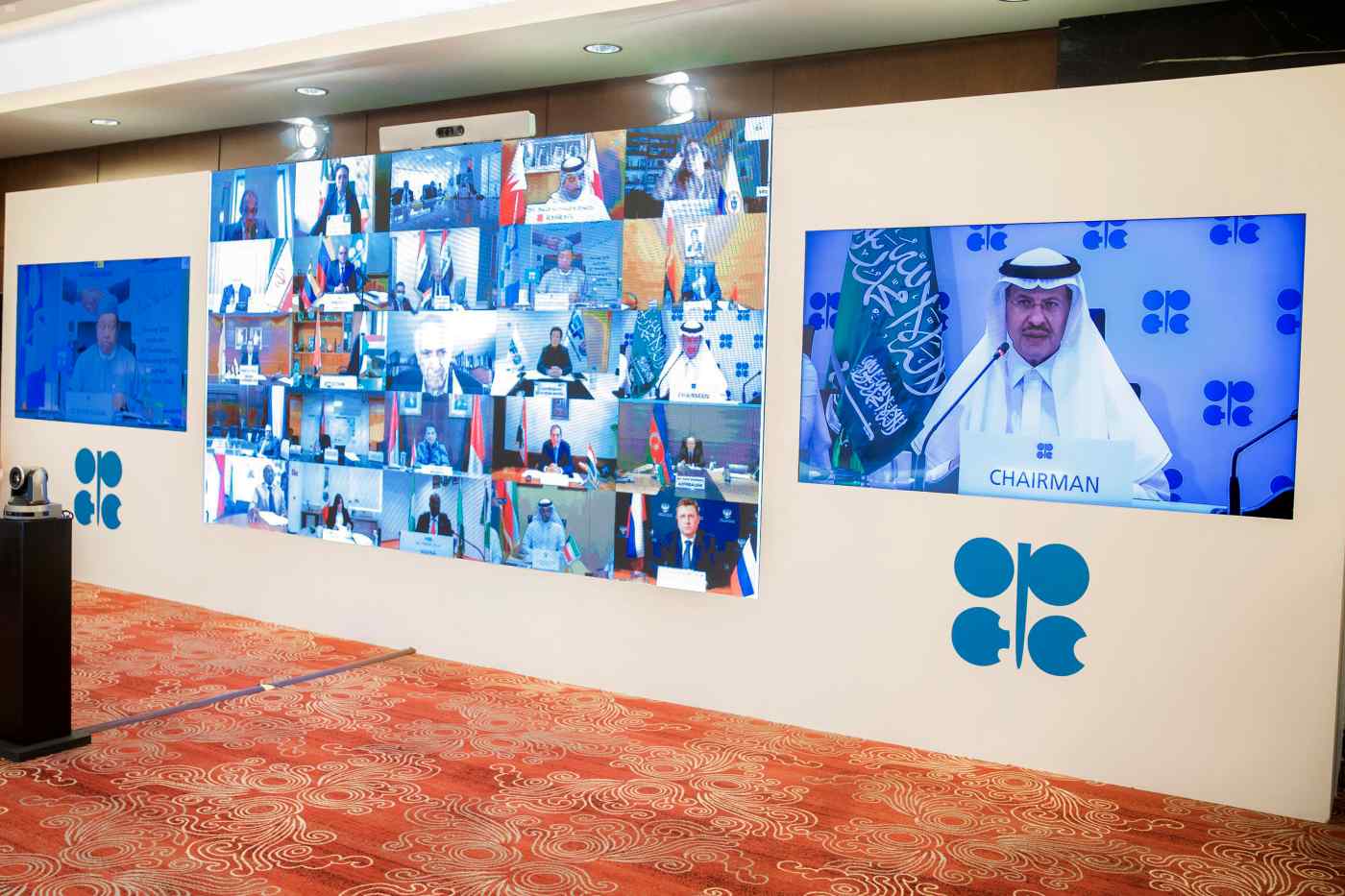 BAKU/DUBAI/LONDON (Reuters) -- OPEC and allies led by Russia agreed on Sunday to a record cut in output to prop up oil prices amid the coronavirus pandemic and said they had an unprecedented deal with fellow oil nations, including the United States, to curb global oil supply by 20%.

Measures to slow the spread of the coronavirus have destroyed demand for fuel and driven down oil prices, straining budgets of oil producers and hammering the U.S. shale industry, which is more vulnerable to low prices due to its higher costs.

The group, known as OPEC+, said it had agreed to reduce output by 9.7 million barrels per day (bpd) for May and June, after four days of talks and following pressure from U.S. President Donald Trump to arrest the price decline.

The biggest oil cut ever is more than four times deeper than the previous record cut in 2008. Producers will slowly relax curbs after June, although reductions in production will stay in place until April 2022.

"The big Oil Deal with OPEC+ is done. This will save hundreds of thousands of energy jobs in the United States," Trump wrote on Twitter, thanking Russian President Vladimir Putin and Saudi King Salman for pushing the deal through.

"I just spoke to them... Great deal for all," Trump said.

OPEC+ sources said they expected total global oil cuts to amount to more than 20 million bpd, or 20 percent of global supply, effective May 1. OPEC had the same figure in its draft statement but removed it from the final version.

Oil demand has dropped by around a third because of the coronavirus pandemic. Brent oil prices opened slightly down at around $31.30 per barrel on Sunday, less than half of their levels at the start of the year.

Total global cuts will include contributions from non-members, steeper voluntary cuts by some OPEC+ members and strategic stocks purchases by the world's largest consumers.

Three OPEC+ sources said the International Energy Agency (IEA), the energy watchdog for the world's most industrialised nations, would announce purchases into stocks by its members to the tune of 3 million bpd in the next couple of months.

The IEA said it would provide an update on Wednesday when it releases its monthly report. The United States, India, Japan and South Korea have said they could buy oil to replenish reserves.

Trump had threatened OPEC leader Saudi Arabia with oil tariffs and other measures if it did not fix the market's oversupply problem as low prices have put the U.S. oil industry, the world's largest, in severe distress.

Canada and Norway had signalled a willingness to cut and the United States, where legislation makes it hard to act in tandem with cartels such as OPEC, said its output would fall steeply by itself this year because of low prices.

The OPEC+ deal had been delayed since Thursday, however, after Mexico, worried about derailing its plans to revive heavily indebted state oil company Pemex, balked at the production cuts it was asked to make.

Mexican President Andres Manuel Lopez Obrador said on Friday that Trump had offered to make extra U.S. cuts on his behalf, an unusual offer by the U.S. leader, who has long railed against OPEC.

Trump said Washington would help Mexico by picking up "some of the slack" and being reimbursed later. He did not say how that would work.

A previous agreement by OPEC+ to cut production this year fell apart because of a dispute between Russia and Saudi Arabia, triggering a price war that brought a flood of supply just as demand for fuel was crushed by the coronavirus pandemic.

Global oil demand is estimated to have fallen by around 30 million bpd as more than 3 billion people are locked down in their homes due to the outbreak.

Banks Goldman Sachs and UBS predicted last week that Brent prices would fall back to $20 per barrel as cuts would not be enough to help offset severe demand destruction because of the restrictions to curb the coronavirus outbreak.