ALMATY, Kazakhstan -- The sharp decline of crude oil prices is threatening to derail Kazakhstan's economy and send its currency into a free-fall.

Oil is the central Asian country's biggest hard currency earner, and the price plunge compounds other challenges -- including reduced gas exports to China and a general slowdown in trade due to the global coronavirus outbreak.

At a hastily arranged government meeting in the capital, Nur-Sultan, on Monday, President Kassym-Jomart Tokayev pledged to maintain social spending commitments despite possible budget cuts, and ordered the formation of a rapid response team to help stabilize the economy and defend the national currency, the tenge.

In Almaty, the commercial hub, there was a mood of panic on Monday as exchange offices around the city stopped selling dollars after people rushed to convert their tenge. The Kazakh currency weakened from 382 to the greenback to around 400, a historical low.

The turmoil, which erupted on a public holiday when there was no official currency trading, was triggered by oil falling below $40 a barrel, after Russia and Saudi Arabia failed to reach an agreement on cutting output. Their price war is a major headache for Kazakhstan, which based its budget forecasts on oil trading at $55 per barrel.

On Tuesday, Kazakhstan took further measures to shore up its economy, raising its benchmark interest rates by 2.75 percentage points to 12%. It also intervened in the currency markets, spending heavily to stabilize the tenge at 393.6 to the dollar. A line forms outside a currency exchange office in Almaty on March 9, as people rush to change a falling tenge.   © Reuters

Central Asia analysts note that Kazakhstan's overdependence on the hydrocarbon sector leaves its economy vulnerable to oil price fluctuations, as seen in previous crises in 2008 and 2015.

"There has been no structural adjustment made by Kazakhstan to the successive oil crises that have erupted since 2008," Luca Anceschi, senior lecturer in Central Asian studies at the University of Glasgow, told the Nikkei Asian Review.

"Until the government is ready to engage in [politically and literally] costly structural economic reforms, this will be Kazakhstan's only possible response to increased volatility in global energy politics," Anceschi added.

But this is a particularly bad time to be dealing with disruptions in the oil market. Kazakhstan's trade with China -- its No. 2 partner after Russia -- slowed in February amid the ongoing coronavirus crisis. Cargo shipments from China dropped by 43% or 150,421 tons year on year, according to Kazakhstan's Industry Ministry.

In a further blow, PetroChina issued a force majeure notice on March 5, saying that it was cutting imports due to the effects of the coronavirus epidemic. PetroChina had planned to import around 10 billion cubic meters of gas this year from its hydrocarbon-rich neighbor. On Wednesday, Kazakh Energy Minister Nurlan Nogayev told reporters that gas exports to China had been cut by 20% to 25%.

President Tokayev has only been on the job for nearly a year, since Nursultan Nazarbayev, who ruled for 28 years, handed over power. And his first year has been marked by widespread, persistent protests. 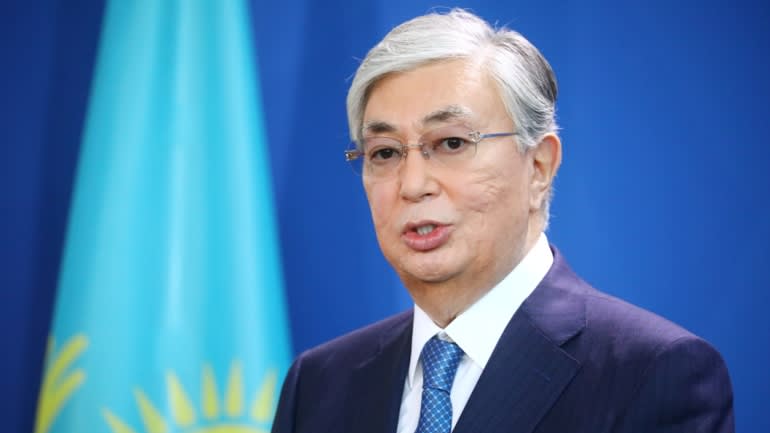 It is with an eye on this unrest that Tokayev and Prime Minister Askar Mamin have stressed the importance of meeting the government's social commitments.

"Our common task is to ensure social stability and employment," Mamin told a government meeting on Tuesday. "I emphasize that all social obligations of the state will be fulfilled. All pensions and benefits will be paid on time and in full."

Despite the government's swift response to the crisis, Anceschi still sees trouble ahead for Kazakhstan. He argues Tokayev's government is "inherently weaker" than Nazarbayev's with fewer options at its disposal to keep the population on its side.

"Declining oil revenues will further limit the regime's capacity to entrench its power through patronage measures targeting the wider population," Anceschi said. "For a leadership that has been in power for less than a year, and already faced several rounds of protests, this is not welcome news."