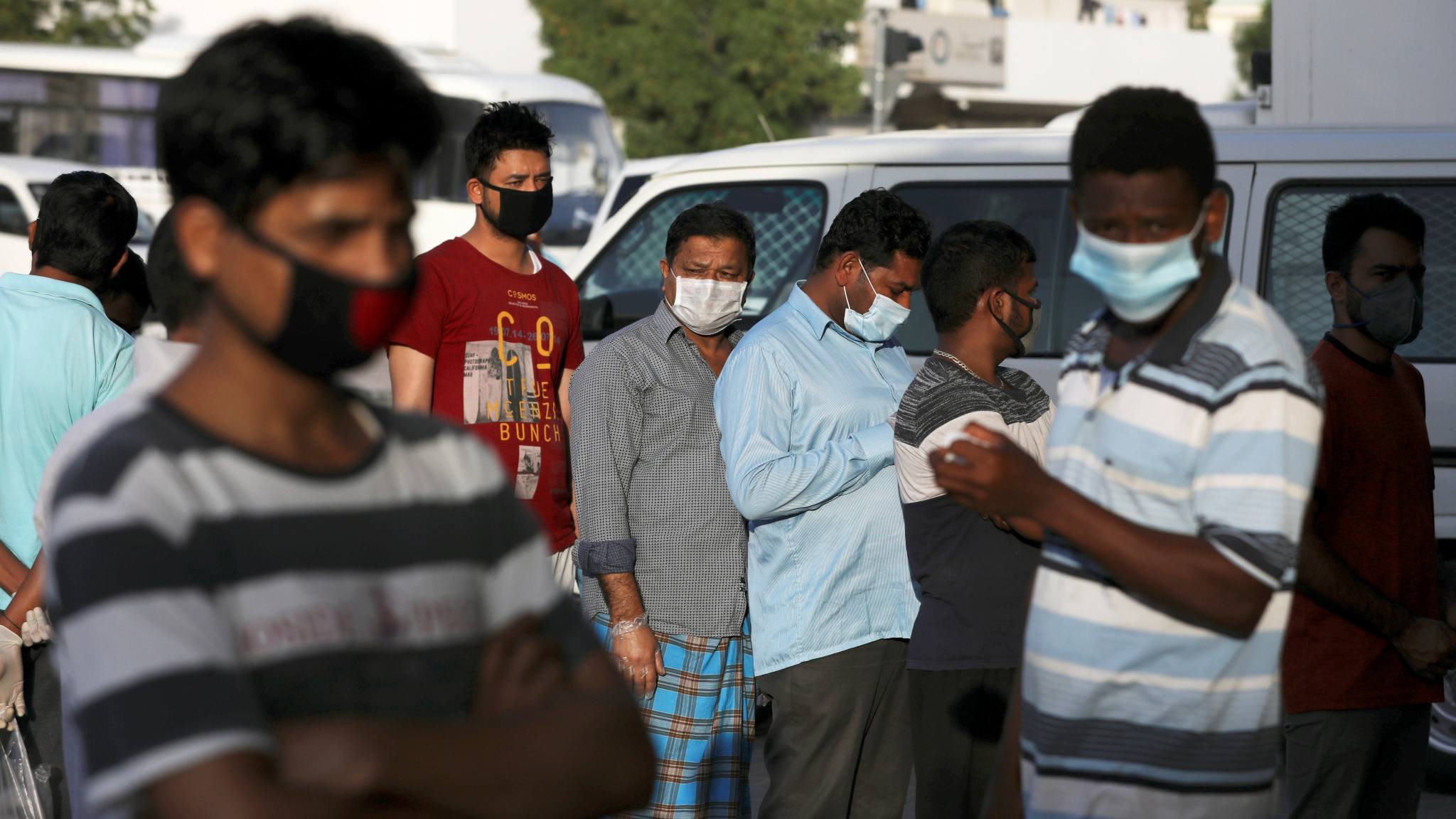 Foreign workers queue outside a corner store in the Al Quoz industrial district of Dubai in April. The region is now on the verge of an exodus of migrant labor.   © Reuters
HIDEMITSU KIBE, Nikkei staff writerJuly 1, 2020 05:35 JST | Middle East
CopyCopied

DUBAI, United Arab Emirates -- For Joseph Sanchez, a Filipino security guard who worked here for seven years, the decision to leave was easy.

The 47-year-old was laid off after the private school that employed him switched to online classes because of the coronavirus outbreak.

"I haven't received four months' worth of pay, but I don't want to stay in this expensive city without a job," said Sanchez, who had diligently sent home three-quarters of his monthly pay of 1,950 dirhams ($530).

Sanchez is one of more than 1 million foreign workers in the Middle East waiting for travel restrictions to ease so they can return to their mostly Asian home countries.

With the pandemic and weak oil prices devastating the labor market, petroleum-producing Middle Eastern nations have favored protecting the jobs of citizens. Migrant workers, who in some cases make up half of these countries' labor forces, have been left adrift.

This saps both these countries' economic strength and the huge flows of remittances that foreign workers send back home -- a vital source of money for consumer spending in Asia.

The coronavirus crisis could wipe out 900,000 jobs in the UAE. Signs of mass outflows of workers are already emerging. Private-school operator GEMS Education said in June that it will close an Indian-curriculum school here in March 2021. Shutdowns of schools for foreign families mark an about-face from the long enrollment waitlists of the oil boom.

In a June report on new challenges created by COVID-19, Jadwa Investment forecasts 1.2 million foreign workers to leave the Saudi Arabian labor market in 2020. But it also sees Saudis' unemployment rate holding steady at 12%, meaning that the newly jobless are mostly migrants. As young Saudis continue to enter the labor market, foreigners have a harder time finding work.

The country pushed to replace migrant labor with Saudi citizens in a policy shift known as "Saudization." But the massive departure of foreigners will disrupt the economy in the short term. Saudis show little interest in low-paying jobs, making the future of the Saudization plan uncertain.

Coronavirus outbreaks in overcrowded housing have prodded Arab states of the Gulf to address what international human rights groups have criticized as poor labor and living conditions for migrant workers. But foreign workers are largely ineligible for economic or income security measures available to citizens.

The COVID-19 crisis has added a new element to these disparities. Kuwaiti actress Hayat al-Fahad sparked a backlash after proposing to quarantine migrant workers in the desert to free up hospitals for Kuwaitis. She later said she misspoke.

Foreigners make up about half of the workforce in Gulf countries, with Asians -- particularly those from India, Pakistan, the Philippines and Sri Lanka -- accounting for 60% to 70% of this segment. These migrants plugged labor gaps in the oil-exporting nations while sending funds to their home countries, serving to support economies on both sides and creating a win-win situation.

The mass returns will also deal at least a short-term blow to their home countries, whose weakened employment markets will be hit by waves of new job seekers. Already-fragile health care systems could be further strained by returnees infected with the virus.

Money sent from migrant workers is the largest financial inflow into low-income countries, exceeding direct investment, securities investment and international aid. Remittances to low- and middle-income countries will decline a fifth on the year in 2020, the World Bank predicts.

Global remittances are "private income transfers that are countercyclical" and help lessen the blow of economic shocks in home countries, International Monetary Fund Deputy Managing Director Antoinette Sayeh and a co-author argue in a recent article.

But migrant-source countries now face the double punch of "capital flight as well as a drop in remittance flows," putting more pressure on their economies, fiscal health and societies, the authors warn.