Even when they go home, tourists keep buying things from Japan TOKYO -- A wider swath of Japan is benefiting from the foreign tourist boom as more visitors find their way to the countryside and become smitten by stuff made in Japan.

Let's look at nights as a yardstick. International visitors in 2016 spent 69.38 million nights in Japan, according to the Japan Tourism Agency. 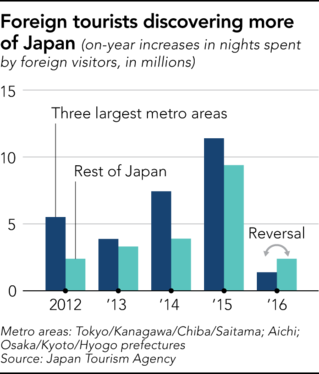 It was the first time that the increase in the three metropolitan regions was less than that for the rest of Japan.

That's because foreign tourists, especially repeat visitors, are showing a growing inclination to see the countryside. International tourists visiting Japan for at least a second time stood at 62% in the April-June period, up 4 points from two years earlier.

Each locale has unique attractions, and more local governments are seeking to capitalize on them.

Ojika, a town composed of a group of islands in Nagasaki Prefecture, for instance, has turned several traditional and unused private houses in the town into lodging and other tourist facilities. The plan was proposed by an American researcher of Oriental cultures. The municipal government has remodeled the houses in ways that meet the needs of foreign tourists, making the bathrooms brighter and wider, for instance.

Elsewhere, five governments in the four central Japanese prefectures of Gifu, Nagano, Ishikawa and Toyama have developed a bus tour that stops at three Michelin-starred facilities.

Another notable trend among foreign visitors is their tendency to buy more Japanese products after returning home. This is reflected in trade data for cosmetics.

Many Chinese consumers are turning to the internet to buy beauty products from across borders. In 2016, Japanese cosmetics exports surpassed those of imports for the first time, according to an analysis of Finance Ministry data by the Japan Cosmetic Industry Association. Kose in March began making cosmetics at a new facility at its main Gunma plant. The investment is designed to expand its domestic production capacity by 30% to meet growing Chinese demand, particularly for its popular Sekkisei series of skin care products.

Shiseido, Japan's leading cosmetics company, is now building what will be its first new domestic plant in 37 years, in Ibaraki, Osaka Prefecture. The plant will begin producing lotions and other products in in 2020.

Shiseido is executing a strategy that focuses on Chinese tourists to Japan. It is betting that many of these visitors who experience its products while in Japan will become brand loyal.

To assess the correlation between spending by foreign tourists in Japan and Japanese exports, the institute analyzed export data for cosmetics, clothing, health care products, electric appliances as well as food and drinks.

"The popularity of these Japanese products among foreign consumers is contributing to job creation in local areas," said Takuya Hoshino, an economist at the institute.

The tourism surge is also changing how local economies are structured.

In Hokkaido, for instance, spending by tourists is expected to replace public investment as the principal source of income.

The Dogin Regional Research Institute, an arm of the Hokkaido Bank group, predicts that in three years tourist spending is likely to surpass public investment on the northernmost main island. 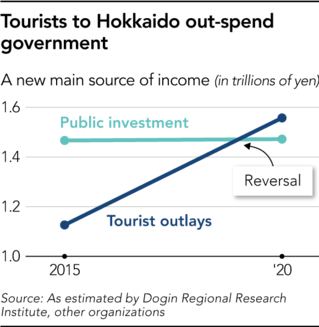 Final demand for public investment in fiscal 2020 will be 1.47 trillion yen, up 0.4% from fiscal 2015, according to an estimate by Hokkaido Electric Power's research institute.

"Tourism is one of the few effective means for local economies to change their structures so that they can achieve growth driven mainly by private-sector demand," said an economist at the Dogin Regional Research Institute.

Kutchan, a Hokkaido town popular among overseas skiers, is receiving a flood of private-sector investment. The result is more condominiums and tourist facilities.

"The local construction industry is thriving," said the Kutchan Tourism Association. "Over the past three to four years, we've never heard about a single case of bankruptcy among businesses in areas around the Niseko region," famous for its powder snow.

Kutchan puts skiers right next to the slopes of Niseko.

From 2012 through 2016, the ratio of consumption by foreign tourists to local GDP increased in 43 of Japan's 47 prefectures.

The trend is raising hopes for minor economies that have long suffered from aging and contracting populations.