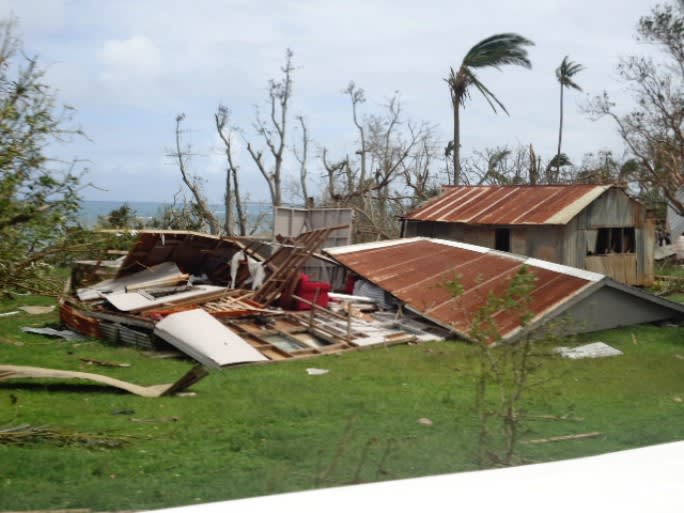 An innovative insurance program has eased the financial shock these catastrophes bring to the small islands, but the trial run is scheduled to end in October. The program's future will in July be debated at a meeting of Pacific-island economic ministers in the Solomon Islands. The latest signs suggest it may be extended.

The two-year Pacific Catastrophe Risk Insurance pilot program was initiated by the Secretariat of the Pacific Community, the World Bank and the Asian Development Bank, with financial support from the Japanese government. The program covers the Marshall Islands, the Cook Islands, Samoa, the Solomon Islands, Tonga and Vanuatu. Launched in January 2013, it has been handled by major reinsurance companies Sompo Japan Insurance, Mitsui Sumitomo Insurance, Tokio Marine & Nichido Fire Insurance and Swiss Re.

"Participating countries have requested that the pilot be extended to allow them more time to mull over insurance and work out how to make it sustainable," said a spokesperson for the secretariat.

The program addresses the fact that the islands have small economies and cannot alone afford insurance schemes that provide adequate coverage for damage they periodically suffer. In the past, they were forced to rely on international donor assistance and limited national budgets when disaster struck.

The program ingeniously combines country-specific disaster risks into a regional portfolio, which cuts premiums by half. Payouts are based on computer-modeled projections rather than actual loss and damage assessments, which take longer to calculate.

For Tonga, the program brought immediate benefits after Tropical Cyclone Ian battered it on Jan. 11-12. The country, whose gross domestic product grew just 0.3% last year, received a payout of $1.27 million within two weeks, allowing for rapid assistance to the northern Ha'apai Islands, where 5,000 were affected by the storm.

"The funds paid for sending out relief, such as tents, food, generators, fuel and water supplies, all of which had to be transported to the affected areas by plane and sea," Leveni Aho, director of Tonga's National Emergency Management Office, told the Nikkei Asian Review."It has been a big help to getting our people back on their feet as soon as possible."

The story is similar across the region, where more than 9.2 million people have been affected by natural disasters over the last 60 years, with the total damage put at more than $3.2 billion.

Such disasters are a major contributor to economic hardship in a region where 35% of its 10 million people live below the poverty line. Yet despite endemic risks, only 3% of potential losses are insured in developing countries, compared to 45% in industrialized nations, according to the World Bank, which also estimates average disaster losses in the Pacific islands total as much as $284 million per year, equivalent to about 1.7% of regional GDP.

The organizers of the insurance program have also helped the islands improve their disaster-response capabilities. Since 2006, sophisticated disaster-risk information for every country in the group has been developed, including state-of-the-art hazard maps on 500,000 structures for earthquakes and cyclones.

Olivier Mahul, program manager of the World Bank's Disaster Risk Financing and Insurance Program, said it is clear the insurance market is willing to underwrite risk in the Pacific on good terms, and that island nations see value in subscribing.

But one major hurdle remains before the program achieves long-run sustainability. "The challenge is for all Pacific island countries to allocate funds for premium payments from their budgets," said Mahul. "The more developed states are willing to pay the premiums by themselves. Other, smaller islands are willing to contribute toward premiums, but need additional assistance."

The total insurance premium of $45 million for the first year of the pilot program was financed by the Japanese government, which funds the program as part of its broader aid package to the Pacific region.

This year, participating states contributed to the premium, which rose to $67 million. The Cook Islands paid in full, while Japan subsidized the others.

Ian Fry, an international environmental law and policy expert at the Australian National University, Canberra, said many Pacific island states would face serious challenges in paying the full cost of premiums. He also pointed out that the insurance program does not cover climate change. If it did, countries that emit a lot of carbon might be held liable for causing extreme weather and asked to contribute to the premiums, thereby expanding the pool of funds available for insurance, he said.