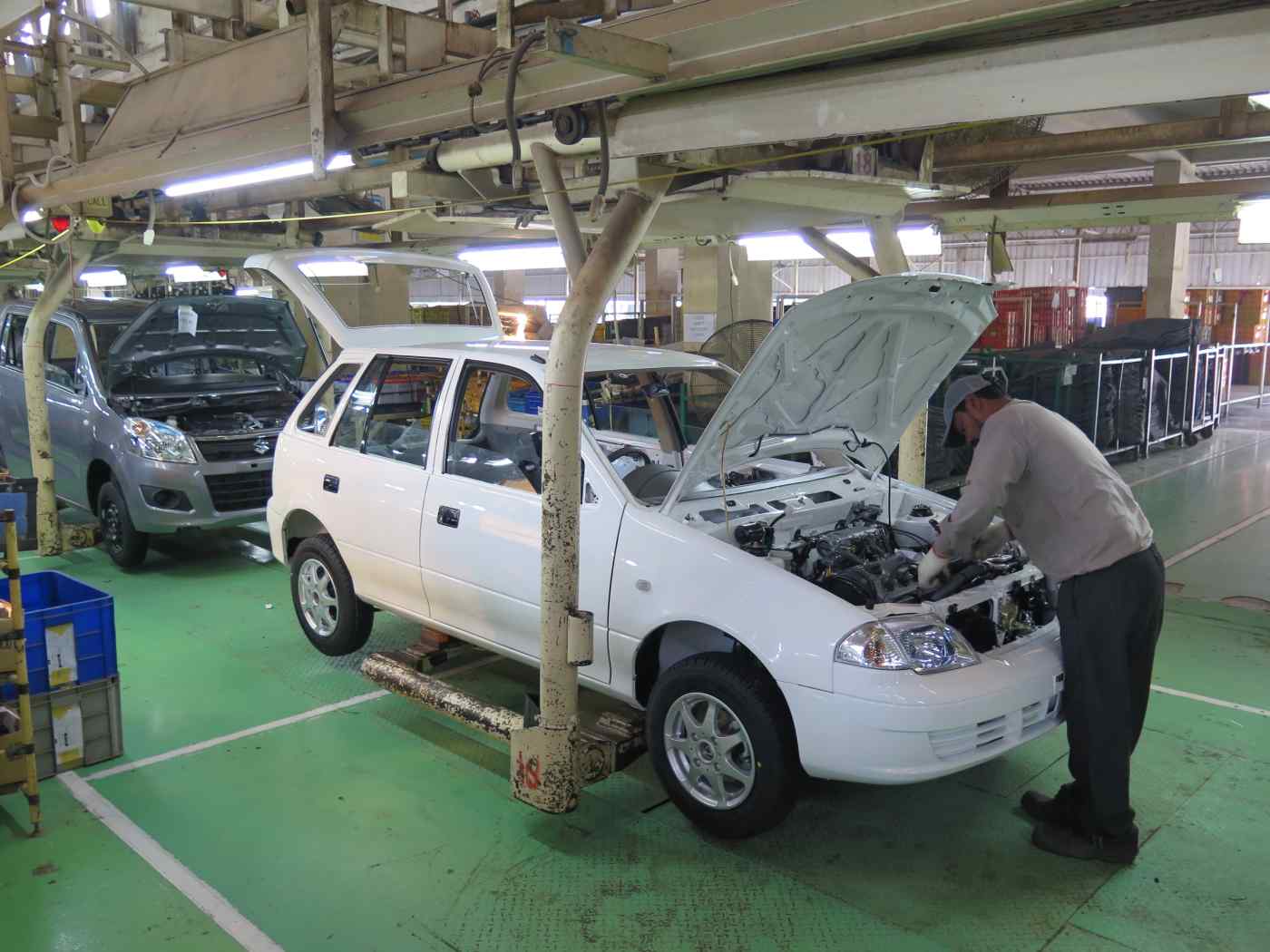 KARACHI As Pakistan aims for emerging-economy status, its automotive industry is already motoring along at a healthy clip. Annual passenger car sales recently topped 200,000 units for the first time, and all of the country's automakers are planning production increases to satisfy brisk domestic demand.

New players are also flocking to this market of 200 million, lured by government incentives and the opportunity to tap a growing middle class. For now, there may be enough growth to go around, but these new faces -- which include the likes of Renault of France and Kia Motors of South Korea -- could threaten the dominance of Japanese makers.

STRONG TAILWINDS Pakistan saw a record high of roughly 218,000 passenger cars sold in fiscal 2016, which ended last June. The leader was Pak Suzuki Motor, a subsidiary of Suzuki Motor, which landed an order from the eastern province of Punjab for 50,000 cars. The province's government plans to use the vehicles as taxis as part of a job-creation program. 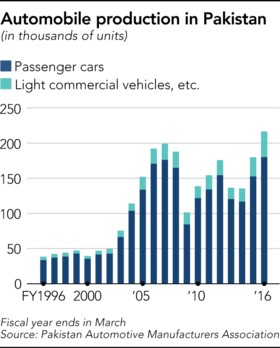 Indus Motor, a joint venture between Toyota Motor and local conglomerate House of Habib, is doing well with its mainstay Corolla, reporting that sales grew 11% on the year to 65,000 in fiscal 2016. "The market is so brisk that production can't keep up," said Indus Motor Vice Chairman Toshiya Azuma.

Azuma expects even more growth to come. "Demand in India, our next-door neighbor, is about 4 million cars [including commercial vehicles] a year, so annual sales of about 600,000 cars is well within reach in Pakistan." The country has a population one-sixth that of India.

Indus Motor Chairman Ali S. Habib, a member of the family behind HoH, visits the company's auto plant every week for meetings. While he is cautious about ramping up production too quickly -- "Safety is our priority. We'd like to avoid too much overtime" -- he is positive about the future. "The market is very strong. [Expansion will be] step by step."

Honda Motor joint venture Honda Atlas Cars also saw record-high sales, at 35,000 Civic and City units for calendar 2016, up about 50% on the year. Atlas group No. 2 and CEO of Atlas Honda (a separate entity from Honda Atlas Cars) Saquib H. Shirazi said, "The new Civic is the primary driver. We're expecting sales of around 50,000 in 2017."

These automakers are benefiting from a number of converging tailwinds. Household incomes are rising along with Pakistan's growing economy, while prices for gasoline and diesel fuel are on a downward trajectory. Interest rates on auto loans have fallen sharply, averaging below 10% compared with nearly 18% in fiscal 2008.

More recently, the China-Pakistan Economic Corridor initiative has spurred investment in the country's infrastructure, raising hopes that Pakistan's highway network will be completed before long.

Pak Suzuki sold about 128,000 cars in Pakistan in fiscal 2016 and controlled about 58% of the passenger car market. "Sales of models other than taxis, which are subject to special demand, grew by about 20% on the year," said Managing Director Hirofumi Nagao. In response to this spike in demand, the company plans to invest $460 million in a new plant.

NEW FACES WANTED In March 2016, the government unveiled its Automobile Development Policy 2016-2021, which provides various incentives for automakers entering the market, such as reduced import taxes on parts. Seizing the opportunity, Kia Motors has partnered with Lucky Cement, the core company of the Yunus Brothers Group, one of Pakistan's leading conglomerates. The two companies plan a total investment of $115 million. "We will undertake full-segment production, from compacts to sedans," said Lucky Cement CEO Muhammad Ali Tabba.

The company plans to start producing 25,000 cars annually by the end of 2018 at its plant in the Port Qasim Industrial Zone in the Karachi suburbs. "The car market in Pakistan has been monopolized by Japanese brands. Now, demand will go up, a lot of new highways are coming, and consumers' minds are very active. So it is a good time to enter the market," Tabba said. The company will target a segment between Suzuki's compacts and Toyota's Corolla, considered a luxury model in this market.

Renault is making a similar move, applying to the government for an automaking permit at the end of last year. Hoping to start production in 2018, it has signed a memorandum of understanding with the Sindh Board of Investment and has begun a feasibility study. The SBOI says investment will total $100 million, with production to begin with 6,000 cars in the first year and eventually expand to 50,000. Audi of Germany has also voiced interest in production in Pakistan.

Opinions are split over the policy of giving newcomers special treatment. Nagao of Pak Suzuki has asked the government for a two-year tax break as a condition for its investment in a new plant. But Azuma of Indus Motor is more upbeat: "The ADP can be seen in a positive light, as it will promote the medium- and long-term growth of the automobile and automotive parts industries in Pakistan by attracting new entrants."

Shirazi of Atlas is likewise positive, saying, "We don't mind more automakers coming, because consumers will have more choice."

Such a scenario is looking increasingly likely given the many tailwinds blowing through Pakistan's automotive market.