BANGKOK -- These are hard times for Thailand's vaunted nightlife industry.

Nightclubs and bars, which contribute more than $5.5 billion a year to the overall economy, are the country's hidden "dollar box." But regulations that went into effect in late March to halt the spread of the new coronavirus are delivering a body blow to establishments, with cries of despair increasingly heard from proprietors.

"The coronavirus is going to kill the bar business," said Nutthapon, a 37-year-old manager of one establishment in Bangkok. From March 22, restaurants in the city's greater metropolitan area were banned from offering anything other than takeout or delivery services. The edict was expanded on March 26 to include the entire country.

"I need to pay rent and my employees' salaries," said Nutthapon. "Right now, I'm getting by through breaking into my savings. But I don't know if I can survive for two more months."

Bangkok is famous around the world as a city with a booming nighttime economy. Its nightclubs and luxurious rooftop bars atop competing hotels draw rave reviews. CNN chose it as one of the world's best party cities, along with Las Vegas and others. Such a reputation helps bring in a trove of foreign currency.

It is a major part of the broader tourism business in which Thailand ranks fourth in the world by revenue, while the value brought in per visitor is higher than in Japan. The industry is estimated to be worth an annual 211 billion baht ($6.52 billion).

But nightlife areas, which are often densely packed, are linked to the spread of the coronavirus. A cluster infection broke out at a Bangkok nightclub in mid-March, leading the metropolitan and national governments to clamp down harder. Besides restaurants and nightlife areas in principle halting business, regulations also forbid people from going out at night and allow authorities to get tough with young people who gather in groups. 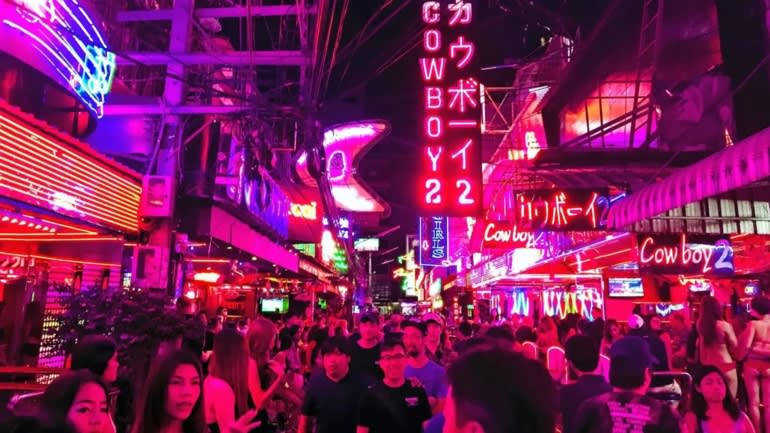 Restaurants are at present shut down until the end of April, while the prohibition on going out at night is in effect "until further notice." That means all restaurants in Thailand will be closed for at least one month. If bars and pubs are shut that long, "it will take three to six months to recover," said the manager of another bar.

The government will extend relief to small- and medium-sized businesses, including through allowing the deduction of personnel expenses from taxable income and by reducing social insurance premiums. But "many bars can barely keep [their financing] going, and they'll collapse with things like this," said a restaurant manager.

Women who work in red-light districts, meanwhile, will not benefit from government measures and if laid off their day-to-day lives will turn desperate.

"Save the old or save the economy?" That was a headline one Thai newspaper ran, provocatively summing up the choice authorities in many countries now face. That is whether to prioritize social distancing measures that have shown effectiveness in preventing the spread of COVID-19, especially to the most vulnerable -- including older people -- or allow economic activity to resume at the risk of higher transmission rates.

Some Thai bars have introduced innovations to preserve business, such as delivering cocktails in airtight packaging. But additional government regulations banned the sale of alcoholic beverages from April 10 to the end of the month, snuffing out such creativity while underscoring the severe circumstances businesses face.

In some ways, the importance of the "night economy" can be hard to see on the surface, but its contribution to overall growth is significant. Hopes are that foreign tourists will return after the lockdown is eventually lifted. But if they don't, a full-scale economic recovery will remain elusive, further delaying the dawn so many are anxiously awaiting.