PENANG, Malaysia -- Penang, an island-state in northern Malaysia, is fishing around in its surrounding waters for ways to promote growth and diversify its economy.

After building up a semiconductor industry that contributed to the industrialization of Malaysia in the 1970s, and also developing a significant tourism industry, Penang's latest venture is offshore farming.

"Each of these longfupan is two kilograms," said Yeoh Hock Choon, beaming proudly as he hauled a pair of dragon tiger groupers from a floating cage in the middle of the sea. It has taken the 38-year-old breeder two years to reach this point.

Locals prize the grouper for its outstanding flavor when cooked, usually by steaming. Yeoh, an ethnic Chinese, is one of 180 aquaculture operators who also farm sea bass, shrimp, and tiger prawn in these waters, supplying major seafood restaurants in Malaysia, as well as Singapore and Hong Kong.

Yeoh's farm, located in the Malacca Strait some 20 minutes offshore from Sungai Udang, consists of 55 cages with six-meter dimensions that contain in total roughly 30,000 fish. Business is good, he reports. Demand is always strong for quality sea fish, and the recent depreciation in the ringgit has made things more attractive for foreign buyers.

Yeoh worked locally in aquaculture for 10 years before striking out on his own three years ago. He is among the beneficiaries of the state government's policy to award business licenses directly to business owners. 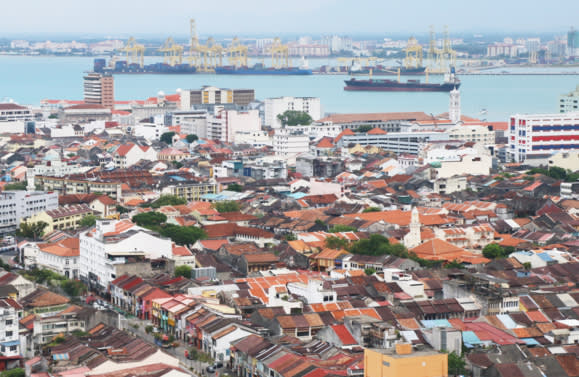 Georgetown has prospered as a tourist destination after gaining Unesco World Heritage listing eight years ago. (Photo by Shinya Sawai)

"We actually grew this industry from nothing," Guan Eng, Penang's chief minister, told the Nikkei Asian Review. When his opposition Democratic Action Party took office in 2008, among the "abuses" uncovered was awarding businessmen with powerful connections rights to sub-rent to aquaculture operators.

"This was unethical and we decided we must stop the practice," said Lim. Under his administration, licenses could only be given to owner-operators who met the required criteria. They in turn pay 3,600 ringgit ($871) annually to rent an 8,000 sq.-meter patch of sea.

The policy has attracted qualified operators from neighboring states, and stimulated competition. Indeed, while Penang is one of the smallest states in size, it is now the largest in terms of aquaculture production, with output of 68-million kg of seafood in 2014 with a wholesale value of 1.16 billion ringgit. According to official figures, Penang ranked fifth in the 2008 state rankings, with production valued at only 180 million ringgit. 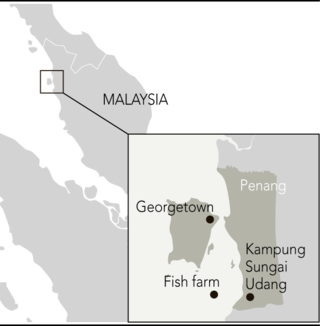 The industry has provided jobs for many in Sungai Udang, a village of about 4,000, processing fish and providing cold storage and logistics. Chew Thong Tai, a transport operator, has trucks leaving around noon each day on the four-hour journey to Kuala Lumpur. Johor Baru and Singapore are ten hours away, with the produce in high demand among wholesalers and restaurants there.

"Demand for saltwater fish is always higher than freshwater due to the taste," Chew said. Dragon tiger grouper sells wholesale for about 30 ringgit per kilogram, but restaurants in Kuala Lumpur charge at least six times that on the plate.

Penang likes to bill itself as an "entrepreneurial state" that creates business opportunities without getting involved with state-owned holding companies -- a mainstay of Malaysia's corporate scene.

"The business of the government is to stay out of business," said Chief Minister Lim. He says he is content to simply facilitate the process and let "experts" optimize the business and make the profits.

That approach might also explain why Penang is the most favored state for foreign direct investment among the thirteen in Malaysia. It attracted some $1.05 billion in 2015 -- about 20% of the country's total. Among the multinationals it has onshore already are Bosch, Intel, and Osram.

The service sector has also developed, contributing half of Penang's income in 2014 from less than 42% in 2010. Investment in tourism got a boost after Georgetown, the state capital, gained Unesco World Heritage status in 2008.

Penang has promoted itself as a center for shared services and business process outsourcing. Companies like AirAsia, Kerry Logistics, Hewlett Packard, and Wilmar International have all relocated back office operations there in recent years.

Penang's agricultural sector, which includes aquaculture, may only have accounted for 2.3% of the state's gross domestic product in 2014, but that leaves plenty of room for growth. Yeoh has big dreams, and recently started breeding lobsters for new high-margin customers. "I hope to sell my produce to Japan," he said.