The bid by Pfizer, the U.S. pharmaceutical giant, to take over AstraZeneca, one of Britain's largest pharma groups, has generated uproar across a broad range of circles in the U.K. Pfizer's chief executive was hauled before a parliamentary committee and asked about his plans for research and development. Influential newspapers have slammed the takeover, claiming it would destroy the country's science base. Within political circles, the rhetoric has been vicious. 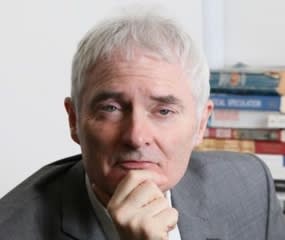 The debate is about much more than the future of Britain's pharmaceutical industry. What is at stake are such fundamental issues as who should control large listed companies and what should be the role of finance in the broader economy.

In the U.S. and U.K. systems, shareholders have long ruled supreme. As the collective owners of companies, they have the right to buy and sell corporate control. Maximizing shareholder value has become the overriding goal of managements. Until now, politicians have usually kept their noses out of it.

In France, protectionism and distrust of financial markets are traditions -- indeed, President Francois Hollande is currently blocking General Electric's bid for the industrial group Alstom. Resource nationalism is on the rise in successful economies like Australia, too.

But for the progenitor of Anglo-Saxon capitalism to question one of its key tenets is another matter entirely.

On the other side of the world, meanwhile, the movement is in the opposite direction. East Asian financial markets are growing in scale and sophistication and governments are working to build, or in Japan's case to rebuild, thriving equity cultures. If the U.K. loses faith in the value of finance, Hong Kong and Singapore will seize the opportunity, and even Japan may dust off its abortive plans to turn Tokyo into an international financial center.

Remember, it was a protectionist "own goal" by the Americans that sparked London's ascent to global financial pre-eminence. In 1963, new taxes destroyed Wall Street's Yankee bond business, enabling the Eurodollar bond market to grow into a huge and highly profitable franchise for the then-stagnant City of London. History could repeat itself as the EU prepares a boatload of new regulations, restrictions and punitive levies such as the financial transactions tax.

The difference in East Asian and Western attitudes to finance has its roots in the dynamics of their respective financial crises and, more importantly, in the contrasting policy response. Financial crises have erupted throughout history in a wide range of different systems. They will continue to erupt as long as human beings remain social animals susceptible to the emotions of fear and greed.

When boom turns to bust, the system that spawned the crisis loses credibility. In the West, the trauma of the Lehman shock of 2008 and the ensuing financial crisis runs deep. Politicians and opinion leaders are running scared of the popular mood, which remains sour and sensitive to such issues as economic inequality, immigration and job security -- which gained little traction when the good times were rolling. "Rock-star economist" Thomas Piketty's new tome, "Capital in the Twenty-First Century" -- essentially a rejection of the very concept of the equity risk premium -- is a worldwide best-seller.

Resentment toward the financial industry has been compounded by the widespread and justifiable belief that people guilty of gross incompetence or worse -- including politicians and regulators -- were never held properly accountable. Furthermore, the globe-spanning "too big to fail" mega-players remain comfortably in place, whereas startups and boutique deal-makers drown in torrents of costly new regulation.

The bursting of Japan's economic bubble more than two decades ago happened in very different circumstances. The system responsible was hardly capitalist at all, being micromanaged by financial bureaucrats, supposedly for the national good. There were no stock options or lavish bonuses for bankers or corporate managers, and domestic takeovers were as rare as skinny sumo wrestlers.

In reaction, Japan has been slowly but steadily moving toward a more market-friendly financial culture. Last year's takeover of Tokyo Electron, one of the jewels in Japan's high-tech crown, by Applied Materials of the U.S. generated little adverse comment, let alone parliamentary hearings. Recent announcements of share buyback programs by such corporate bluebloods as Nippon Telegraph and Telephone, Mitsubishi Corp. and Mitsui & Co. indicate greater attention to shareholder value.

The Asian crisis of 1997-1998 was a more complex affair than the "crony capitalism" label suggests, but there can be little doubt that it triggered enormous economic and political change in countries as wide-ranging as South Korea and Thailand. The threat of bankruptcy purged excesses and swept away politically driven vanity projects. Nothing was too big to fail, not even the ruling family of Indonesia. Since then, the general tendency has been toward more openness and transparency and the empowerment of rising middle classes.

Capitalism will thrive in the 21st century, as it did in the preceding two centuries despite many setbacks. For all its flaws, no better system for promoting economic vitality has been discovered. Western countries should concentrate on making markets more competitive and efficient rather than offering bounteous rewards for failure, both individual and institutional. In this evolving new world, GE and Pfizer might be better off shopping in Japan, Southeast Asia or India.

Peter Tasker is an analyst with Arcus Research in Tokyo.