According to the latest official figures for approved foreign investments in information and communications (where BPO-related investments are recorded), there was a 34% year-on-year drop in the second quarter -- the fourth consecutive quarter of decline.

Rey Untal, president of the Information Technology and Business Process Association of the Philippines, said "security concerns" have spooked investors. "I will not minimize those concerns," he told reporters. "They are contributing to the headwinds that we are experiencing."

The BPO industry has become a pillar of the Philippine economy in the past decade, contributing significantly to its upturn. Foreign companies have benefited from a low-cost workforce with good English-language proficiency, tax breaks, and a relatively stable political and security environment. Last year, the Philippines accounted for 12.6% of the global outsourcing market, generating $23 billion in revenues and employing 1.3 million people. The sector's significance means that a slowdown could easily shave 0.2-0.3 percentage points from gross domestic product next year, Credit Suisse said on Sept. 15.

The setback to the BPO sector has been evident in office rentals. In Metropolitan Manila, where most BPO companies are located, the sector accounted for just 41% of new office leases from January to August compared to 65% last year, according to Leechiu Property Consultants. Megaworld, a unit of Alliance Global Group, and the country's largest BPO office provider, confirmed a decline in demand but did not provide figures.

Investors have been unnerved by developments in Mindanao, and some BPOs opted not to expand in 2017. "That's primarily because many of their clients perceived the country risk profile of the Philippines [to be] climbing," said chief executive David Leechiu.

Foreign investments in Philippine BPO sector have been in negative territory for four consecutive quarters. The initial dip came after President Rodrigo Duterte showed hostility toward the U.S., which accounts for around 70% of the Philippine BPO industry's turnover. Donald Trump's victory in the U.S. presidential election in November with his protectionist rhetoric led to a further downturn, and the terrorism crisis in the southern Philippines dented the country's image of stability. 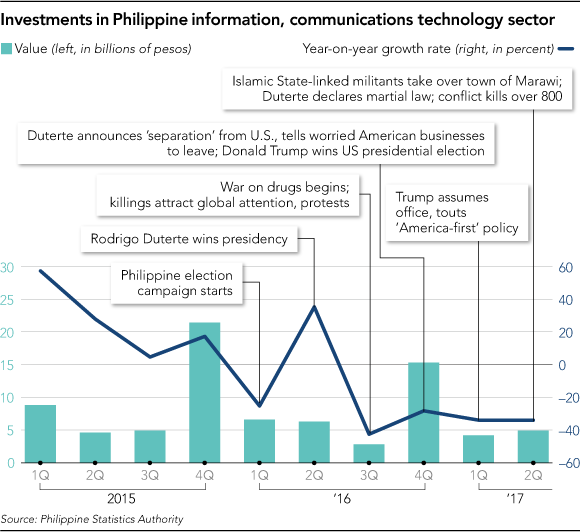 In late May, militants with ties to Islamic State group took over parts of the southern city of Marawi, purportedly to establish a "caliphate" in Southeast Asia. Duterte responded by declaring martial law in the entire southern state of Mindanao, and this has been extended until Dec. 31. Military operations to retake the city continue, and 800 lives have already been lost. The siege received considerable international media attention in its early stages, but this has abated. Philippine trade and investment officials continue to blame the U.S. They say Trump's protectionist leanings have prompted U.S. companies to conduct more extensive due diligence. Leechiu said terrorism and the possibility of nationwide martial law have become serious concerns. To spread risk, companies have shifted to Latin America and Malaysia, and back to India which dominated the call center industry until the Philippines overtook it in 2012.

A roadmap launched last year aims to grow the sector to nearly $40 billion by 2022, and employ 1.8 million people.

According to Untal, established BPO players continue to expand but new entrants are skeptical. "We are working closely with our government partners," he said. In Mindanao where some 50,000 BPO employees work around the clock, companies have obtained curfew exemptions for the duration of martial law.

"The Office of the President has been very helpful," said Catherine Ileto, a senior director at Sutherland Global Services, which operates in Davao City.

Duterte is a former mayor of Davao, the main BPO hub in the southern Philippines, and may have taken on board mounting worries. He has toned down his martial law rhetoric, and said it could be lifted before the end of the year. Government forces continue to claim they are on track to end the Marawi siege.

In November, Untal's industry association will host its annual global BPO summit. The plan is to launch a "country-brand narrative" that will burnish emphasis on the indigenous talent in the Philippines that has complemented its enabling environment over the past decade.