Philippine inflation plunges after Duterte steps in to tame prices Food price increases have slowed, helping pull down inflation in the Philippines     © Reuters

MANILA -- Inflation in the Philippines slowed for the first time in nearly a year, in a boost for President Rodrigo Duterte's unorthodox campaign to tame consumer prices.

Consumer prices rose 6% in November, down from 6.7% the previous month, data showed Wednesday. Even so, inflation over the first 11 months of the year averaged 5.2% -- a full percentage point above the central bank's target range of 2% to 4% -- and remains the highest among major Southeast Asian economies.

Slowing food and oil prices were the main contributors to the inflation slowdown. This stems from Duterte's measures, which range from the easing of restrictions on food imports to the lifting of non-tariff barriers to boost supply. The fall in oil prices also contributed to the drop.

The data echoes the central bank's view that prices will start tapering by the end of the year and fall within its target range by 2019. It also proves Bangko Sentral ng Pilipinas, which has tightening interest rates to their highest level in nearly a decade, with room to keep its key policy rates steady when it meets next week and a possible reverse of course next year.

BSP Gov. Nestor Espenilla said the headline figure was "encouraging" as it shows that inflation is responding to both monetary and non-monetary steps.

"There's need to pay close attention to the core inflation trend," he said in a statement. "Monetary policy will need to stay vigilant to keep inflation under firm control amid expected strong economic growth."

Philippine stocks recovered some losses as investors digested the better-than-expected inflation data. As of 10:25 a.m. local time, the Philippine Stock Exchange index was down 1.41% to 7595.01 points, after opening 1.6% lower following heavy losses on Wall Street. 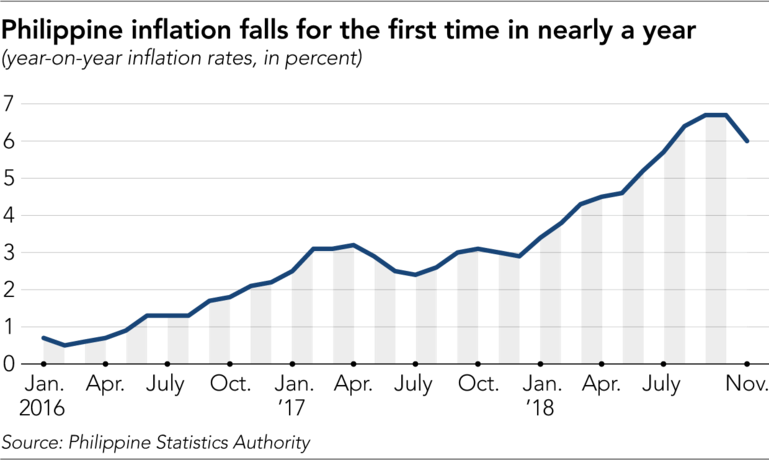 Nicholas Mapa, senior economist at ING Manila, said that it was possible the central bank could reverse its tightening stance as early as the first the half of 2019 should inflation continue to fall sharply.

"The BSP may opt to slash borrowing costs as early as 2Q 2019 not only because of slowing inflation but also because Philippine economic growth is expected to slow in 4Q 2018 and 1H 2019," Mapa wrote in an emailed note. "If a confluence of decelerating inflation, slower GDP and a dovish Fed align, the chances for a BSP two-pronged easing increases significantly."

Inflation has crimped consumer spending, the Philippines' main growth driver, and dragged down economic growth in the third quarter to its slowest pace in three years.

In September, Duterte eased restrictions on food imports and lifted non-tariff barriers to raise available supply. The measure removed middlemen in the supply chain who bloat prices. Duterte has also ordered the "unimpeded" importation of rice -- the erratic supply of the country's staple triggered a surge in food prices.

On Tuesday night, Duterte approved his economic team's proposal to push through with a second round of fuel excise tax increases from next year -- a move helped by falling oil prices.