Duterte throws his weight into debate over 'tariffication' of rice imports MANILA -- Ronald Gabuat regularly waits half an hour to buy subsidized rice at a market in a northern area of the capital, but on a recent visit he had no luck.

"Only a handful of people were able to get any rice," the 42-year-old security guard said. "People were angry with the shortage."

The rice Gabuat was trying to buy is brought in from neighboring countries such as Vietnam and Thailand. Stocks are low because the Philippine government this year deferred imports, believing the country's farmers would be able to meet the needs of households.

That decision is one of a number of problems affecting the Philippines' rice market. At a nine-year high, inflation is another. The central bank has conceded that a series of aggressive interest rate hikes won't begin to have the desired effect until next year.

These two factors have the government looking at a new rice policy to help keep prices in check.

The House of Representatives has approved legislation to replace current restrictions on rice imports with tariffs. Under the so-called "tariffication" proposal, a 35% duty would be levied on rice from other members of the Association of Southeast Asian Nations, and a 180% rate would be applied to rice imports from outside the bloc.

The measure to end the National Food Authority's monopoly on rice import is under debate in the Senate. But with the upper chamber split on the issue, the window to enact it is closing as Congress is scheduled to begin a monthlong break on Friday. And with midterm elections in May, lawmakers are already shifting into campaign mode.

But seeing the cost of rice as an urgent national issue, President Rodrigo Duterte has stepped in to throw his weight behind tariffication.

The leader on Monday called for the "unimpeded" importation of rice. While not an executive order, presidential spokesman Harry Roque said Duterte's move "was the ultimate means to rein in inflation as far as food items are concerned." 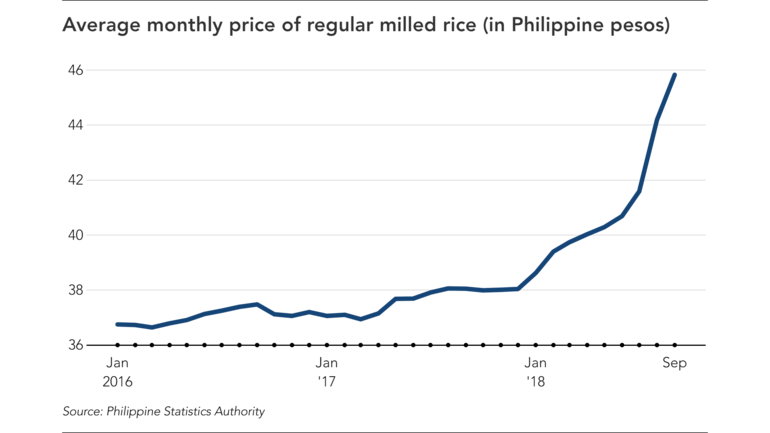 The move could also help stem a decline in Duterte's popularity.

Support for the president stood at 75% in September, 13 points lower than in June, according to Pulse Asia Research. A separate survey showed nearly two-thirds of Filipinos consider controlling inflation as the nation's most urgent concern.

Due to short supplies, the price of rice is rising at a 20% clip. This puts Bangko Sentral ng Pilipinas in a fix. The central bank projects overall consumer price increases of 5.2% this year and 4.3% in 2019. Both figures are beyond the bank's 2% to 4% target range.

BSP Assistant Gov. Francisco Dakila said on Sept. 27 that the tariffication system, if adopted next year, could help bring inflation back into the target range, as it would shed 0.7 of a percentage point from the overall rate.

For now, the central bank is urging government offices to step up their non-monetary responses while it further tightens the country's policy rates. In September, it raised interest rates 50 basis points for the second time in as many months.

Surging prices have shined a spotlight on the country's decadeslong ambition to become rice self-sufficient. Despite the fact that Filipino leaders from the late dictator Ferdinand Marcos (1965 to 1986) to Duterte have shaped agriculture policy around the staple, the Philippines has struggled to produce enough of the grain to feed its population.

The average Filipino consumes over 100 kg of rice a year, and the staple accounts for one-fifth of the spending of poor households. More than 2 million people, or 5% of the labor force, are rice farmers.

In June, Duterte conceded that his government's rice goal is unattainable.

"We will just have to import rice," he said. "I do not believe that we can be rice sufficient."

One reason the Philippines has trouble providing enough rice for itself is that it has failed to adopt the advanced production methods that other Southeast Asian nations use. This failure means it costs more to farm rice in the country than elsewhere in the region. 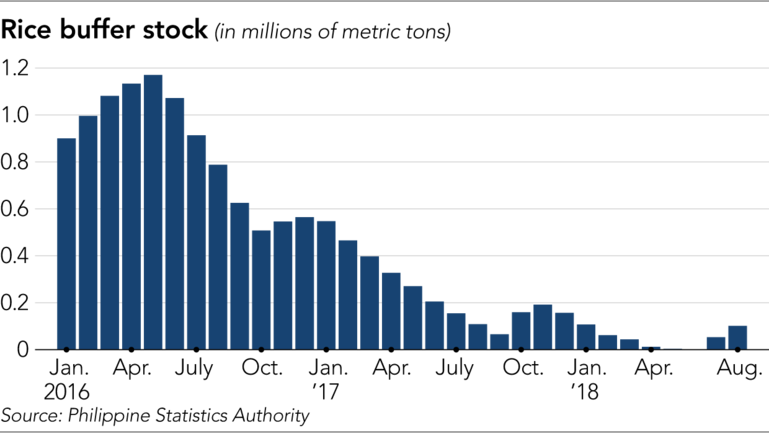 Kelly Bird, the Asian Development Bank's country director for the Philippines, said the current system has failed both to lift farmers' incomes and ease prices.

"Productivity is fairly stagnant," Bird said. "Then we see rice prices are often quite volatile."

"The National Food Authority's [trading system] is not working," she added. "It's important to review that. I think the government's approach in removing quantitative restrictions and replacing them with tariffs are important."

Dr. Ramon Clarete, an economics professor at the University of the Philippines, said that due to low yields, a majority of rice farmers become rice consumers themselves for most of the year.

"This is particularly true if poor farmers have borrowed money from traders who [then compel the farmers] to sell their rice to them," Clarete said.

The market that Gabuat struck out at is around eight minutes by public transport from a National Food Authority warehouse, which stores the imported rice. Some of the market's regulars would not mind having a look inside the store room.

"I don't know," said Gabuat, a father of five, "if the authority is controlling the supply or if there really isn't enough."