MANILA -- The lobby of the Philippine Overseas Employment Administration headquarters was bustling on Feb. 14. Dozens of housekeepers who came home for the Christmas holidays were rushing to complete paperwork and belatedly return to Kuwait. The day before, President Rodrigo Duterte's government lifted a monthlong deployment ban imposed on the Gulf nation after another Filipina maid was beaten to death by her employer.

Jovelyn Lestupido, 38, was among those planning their outbound travel. "My employer wants me to come back immediately. I'm getting a raise," said Lestupido, who was wearing a mask over fears of coronavirus. "The risk of being abused is part of working abroad."

Apart from workers' rights, Philippine policymakers have been preoccupied lately by the potential impact of the new coronavirus on its 10 million migrant workers and the money they send home to keep the $330-billion economy on a solid footing.

But the fatal virus, which has spread beyond its believed origins in China, is raising concerns on the remittance-reliant Southeast Asian nation's ability to sustain growth. Many of its overseas workers are becoming increasingly vulnerable to the virus, while the countries and industries that employ them are facing slowdowns due to the epidemic. Filipino workers filing papers at the Philippine Overseas Employment Administration in Manila which facilitates the deployment of workers abroad. (Photo by Cliff Venzon)

At least 27 Filipino crew members on the Diamond Princess cruise ship in Japan have tested positive for the COVID-19 virus, joining 400 more confirmed cases in the ship.

The cases of the Diamond Princess and the Westerdam, which was denied entry by multiple countries before being finally allowed to dock in Cambodia, have sent the cruise industry into uncertainty. Around 28% of the Philippines' remittances come from sea-based workers.

After the Philippines confirmed its first three cases in late January, Manila was forced to ban travel to and from China, including Hong Kong and Macao, where hundreds of thousands of housekeepers work. Manila on Feb. 18 allowed migrant workers with existing contracts to return to Hong Kong and Macao.

Yet, remittances from Filipinos abroad have historically defied the odds. "In the past, overseas Filipino remittance flows had managed to defy skeptics, posting strong growth even in times of global recession or geopolitical events that caused substantial upheaval of Filipinos in their host countries," said Nicholas Mapa, chief economist at ING Bank.

Inflows remained robust during the outbreak of Severe Acute Respiratory Syndrome, or SARS, in 2003, as well as during the height of the financial crisis in 2008. Growth slowed in the aftermath of the oil supply glut from 2014 to 2016 that hurt Middle Eastern countries, where over 2 million Filipinos work, but deposits from other locations lifted the overall figures.

"Once these temporary barriers or snags are gone, expect the droves of labor mobility to escalate and catch up to these identified destination countries," said Jeremaiah Opiniano, executive director at the Manila-based Institute of Migration and Development Issues.

"And for those Filipinos already overseas and in countries with domestic issues of all sorts, all they can do is hop on to another country."

The Philippine central bank hopes for another 3% growth to bring the remittance inflow to a new record this year, but the target will be reviewed in May to account the impact of the virus, according to Dennis Lapid, director for economic research at the central bank. 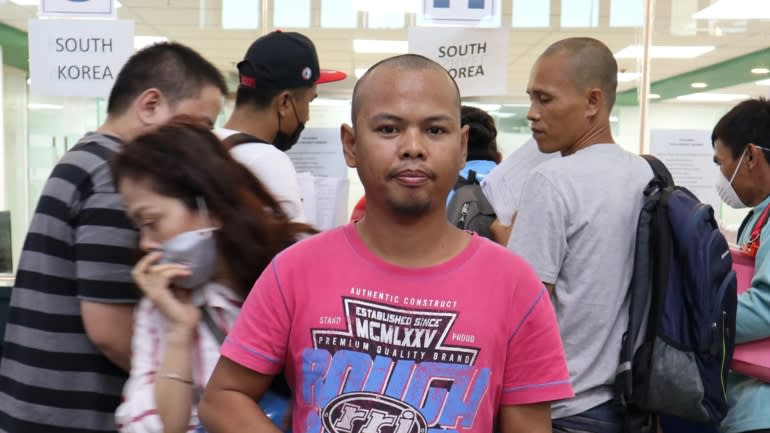 Erwin Samonte, a first-time overseas Filipino worker, applies to go to South Korea to work in a metal factory. (Photo by Cliff Venzon)

But the country's other hopes of keeping remittances robust are found at the Philippine Overseas Employment Administration, which facilitates steady deployment of overseas workers such as Erwin Samonte, 33, who will soon be leaving to work at a metal factory in South Korea -- his first job abroad.

Samonte said his family is concerned about the virus spreading overseas. "I'll just wear masks," he said. "I'm excited and nervous. I want to build a new house for my parents."