MANILA -- At Aboitiz Power's temporary headquarters in the Bonifacio Global City business district, framed photographs of CEO Erramon Aboitiz's ancestors are among the fixtures inside his dimly lit office. The vintage images serve as reminders of the century-old business group's longevity.

The power generation company has been renting its current headquarters, located in the Bonifacio Global City business district of Metro Manila, since 2013. New headquarters are under construction nearby, with completion scheduled for 2021. The relocation of Cebu-based Aboitiz Power, along with parent company Aboitiz Equity Ventures, of which Erramon is also chief executive, is a sign of the group's determination to step onto a larger stage.

Early in November, Erramon spoke with the Nikkei Asian Review about why a company previously content in its home market has decided to pursue opportunities outside of the Philippines, particularly in the Association of Southeast Asian Nations. "We just felt that, given our size, we probably should start looking outside our Philippine borders, and felt there are opportunities in other parts of ASEAN," he said. "We don't want to go too far. We believe in staying close to our borders -- the ASEAN area."

Aboitiz Power is a leading utilities company in the Philippines, with an attributable generation capacity of 2,500 megawatts. Last year, it announced plans to explore a 110MW geothermal plant in Indonesia with local partner PT Medco Power. They are now drilling a second so-called slim hole, which should provide a better assessment of the project's potential.

"If that is successful, then we will go into the full development of production wells, the power plants," Erramon said. Aboitiz Power brought this 300-megawatt coal-fired power plant in Davao on stream in early 2016. (Courtesy of the company)

Erramon aims to have 4,000MW of attributable capacity by 2020 by tapping both regional and domestic opportunities.

"Originally, we identified, Indonesia, Vietnam and Myanmar as the first three countries we would like to look at. But I think we will start looking at other opportunities in the region," he said. He has earmarked $500 million for his company's initial foray abroad.

Renewable power sources currently make up 38% of Aboitiz Power's total portfolio. Erramon intends to maintain that ratio, even though the company is pursuing renewable projects, such as geothermal, abroad.

In the domestic market, the company is keen to acquire existing assets, given the risk of a power supply glut in the next three to four years. In October, it won a bid to buy Blackstone Group's coal power assets for $1.2 billion in one of the biggest deals in the Philippine power sector. The transaction, once approved by antitrust regulators, will give the company 665MW in new capacity. This will come on top of the 287MW in additional capacity to be commissioned next year from existing projects.

The 60-year-old Erramon is a member of the fourth generation of the Aboitiz clan to do business in the Philippines. His family traces its roots from the Basque region in southern France and northern Spain, the Philippines' colonial master for over 300 years. 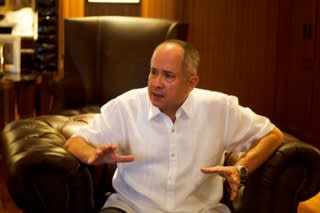 Erramon Aboitiz, who has deferred his retirement to 2019 from 2016, is the group's sixth chief executive. (Photo by Lester Babiera)

Centuries of suppression led many Basques -- an indigenous minority ethnic group -- to seek new lives abroad. Access to the ocean saw many emigrate to the Americas, but some headed east and eventually reached the Philippines.

Navigator Miguel Lopez de Legazpi and missionary Andres de Urdaneta led the initial group of Basques that landed on Philippine soil in 1565. Lopez de Legazpi eventually became the first governor general of the Philippines, and many Basques later played an instrumental role in the Christianization and industrialization of the Philippines. The Ayala family of Ayala Corp., Philippines' oldest conglomerate, founded in 1834, also hails from the Basque region.

Author and diplomat Marciano de Borja points out that Basque activity and interests in the Southeast Asian archipelago were intertwined with the policy of the Spanish monarchy, which benefited entrepreneurs of Basque descent.

Aboitiz Group was founded by Paulino Aboitiz, who arrived in the Philippines in 1870s and started trading hemp in Leyte island, east of Cebu. Partnerships forged by Paulino, along with strategic marriages, produced a business group that would do business from Cebu for over a century, until it moved to Manila in 2013.

Erramon was born to Enrique Aboitiz, who chaired the privately held family holding company Aboitiz & Co., and Ma. Lourdes Mendieta, also of Basque descent. He studied business administration in Gonzaga University in Washington. Many of his six siblings are also active in family businesses: Enrique is the chairman of Aboitiz Power; Xavier is the head of human resources at listed holding company Aboitiz Equity Ventures; Sabin is AEV's chief operating officer and head of food unit Pilmico; and Andoni heads Aboitiz Land.

Erramon, who goes by the Basque name "Montxu" in the local business community, is familiar with his Basque heritage, although he does not speak the language.

"The Basques are very industrious, and they are very hardworking," he told AFP in 2010. "In fact, if you even go to Spain, ... a lot of industries are actually in the Basque areas."

Erramon, unlike many business elites, learned the trade on the ground. Among his earliest jobs in the group, he recounted in an interview with Forbes, was collecting overdue payments for Davao Light & Power Co. during a tumultuous time in the southern city of Davao.

Davao, the hometown of current President Rodrigo Duterte, was devastated by fighting between communist guerrillas and anti-communist vigilantes in the 1980s. "Our receivables went to hell. People were not paying us. Hotels were empty. They could not afford to pay us," Erramon told Forbes.

It took him two years to make any significant progress in his task, which he did by offering customers repayment options rather than cutting off their power.

Erramon's experience encouraged the Aboitiz family to expand further in the local electricity business. Anticipating the liberalization of the Philippine power sector, which finally happened in 2001, the group incorporated Aboitiz Power in 1998, with Erramon as CEO.

But transforming Aboitiz Power from a power distributor into a power generator proved a serious challenge. First was the struggle for capital in the wake of the Asian financial crisis in 1997. "Even a project of $150 million, you could not do it without a foreign funding and without a foreign partner. It was too big. The banks would not finance you," Erramon recalled. This prompted him to bring in foreign partners, such Australia's Pacific Hydro. Later, Aboitiz Power collaborated with Norway's Statkraft Norfund Power and Japan's Team Energy, a joint venture of Tokyo Electric and Marubeni, among others.

Another challenge came in the mid-2000s. Erramon had to persuade power distributors to forge long-term supply contracts with Aboitiz Power, even though it had yet to build any plants.

He was successful in these tough negotiations, thanks largely to the established credibility of the Aboitiz group. "We carry on Don Ramon's legacy of integrity in its highest form, always safeguarding our reputation, what we consider our most valuable asset," he said in 2015. Company history has it that Ramon, Erramon's grandfather, rescued the company after the World War I by patiently paying down ballooning debts instead of dodging those obligations by filing for bankruptcy.

In 2007, Erramon and his team led Aboitiz Power's initial public offering, which raised $230 million pesos, adding to its war chest for acquisitions.

"We considered the privatization process (of the power sector) as a once-in-a-lifetime opportunity for the Aboitiz group, so we concentrated our efforts in this area," he said in his speech in 2011 after being hailed as the "Management Man of the Year" by the Management Association in the Philippines.

Aboitiz Power's 2,500MW generating capacity represents around 15% of the country's total capacity and is up significantly from the 167MW it had before the IPO. The company's net income surged to 17.6 billion pesos ($351 million) in 2015 from 1.9 billion pesos in 2006. The market has responded favorably. Aboitiz Power's shares traded at 42.90 pesos on Nov. 25, compared to 5.8 pesos during its first day of trading in 2007.

Erramon has turned Aboitiz Power into a strong pillar for the listed holding company, AEV, which now derives over 70% of its earnings from the power company. The remainder comes from banking, real estate, food and cement. 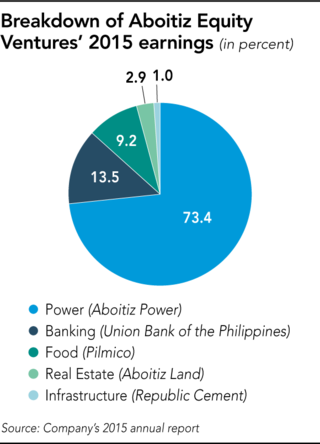 In 2009, Erramon became CEO of AEV and has since become an important figure in the group. He pushed to make infrastructure the "fifth leg" of the company in hopes of capitalizing on the government's pledge to ramp up infrastructure development, partly through privatization -- a process Erramon knows well.

Erramon is in the homestretch of his career. He was supposed to retire by end of this year, but AEV board members decided in 2014 that he was irreplaceable at the moment. He will thus be serving as CEO until 2019 "to ensure a smoother transition of leadership and the continued execution of the group's long-term strategic plans," the company said in 2014.

But while Erramon is tasked with leading the group's expansion into infrastructure and making inroads into Southeast Asia, he also faces the challenge of facilitating a smooth succession.

The transition, he said, will be carried out carefully and professionally. "We take succession in general very, very seriously. We have a committee that reviews succession twice a year to make sure that we get people who are able to take on the roles."

In the process of succession, strict family rules handed down through the generations will come into play for the clan's 500 or so members. According to local reports, the principle of meritocracy applies to all family members as well as to outside professionals.

In 2010, Erramon said the company will be flexible, but it will remain under the control of family members. "We are a family consortium of cousins," he told AFP.

During his interview with the Nikkei Asian Review, Erramon suggested that this attitude has not changed.

"We also believe that the role of family, of being leaders, of being the example, of being the inspiration, is very, very important. So our expectations of family is more than nonfamily," he said.

Erramon himself was promoted based on merit. As the company chooses its next leader, it will almost certainly look to the Basque lineage of the Aboitiz family that has provided the group with both longevity and integrity.