TOKYO -- The World Economic Forum's latest global competitiveness list shows a positive picture in Asia, with the Philippines and India moving up the ranks.

The Global Competitiveness Report 2018, published on Wednesday, showed the Philippines rising 12 rungs from last year to 56th of a total of 140 countries and regions, based on a new methodology applied to both years. India also rose five places to 58th, making the largest gain among G-20 economies.

WEF used a new methodology in its latest edition to include elements that determine productivity. Of the 98 indicators, 34 were retained from the previous methodology while the other 64 indicators are new, resulting in new updated list for 2017.

Economic growth in the Philippines exceeded 6%, along with China, Cambodia and two other countries in Southeast Asia. The WEF also noted that the country's safety improved over the year, with scores in indicators including organized crime, homicide rate and incidence of corruption rising. It ranked 21st in social capital.

The country's infrastructure such as airport and shipping connectivity improved as well. On the other hand, the Philippines still needs to enhance education, its product market as well as its workforce, the report shows. 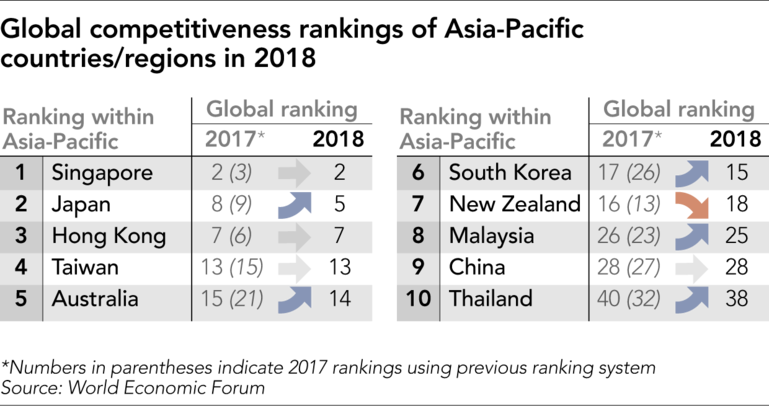 The ease of doing business in India has also improved. The cost of starting a business has come down and time to start a business has shortened over the year. The report expects further improvements in India's health sector which ranks 108th and skills sector which stands at 96th.

Singapore topped the Asian chart and was second globally behind the U.S. The report says the "openness [of the city-state] is the defining feature of this global trading hub and one of the main drivers of its economic success." Its infrastructure, health and product markets also topped the ranks.

Japan rose three places to 5th. It is the most improved of the top 10 countries and regions, ranking first in health, digital and physical infrastructures. Japan is one of the region's key innovation hubs along with South Korea and Taiwan. However, the report said they "could improve on the so-called 'softer' drivers of innovation to attain the level of 'super innovators,'" such as Germany, the U.S. and Switzerland, as Japan scores fairly low on risk aversion, meaning not taking enough risks, and critical thinking. Japan has also room to improve its levels of social capital and corporate governance.

China kept its ranking at 28th, Hong Kong came in 7th overall and third in Asia. It is comparable to Singapore but the report noted that it scored "slightly less well in terms of innovation and labor market efficiency." Its sea port infrastructure and connectivity ranked first, while ICT adoption and financial system had high scores as well.

Taiwan also remained in the same ranks at 13th, while its macroeconomic stability scored it at 100. Its innovation capability was at 4th place, with abundant international co-inventions and cluster development.

South Korea rose up to 15th place, up two rungs compared with the 2017 edition, thanks to its leading position in ICT adoption. Its R & D expenditure is the second highest after Israel, at the equivalent of 4.2% of its gross domestic product. The report suggests the country can improve in entrepreneurial risk-taking and employee empowerment.

Malaysia, Thailand and Indonesia all rose in their ranks but Vietnam fell three places to 77th.