HAMBURG -- Poland is in talks with the Philippines to bring in more Filipino workers to fill a labor shortage even as Warsaw continues to resist refugees and migrants from the Middle East and North Africa.

The Czech Republic and Germany are also trying to attract workers from the Philippines and other Asian countries to fill local positions, as their labor markets face aging populations, a brain drain and lower birthrates. Analysts say that Slovakia, Hungary and Romania will also be forced to open their doors to Asian workers as their labor supply from traditional sources such as Ukraine and Serbia dries up due to emigration.

But the Polish move has raised eyebrows within the European Union, of which it is a member. The Polish government has fought Brussels' plans to make bloc members accept more refugees and migrants that have arrived at the continent, having traveled over the Mediterranean Sea and through the Balkan corridors.

But Poland's right-wing government, led by the Law and Justice Party also known as PiS, has cited security concerns about Muslim refugees and migrants, with Prime Minister Mateusz Morawiecki earlier this year declaring: "We will not be allowing migrants from the Middle East and Northern Africa to enter Poland."

Yet, some analysts estimate that Poland will face a shortage of four million workers by 2030. As such, the government is particularly keen to attract Filipino workers to its IT, construction and medical sectors, including caregivers for the elderly.

"The Deputy Labor Minister [Stanislaw] Szwed has approached us, and in early August we responded with a draft agreement stipulating the protection mechanisms we expect for Filipino workers, which will hopefully be signed during the remainder of this year," said Patricia Ann V. Paez, Philippine ambassador to Poland, in a recent interview with the Nikkei Asian Review.

Paez said the Philippines expects its workers to be treated the same way as their Polish counterparts, including in social security and health insurance. Paez said that the withholding of the Filipinos' passports by employers will not be accepted -- a practice widely used in Asia on domestic helpers.

But significant bureaucratic hurdles remain, as the newly opened Polish embassy in Manila is still lacking a consulate section. This means that Filipinos need to apply for their visas in Kuala Lumpur, Malaysia.

Nonetheless, Paez said: "Poland will be an attractive destination for our workers due to its strong labor rights, the shared Catholic faith and strong family values, the only possible drawback being the cold weather."

With the exception of a sizable Vietnamese community that mostly arrived as guest workers before the collapse of the Soviet Union, there are few Asians living in Eastern Europe -- only around 50,000 in Poland, Hungary, Slovakia and the Czech Republic in total.

The Czech Republic has the lowest unemployment rate in the EU of 3.1% and is facing a shortfall of 310,000 workers. To this end, the government loosened immigration rules for Filipino and Mongolian workers in January. It will now take Filipinos just three months from the time of job application to landing in the Czech Republic, half the time it used to take. The initial annual quota is 1,000 workers from each Asian country.

From Mongolia, the Czech Republic is hoping to draw in workers in the meat-processing and dairy industries. Both countries signed an agreement in November to train Mongolian workers in those sectors.

Vladan Raz, a Czech recruiter with Manila-based EDI Staffbuilders International, said that he is looking to employ Filipinos for local e-commerce platform Alza for a variety of logistics positions. He is also preparing to recruit Filipinos for Czech Airlines Technics and German wholesaler Metro Cash & Carry. 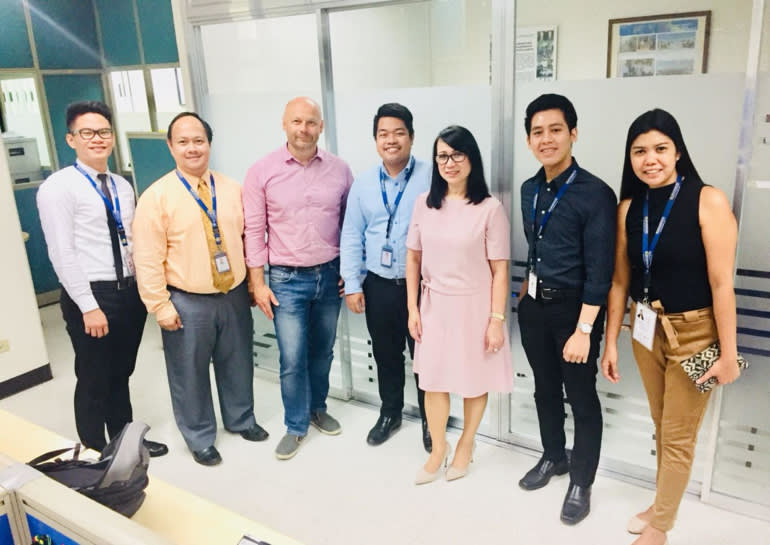 Vladan Raz, third from left, and his colleagues in Mania have been recruiting Filipino workers for facilities located in Czech.

Raz said that strict regulatory oversight by the Philippine government makes it easy for him to bring in Filipino staff.

"The Philippine government's really good regulatory system for its overseas workforce effectively rules out the Filipinos becoming illegal migrants here, which is a very important aspect in the current political climate in Central Europe," he added.

In Germany, the "Triple Win Project" agreed between both countries in 2013 is also coming to fruition, with one of the major hospital operators, Asklepios, welcoming its first six Filipino intensive care and surgery nurses in July, and another 253 to follow in the coming months. It took two years of training in the Philippines, including in the German language, before the nurses were able to move to Germany, highlighting the complexities involved in the program.

Romania, too, has been keen to bring in foreign workers. It has been focusing on Vietnam, and the government approved 1,400 new work permits in 2017, up more than sixfold from the previous year.

Daniela Zampini, an employment specialist for Central and Eastern Europe at the International Labor Organization, said that acute labor shortages in some industries may push the private sector to challenge some governments' anti-immigration stance.

Zampini pointed to Hungary as an example. Construction wages there have been growing at double-digits year-on-year, pushing industry associations to pressure the government to open the door to more Asians to keep costs low. But Hungary's Prime Minister Viktor Orban is among the most vocal leaders in the EU and he has risen to power on populist, anti-immigration policies. How long he can hold out remains to be seen, analysts said.

From the point of view of Asians, substantially higher wages in Europe is a big draw. For example, Germany's Triple Win Project promises starting monthly gross salary of 1,900 euros ($2,150) for nurses. That is nearly four times more than what medical doctors earn in the Philippines, according to the country's most recent wage survey at current exchange rates.