Woes are causing unrest, which are spilling over into the political world 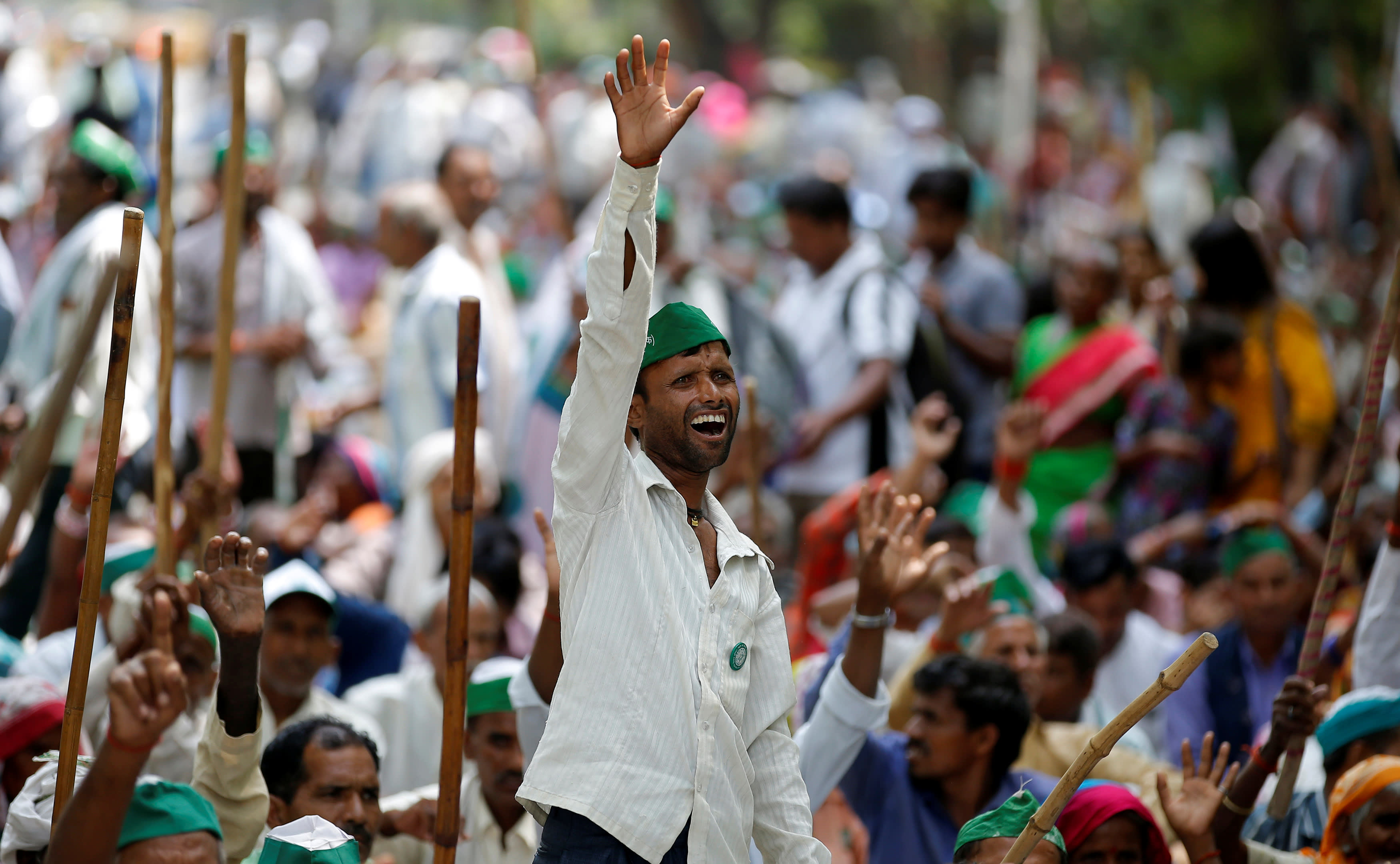 A man reacts during a protest in New Delhi on June 15 against the killing of six farmers during clashes in the central state of Madhya Pradesh.
August 3, 2017 10:00 JST | India
CopyCopied

Higher farm output -- helped by steadily increasing productivity and favorable monsoon weather after two consecutive drought-afflicted years -- should be making food producers happy. But Indian farmers are a dissatisfied bunch, and they're increasingly taking to the streets to vent their anger.

Their problems are compounded by a series of market-distorting government policies such as restrictions on exports even when there is a domestic supply glut, the imposition of stockholding limits, intended to stop hoarding, and a ban on futures trading, which limits hedging options. All these policies have exerted downward pressure on agricultural prices.

Successive governments have relied on such measures to keep food prices low and to suppress headline inflation. If that weren't enough, the sudden withdrawal of high-denomination bank notes in November squeezed the lifeblood out of India's rural economy, which deals mostly in cash.

Without cash in circulation, demand tumbled and prices of major agricultural commodities were pushed well below minimum support levels -- the prices at which government agencies will buy farmers' output of some commodities. This is despite a promise by Prime Minister Narendra Modi's Bharatiya Janata Party government that farmers' incomes would double by 2022.

A combination of lower produce prices, a steady rise in the cost of inputs (seeds, fertilizers and labor) and inefficient production methods have made farming financially unviable and led to rising indebtedness. Total outstanding farm loans ballooned to 12.6 trillion rupees ($196 billion) at the end of September 2016, up 57% from 8 trillion rupees in March 2014.

In part, this explains growing protests by farmers in many parts of India -- from Tamil Nadu in the south to Punjab in the north, Madhya Pradesh in the center and Maharashtra in the west. These farmers are seeking urgent relief of bank debt and more effective price protection for their produce.

Since farmers represent substantial blocs of votes in most Indian states, the BJP has found it hard to ignore their cries for help. The Uttar Pradesh and Maharashtra state governments -- both led by the ruling party -- have succumbed to pressure to offer loan waivers to farmers, and there will be increasing demand for such relief measures in other states.

If they continue to bow to farmers' demands, state governments will have to fork out vast sums to help pay down debt. But if state governments reject these requests the unrest will intensify. Some protests have already turned violent, and clashes with police have resulted in the deaths of six farmers.

SHORT-TERM GAINS Loan waivers are at best a temporary relief measure, and price protection comes with many side effects -- including rising government costs. And indebtedness is just one problem that farmers face. Other issues have squeezed farmers' incomes -- among them low productivity for most crops, dependence on unpredictable monsoon rains, wastage in horticultural products, and poor regulation during periods of food inflation. India's farm sector needs urgent policy attention if its problems are to be resolved on a sustainable basis.

Official statistics show that food grains production, including cereals and pulses, rose to an all-time high of 273.38 million tons in 2016-2017. This has created an overhang of stocks from the last harvest. Forecasts for a normal monsoon in the June to September period suggest that India will continue to produce more than it consumes. Added to that, the strength of the rupee and low global prices are putting further downward pressure on domestic agricultural prices.

Perishable horticultural products now account for a third of agricultural gross domestic product. A lack of post-harvest infrastructure, especially cold-chain storage, and the absence of an effective government procurement mechanism make farmers producing these items vulnerable to market volatility. Excess supply has pushed prices to such low levels that some growers are throwing out their produce.

Continued imports of pulses -- even when prices are down -- have added to farmers' woes. The government has not been quick enough to react to market movements. An export ban was introduced in 2006, when prices of pulses were rising, but the restriction has not been removed in spite of rising output. Only lentils and a variety of gram flour (made from ground chickpeas) can be exported. India has been equally slow to react in the pigeon pea market, imposing a 10% import duty only in late March.

Furthermore, uncertainties created by the implementation of a goods and services tax led traders to offload stocks ahead of the July 1 start date. Most raw farm produce will not be taxed, but so-called "branded" goods will face a 5% GST, and processed food items will attract a tax of 5-18%. Confusion about the different rates, and the paperwork involved, encouraged traders to offload stocks so they could start afresh in July.

Arresting the slide in farm produce prices is one way to ease problems in the sector, but raising import duties and relaxing export bans will not be enough. India must also educate farmers about how much to produce.

SUSTAINABLE SOLUTION Raising minimum support prices does not work, except for wheat and rice, which are purchased only by the federal government. MSPs for other crops amount to empty promises, since they are not backed by effective procurement support. Nonetheless, farmers have bought those promises and as a result have over-produced. The long-term solution to India's farm sector mess is to raise productivity, which has been increasing but is still below optimal levels for most crops.

Fixing this problem would allow the farm sector to maintain financial viability even at low prices, but it would require determined action in three areas: providing extensive irrigation infrastructure to reduce dependence on monsoon rains; freeing up the leasing of farmland, so that smallholdings can be consolidated into larger ones by investors who can make long-term investments; and implementing a new approach to the use of fertilizers. Urea, a chemical fertilizer whose price is controlled, is overused because it is cheaper than non-urea fertilizers such as phosphates. Such unbalanced fertilizer use is not good for soil health and productivity.

Ministers also need to relax restrictions on futures trading and exports. Deepening futures trading in agricultural commodities would help both buyers and sellers to hedge risks and would set prices in advance, allowing all parties to manage their books more efficiently.

Similarly, greater freedom in agricultural trading for major retailers would lead to more competition and improve post-harvest distribution and sales infrastructure, helping to develop cold chains and encouraging the processing of produce with less waste. All these things would help to limit price fluctuations.

The expansion of comprehensive crop insurance would provide income protection from losses arising from crop failures as a result of natural disasters, which sometimes drive farmers into indebtedness. Animal husbandry should be promoted to reduce farmers' dependency on crops and to provide a supplementary source of income.

Such a program would call for gutsy leadership from New Delhi, and for state capitals to take on local vested interests opposed to these sensible and much-needed reforms.

Prerna Sharma is vice president and head of agriculture, food and retail at Biznomics Consulting, a research and policy advocacy specialist in Mumbai.