Much of the world is now waking up to the idea that economic growth can be decoupled from emissions growth.

With China, Japan and India leading the way, the Group of 20 leading industrialized countries is now decarbonizing at 2.8% a year. This is the highest rate since 2000 and more than double the 1.3% average of the last 15 years. However, to keep the global average temperature rise this century below 2 C, as stipulated under the 2016 United Nations-led Paris Agreement on climate change, an annual reduction in global carbon intensity of 6.5% is now required.

The private sector holds the key to this low-carbon future, with the Paris deal effectively acting as a global business plan for decarbonization. The accord was built on an understanding of the economic advantages of reducing the risk and impact of climate change. Offering speed and efficiency, the private sector is essential to creating the change we need to drive this plan forward.

Between 2008 and 2013, the global price of photovoltaic panels dropped by 80% as the Chinese solar industry gained strength. This fundamentally changed the economics of solar power worldwide.

Clean energy from solar, wind and hydroelectric sources is now becoming even more viable as advances in renewable energy generation come together with new distribution models based on smart metering and smart grids. At the same time, smart grids have enabled feed-in tariff frameworks in Australia and South Korea that encourage households to install solar panels by repaying them for energy they generate and store in the grid.

Technical breakthroughs in water reuse and supply technologies, regenerative-drive elevators, geothermal heat pumps and other building systems, along with new generations of building materials, are further reducing the cost of constructing and maintaining sustainable buildings.

Beijing's World Financial Center was the first project in China to earn a platinum rating for Leadership in Energy and Environmental Design, a certification scale developed by the U.S. Green Building Council, with a multitude of measures to improve indoor air quality for its tenants in what has become known as the "city of smog." Designed as a landmark in the Chinese capital's central business district, it is a hub for global financial firms.

We are also seeing exciting developments in urban design that make streets, parks and other public spaces naturally cooler. In Singapore, solar-powered "super trees" in the Gardens by the Bay development have operated as temperature moderators for the surrounding downtown area. In 2022, the soccer World Cup in Qatar will be staged in open-air stadiums that use solar power and solar cooling to ensure the comfort and safety of spectators and athletes during the country's hot and sunny summer months.

China has been the second-largest market in the world for green building activity in terms of Leadership in Energy and Environmental Design-registered and certified projects. As of March, there were 1,013 LEED commercial projects in mainland China.

Green buildings offer developers a faster return on investment through reduced operating and maintenance costs. According to a study by the Hong Kong Green Building Council, the cost saving for existing buildings after a major retrofit can be as high as 45% due to more efficient mechanisms including ventilation and lighting systems, electrical installations and elevators.

Market demand stems also from the public sector, with the Chinese central government making a strong push for public buildings to adopt its own "3-Star Rating System," or Green Building Evaluation Label, alongside LEED. As of 2016, over 4,500 building projects in China had been assessed for the green label, helping to raise green building standards across the nation.

Alongside technology developments and market forces, environmental regulations are an increasingly important driver of green building in Asia, especially in India and Singapore. Voluntary standards have previously been the norm, but mandatory standards will likely provide the impetus for future innovation as governments seek to provide the policy and contexts for businesses to lead green building growth.

In recent years, Asian countries such as Japan, South Korea and India have introduced net-zero energy building policies to curb energy use and emissions. While China does not yet have a mandatory net-zero energy building policy, its central government has a strong energy efficiency program, including regulations on emissions and energy conservation.

Across Asia, much green building is still initiated by governments, but steps are being taken to help corporations find value in green investment. For example, China issued $36.9 billion worth of green bonds in 2016, meaning it now dominates the global market for climate-friendly infrastructure investment. With active government support, China's green bond market is successfully mobilizing private capital to finance projects that help reduce carbon emissions and mitigate the effects of climate change.

Cooperation between government and business now needs to accelerate to bring the Paris Agreement to life. At the 2017 World Sustainable Built Environment Conference in Hong Kong in early June, global business leaders, policymakers, academics and investors will come together to exchange ideas on how to mobilize and support the business community to take action on climate change.

The world is moving irrevocably toward a low-carbon global economy, creating a vast global marketplace for green buildings, clean energy and smart cities that is now waiting to be unlocked. A combination of technology advances, market demand and regulatory change make this the ideal time for business leaders to step up and take advantage of the opportunities inherent in a greener future. 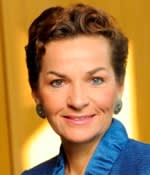 Christiana Figueres is vice chair of the Global Covenant of Mayors and convenor of Mission2020, a climate change initiative. She was previously executive secretary of the U.N. Framework Convention on Climate Change.