Final cabinet approval of the budget was given Friday morning.

The defense budget of 5.19 trillion yen ($46 billion) is a record high, surpassing last year's 5.12 trillion yen. This will push defense spending to over 5% of the entire 97.7 trillion yen budget -- itself an all-time high.

Discussions about the budget typically revolve around social security, owing to its prominence. This year, however, the danger posed by North Korea has people paying close attention to defense spending.

This will be the sixth consecutive year that the defense budget has risen, with the amounts sharply increasing since Abe took office in 2012. But rather than a reflection of the prime minister's desire to revise Japan's pacifist, war renouncing constitution, the increase is more in response to mounting military tensions in East Asia, chief among them North Korea's increasingly provocative behavior. The rogue state has test-launched 16 missiles this year into the Sea of Japan and the Pacific Ocean. On Monday, in what could be a warning of another launch, North Korea's state-controlled media published an editorial claiming that it is any country's rights to explore space.

Japan's defense budget for next year focuses on expanding its missile defenses, including initial planning costs for deploying two Aegis Ashore land-based missile systems from the U.S. "There is a need to strengthen our capability to regularly and sustainably defend the entire country [quickly] as North Korea grows its ballistic missile capability," said Defense Minister Itsunori Onodera about the spending, which was originally scheduled for April 2019.

The budget is also in response to China's growing military presence, not only in the South China Sea, but worldwide. Japan has been conducting joint exercises with the U.S., India, the Philippines and Australia in order to counter threats in the region.

In the face of these growing uncertainties, Tokyo wants more military muscle. Already the government is set to purchase Norway's Joint Strike Missile anti-ship cruise missile, and wants to purchase fighter jets as well as construct two more patrol ships and a submarine.

The defense budget is expected to continue to swell over the next few years as the Aegis system begins to be deployed. During his visit to Japan, U.S. President Donald Trump urged Abe to buy U.S. military equipment to help balance the trade deficit between the two countries. The Aegis purchase could be a result of negotiations between the two leaders. 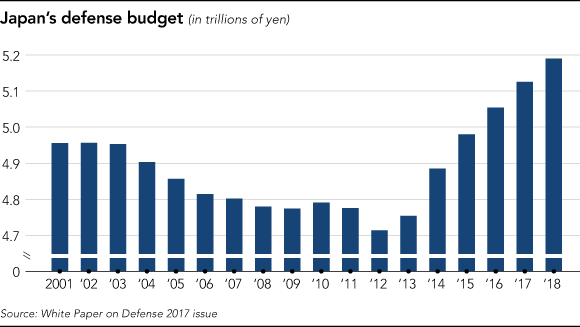 Further provocations by Pyongyang could prompt Abe to expand the country's Self-Defense Force, a move that would likely keep the indebted and aging nation from restoring its primary balance surplus. But delayed fiscal consolidation may lead to a downgrade of government bonds.

Standard & Poors rates Japanese government bonds as A+, the same as China, Slovakia, or Ireland.

The Bank of Japan currently holds a firm grip on the yield curve, but lower ratings may push up interest rates when the easy-money policy ends. This could further distance Japan's finances from consolidation due to higher interest expenditures.

Some observers argue that Japan's defense budget is not large compared to its economy. According to the Stockholm International Peace Research Institute, Japan was eighth in the amount of military spending behind the U.S., China, Russia, Saudi Arabia, India and others.

Other than defense, the government will spend 32.9 trillion yen on social security, which also is at a historical high. As much as a third of this year's budget is earmarked for ballooning pension payments and medical expenses incurred by a graying population. The government will also spend more on combating the falling birthrate. Public works expenditures will see a marginal increase to 5.97 trillion yen.

Assuming the economy grows 1.8%, the government expects tax revenue of 59 trillion yen, the highest in 27 years. Higher dividends from corporate share holdings -- driven largely by strong earnings growth as the economy continues to recover -- will increase revenue from income tax.

The government plans to issue 33.6 trillion yen worth of government bond, the eighth consecutive year issuance has decreased. Although debt dependence has slackened, the country will still carry a primary balance deficit of 10.39 trillion yen.