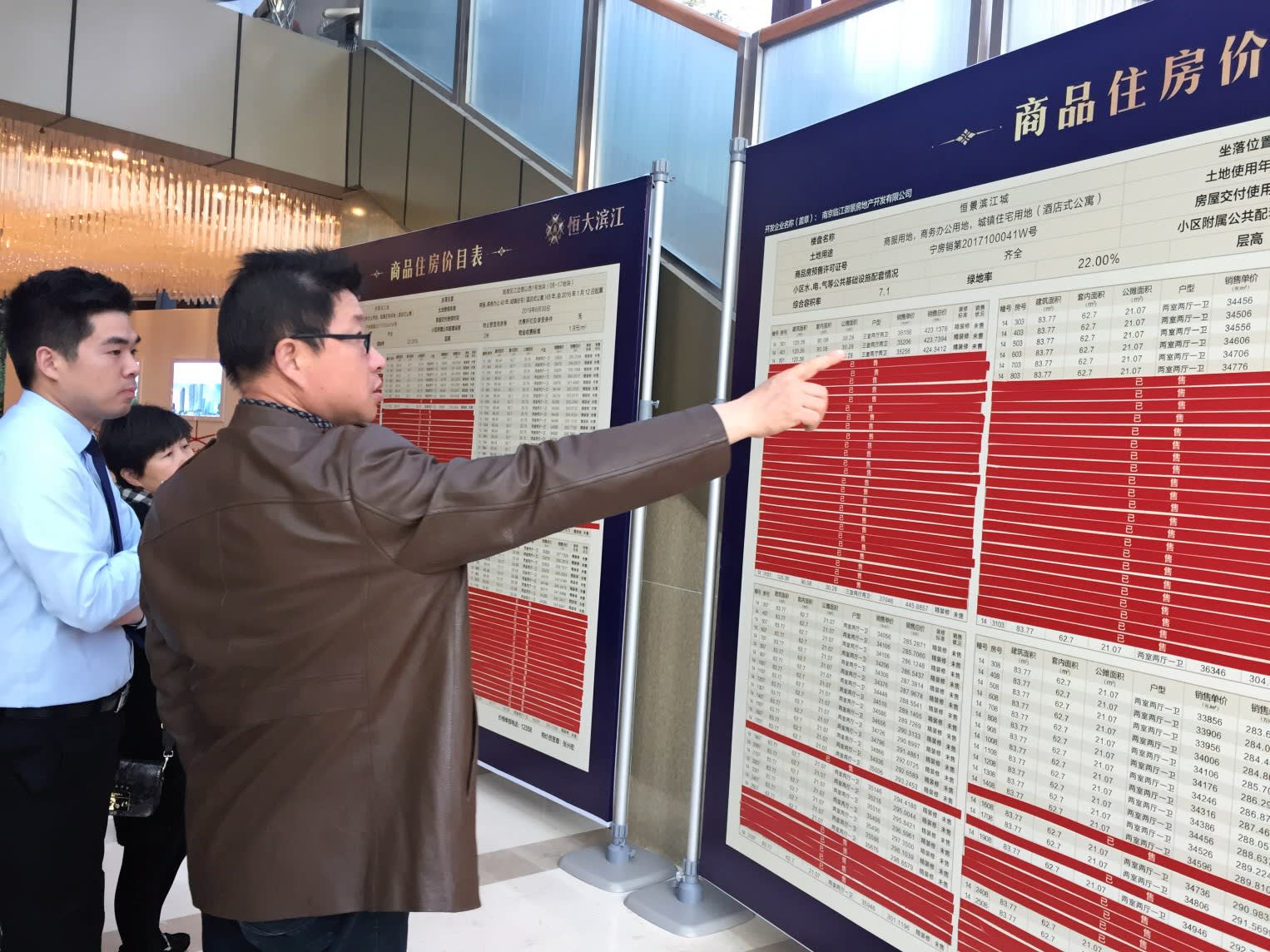 A real estate showroom in Nanjing, where prices on new residential buildings have begun to fall.

SHANGHAI/BEIJING -- Mortgage rates are on the rise across China as authorities strengthen safeguards against a property bubble and seem to be curbing runaway prices in some of the country's hottest markets.

State-owned banks, including the Bank of China and Agricultural Bank of China, in mid-August raised interest rates on home loans for the city of Guangzhou by 5%, charging 5.145% annually on loans of five years or longer. Previously, borrowers paid 4.9% -- the People's Bank of China's benchmark lending rate for loans of that term.

In the eastern city of Zhengzhou, certain banks have tacked a 10% premium on the central bank's reference rate, charging 5.39% interest. Rates in the cities of Nanjing, Hangzhou and Wuhan average around 5%.

A recent survey of more than 500 bank branches by the financial information provider Rong360 showed that more than 20% of banks now charge more than the central bank's benchmark rate. A little under 70% reported charging that rate, while fewer than 10% offer discounts.

The PBOC's reference rate has remained unchanged since October 2015. But until the end of 2016, the majority of mortgages were issued at a discount on the official benchmark. Many banks scaled back those discounts at the beginning of this year, effectively raising rates 0.5 percentage point, and began charging even higher interest on loans for second or additional homes. At the same time, "more people are failing banks' borrower screenings," a real estate broker in Beijing said.

Authorities' eagerness to curb skyrocketing real estate prices seems to be behind these rising rates. Regional governments across China began last year tightening restrictions on home purchases, for example requiring would-be buyers to pay taxes and social insurance premiums in a locale for a certain amount of time before purchasing property there. But these rules failed to root out real estate speculation entirely, and prices continued to surge in major cities such as Beijing and Shanghai at a clip some feared pointed to an inflating bubble.

Raising interest rates aims to make buying more expensive, hitting speculators where it hurts: on the profit margin. The increases also reflect higher funding costs for banks amid a rise in market interest rates in the first half of this year.

Slowly but surely, these increases are showing the intended effect. Of the 70 major cities for which China's statistics bureau gathers monthly data, sales prices on new residential buildings rose in July in 56 -- four fewer than in June. Prices remained level in five, compared to four in the previous month, and fell in nine, compared to six in June.

The nine where prices dropped include Beijing, Nanjing, Zhengzhou, Tianjin, Chengdu, Fuzhou and Shenzhen -- all cities where authorities are particularly on guard against property bubbles. The combination of purchase restrictions and pricey mortgages seems to have deterred enough buyers to curb the market's runaway climb. The total floor space of real estate sold in July was just 2% higher than in the previous month, compared to 21% growth for June.

Yet not all buyers face the same barriers when borrowing becomes more expensive. Using mortgage rates as a means to rein in prices "exacerbates inequality between the rich, who can pay all cash, and middle-class buyers who cannot purchase property without financing," a government economist pointed out. Many are now arguing for a supply-side approach to controlling prices -- one that could involve convincing regional governments, which have restricted the supply of residential land in major cities for fear of collapsing property prices, to allow more housing construction for those who demand it.