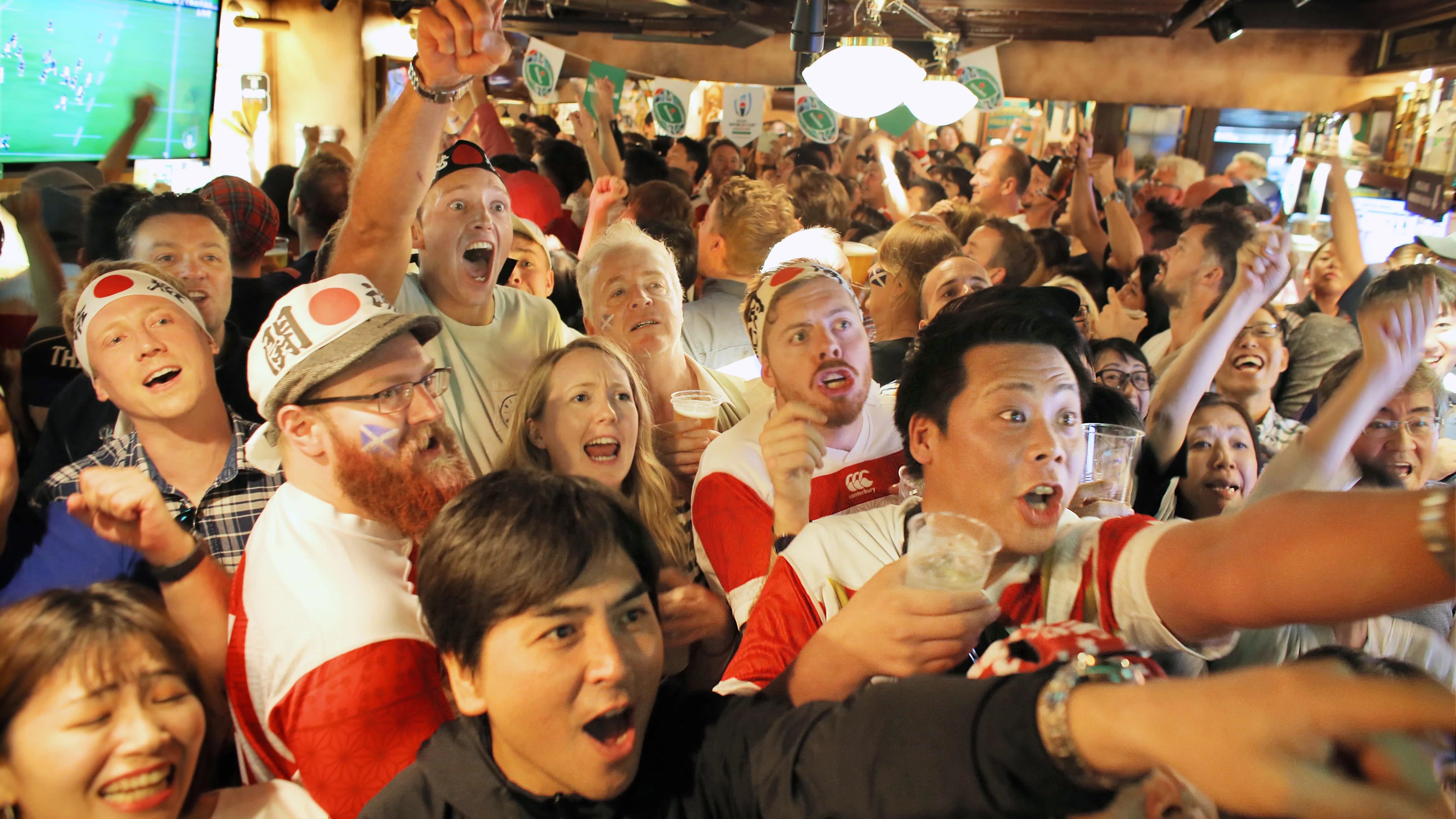 Tourists in Japan for the Rugby World Cup spent more on food and alcohol than other visitors. (Photo by Makoto Okada)

TOKYO -- This year's Rugby World Cup drew tens of thousands of fans to Japan from such areas as Europe, the U.S. and Australia, an ideal outcome for a country that needs more visitors from beyond its Asian neighbors to achieve its tourism ambitions.

Roughly 50,000 more tourists came from the U.K. in September and October compared with a year earlier, government data shows. Visitors from Ireland, Australia, New Zealand and France jumped by more than 10,000 each, while American tourists rose by about 30,000.

Accommodations, food, transportation, match tickets and alcohol accounted for nearly 90% of spending among World Cup attendees. Matches for each team were scheduled a week apart to give players a chance to rest, leaving spectators with plenty of free time to sightsee and sample local cuisine. By comparison, tourists from China spend about half their money on shopping.

A representative from the tourism association of Oita Prefecture -- which hosted matches featuring such traditional rugby powerhouses as England, New Zealand and Australia -- visited industry meetings in those countries recently in hopes of leveraging new connections from the World Cup.

The prefecture normally draws more than half its foreign visitors from South Korea. But a recent diplomatic row between Tokyo and Seoul has sent their numbers plummeting, spurring a scramble to market Oita's hot springs and other attractions to new audiences.

Visitors to Japan surged fivefold over the seven years through 2018, yet most still come from close by. Three-quarters of 2018's 31.19 million visitors hailed from mainland China, South Korea, Taiwan and Hong Kong.

The risks of this lack of diversity became clear this year, when the Japan-South Korea spat led to a roughly 65% year-on-year plunge in tourists from the country in October and November. And while traffic from China is still growing, spending among a group once known for "explosive buying" seems to have plateaued.

Tourists also tend to congregate in a small subset of areas, particularly the Tokyo and Osaka regions. Overcrowding is causing problems for residents of such hot spots as Kyoto, the Asakusa district of Tokyo and the city of Kamakura.

The Japanese government aims to draw 60 million visitors a year by 2030, with the help of such events as next year's Summer Olympics in Tokyo and the 2025 World Expo in Osaka. While these two events will not be as widely dispersed across Japan as the Rugby World Cup was, they can attract a more diverse range of visitors, which will be essential to keeping up the momentum of recent years.