With stimulus money yet to arrive, unskilled workers struggle to find work SHANGHAI -- As early as 5 a.m., men on electric bikes begin to arrive at a street in the western outskirts of the Jiangsu Province city of Xuzhou, a gathering point for day laborers. By shortly after 6 a.m., their ranks have swelled into the hundreds.

Brokers rattle off the jobs on offer -- "interior construction, 200 yuan ($28) a day, up to three days," one says. Once a broker and laborer agree on terms, the worker heads directly to the job site.

Among those seeking work is a 59-year-old Zhao Xiping, who has had next to no luck finding employment lately. The coronavirus pandemic has reduced demand for day laborers, and those that are hiring want strong, healthy young people.

Zhao, born in a poor farming village, can write only the Chinese characters in his name. This "is the only work I can take," he laments while eating a 1-yuan scallion pancake. It is after 11 a.m., and the site is nearly deserted.

China reported a 6% unemployment rate in April, 1 percentage point higher than a year earlier. But the official survey looks only at urban areas, and so it misses the laborers who have returned to their rural villages after failing to find work. Nearly 20 million such workers remain in their hometowns, by one estimate. 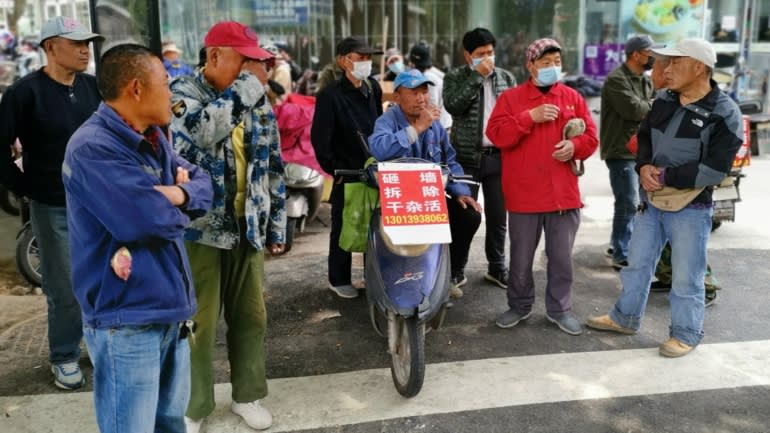 Day laborers await work on street in the outskirts of Xuzhou in China's Jiangsu Province. (Photo by Yusho Cho)

Zhao Yuanhao who teaches at a university in the central city of Luoyang frequently travels to Luanchuan County, two hours away by car. The professor is drawing on his experience running an e-commerce business to help residents sell specialty products such as mushrooms online, in a place that was until last year on the government's list of "impoverished" areas.

His results have been mixed. In a village where annual disposable income averages 13,000 yuan per person, only a handful of households have computers, and it is difficult to market effectively with just a cheap smartphone.

"These are people whose only work experience is with farming," Zhao said. He is pressed for time: Migrant workers will be returning soon, and the town cannot escape poverty without money coming in.

President Xi Jinping's government recently approved a roughly $500 billion stimulus package. With the National People's Congress having just convened in late May after a two-month delay due to the coronavirus, it will take some time for aid to reach rural areas.

Yet some are already positioning themselves to cash in on a hoped-for windfall.

A high-pitched clanging sound rings out from a steelworks in the city of Changzhou, about four hours away from Xuzhou. Production of low-quality steel from scrap metal, which authorities had cracked down on in recent years, has sprung back to life. Steelmakers, anticipating a rise in prices thanks to public works projects and monetary easing, have been quick to ramp up production.

Xi's government is rushing to secure workers for government projects. But the effect will be only temporary, and regional economies risk being left more reliant than ever on debt. Allaying the frustrations of rural citizens to guard against social unrest will be a critical challenge for Xi.