TOKYO -- At the famous Shibuya "scramble crossing" in Tokyo, about 3,000 people scurry across the street each time the light turns green, (mostly) without colliding into each other, leading some foreign visitors to speculate that the pedestrians must be ninjas.

But the fact that tourists are drawn to the busy multidirectional intersection is no mere happenstance; it is part of a carefully planned effort by the district to attract foreigners hungry for unique experiences in Japan.

"Only in recent years has the scramble crossing in Shibuya become a popular tourist spot," said Jungo Kanayama, chairman of the Shibuya Tourism Association. "Something new happens here every day, which encourages people to come here and tour the area. That is what we hoped to see," he said.

Shibuya is just one of many places in Japan that are trying to attract visitors with "experience tourism." Prefectures and cities across the country are levying their local histories and attractions in the fight to win more tourists and their spending. It is a departure from the kind of tourism Japan experienced a few years ago, when a wave of tourists, mostly from China, came to Japan to shop and load up on Japanese products.

Because the Shibuya district is known mostly for shopping and has few historical landmarks, the community decided to make its own tourist attractions. That strategy is paying off.

When the tourism association set out to create a sightseeing map targeting families, planners asked elementary school students to help. If the map had only included points of interest to adults, kids might be bored and spend their time glued to their gadgets. The input from schoolchildren helped the association create a more family-friendly map.

Thanks in part to the popularity of the scramble crossing, Shibuya ranked fifth by number of foreign visitors among Japanese municipalities in 2018, according to an analysis based on data compiled by a subsidiary of wireless carrier NTT Docomo.

In terms of spending, it did even better. According to data on expenditures by Chinese tourists using JCB-brand credit cards, Shibuya topped the list of domestic municipalities, accounting for more than 10% of the cardholders' total spending in Japan. This sizable chunk may be due to the fact that foreign travelers who start tours in western Japan tend to spend heavily in Shibuya, often their final destination before heading home via Haneda or Narita airports.

This has not gone unnoticed by other Japanese hot spots outside the capital, which want a larger piece of the growing tourism pie.

Takayama, in Japan's central Gifu Prefecture, has a number of popular attractions, including Takayama Jinya -- the provincial seat of government between the early 1600s and the mid-1800s -- and a riverside morning market. The city is beefing up services for foreign travelers, and now offers information on its tourist website in 11 languages. This has contributed to a rise in tourist spending, with one key to success being services tailored to specific groups. Less well-known rural areas are also touting their unique cultural heritage or natural surroundings to lure tourists. Yamagata Prefecture, in northern Japan, is promoting "spiritual culture tourism." The area abounds in sites with spiritual significance, such as the three sacred mountains of Dewa. These and other places are drawing increased interest from Western visitors. The three mountains -- Mount Haguro, Mount Gassan and Mount Yudono -- have been designated Japan Heritage sites by the Cultural Affairs Agency.

Recently, one French tourist and his family went on a pilgrimage to Mount Haguro. After staying overnight at a lodge for worshippers, they climbed the mountain to pay homage at Ideha Shrine, clad in the simple dress of ascetic mountain priests. Kazuhiro Hayasaka, owner of the lodge, led the ascent. "With fewer Japanese tourists interested in this type of hiking tour, foreigners -- mostly Westerners who book tours like this via the internet -- now account for 30% of all bookings," Hayasaka said. "Often, on weekdays, tour participants are all foreigners."

It took the family more than two hours to climb the 2,446 stone steps to the top of Mount Haguro, with Hayasaka explaining sites along the way, such as an ancient five-story pagoda. When they reached the shrine, the family performed a ritual offering of a branch from a sacred tree. 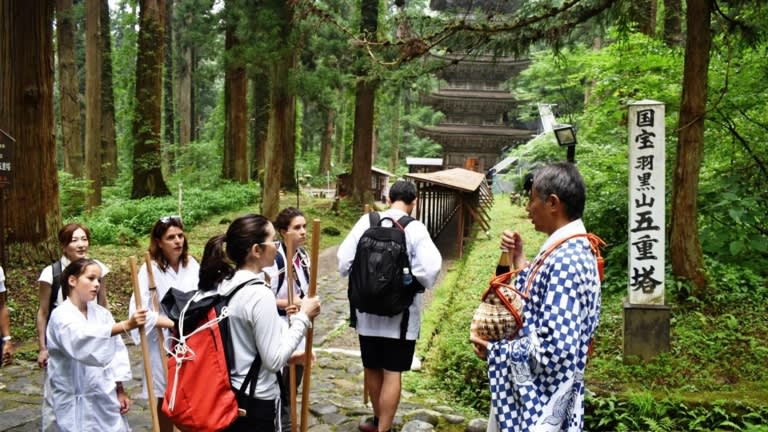 Spiritual tourism, such as this pilgrimage to the top of Mount Haguro in Yamagata Prefecture, is increasingly popular with Western visitors to Japan.

Other parts of the country are also showcasing their attractions. The Chugoku region in western Honshu and the nearby island of Shikoku owe much of their recent popularity to photogenic beaches, an international art festival and the Hiroshima Peace Memorial Museum.

As sunset nears, foreign tourists gather at Chichibugahama Beach in the city of Mitoyo, which saw a 110% rise in foreign tourists in 2018 compared with two years earlier -- the largest gain of any city on Shikoku. The beach offers magnificent views of the Seto Inland Sea, prompting The Guardian, a British newspaper, to describe the site as "the Japanese beach that became an Instagram sensation." The scenes shared on social media help attract more travelers.

At dusk in early August, a number of couples from South Korea milled about, taking in the view and posing for photos. One couple said they heard that they could capture the reflection of the sunset on the water. Unfortunately for the local tourism industry, there have been fewer South Koreans of late due to a diplomatic spat between Japan and South Korea.

Overseas media coverage has been a boon to Shikoku. A growing number of reports call the Setouchi area and Shikoku must-sees in Japan. One catalyst was the Setouchi Triennale 2016, an international art festival.

Shikoku offers both traditional and contemporary diversions. Matsuyama, in Ehime Prefecture, is home to Dogo Onsen, one of the oldest hot springs in the country. Last year, 290,000 foreign tourists visited the city, placing it fifth in the Chugoku-Shikoku region and second on Shikoku to Takamatsu.

"Foreigners have become increasingly visible among tourists visiting Matsuyama Castle and Dogo Onsen," said an official at the Matsuyama City Office. China Eastern Airlines started operating direct flights between Shanghai and Matsuyama, followed by Eva Airways, which began service from Taipei to Matsuyama in July. Encouraged by the new arrivals, Matsuyama is collecting data on the habits of foreign tourists in a tie-up with NTT Docomo and local lodging facilities with the aim of increasing repeat visitors.

As more people come to Japan for experiences, rather than goods, Shibuya and other destinations are finding new ways to highlight their unique charms. Attracting these discriminating, veteran travelers is more important than ever for Japan's tourism industry.