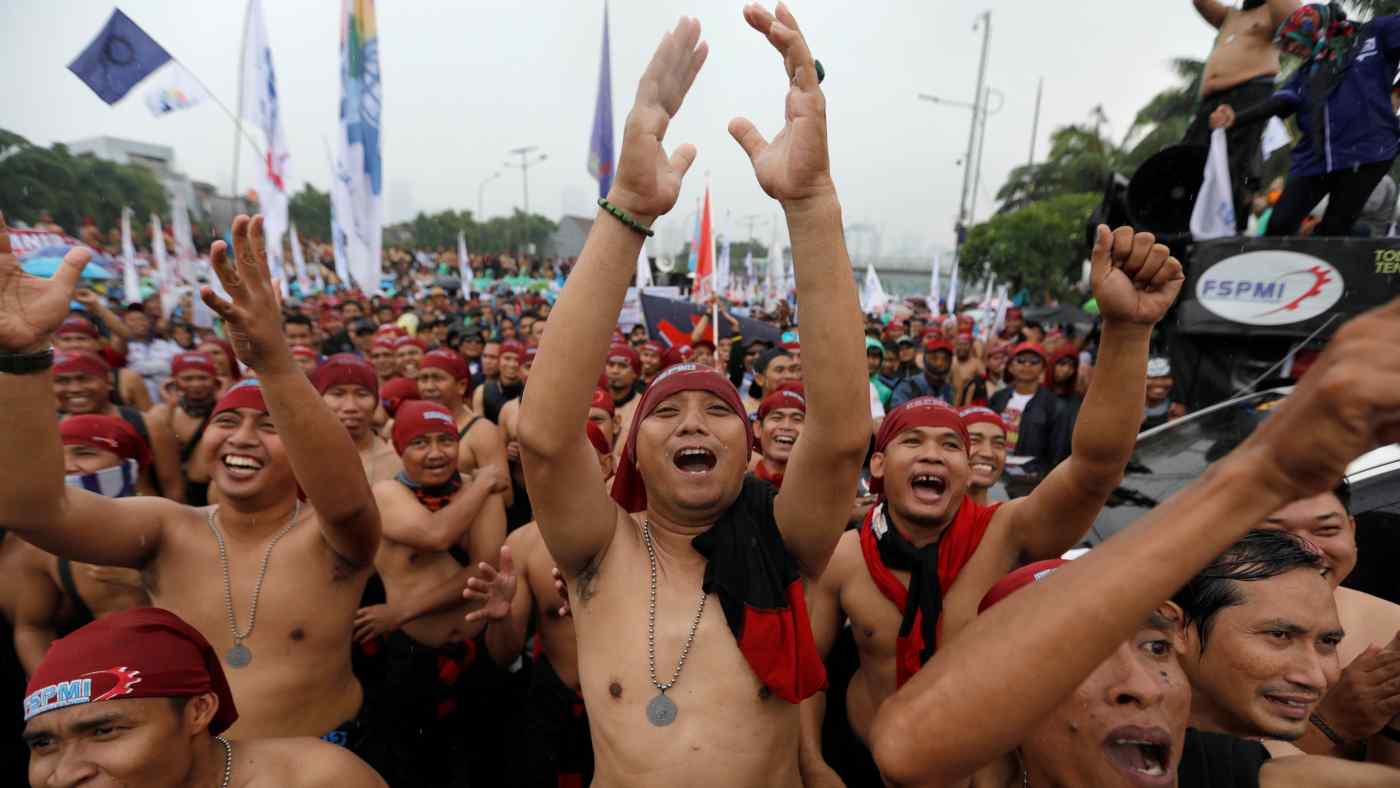 More than 1,000 people rallied peacefully outside parliament in Jakarta on Monday, the latest in a series of gatherings in recent weeks to protest Widodo's effort to push through an "omnibus" bill on the labor market that packages a number of legal revisions into a single vote.

The changes are slated to make it easier from companies to hire and fire employees, and make investments. Other omnibus laws being prepared include legislation on lowering corporate tax rates and measures to help smaller companies.

But opponents say they will harm worker welfare. "We ask the parliament to cancel the employment omnibus law," Said Iqbal, chairman of the Confederation of Indonesian Worker Unions, said on Monday. "It gives no protection to the future of workers, prospective workers and young people who will enter the workforce."

The bill, once submitted to parliament, is likely to pass as Widodo's ruling coalition controls about three-quarters of the seats in the chamber. The question is whether the president is willing to spend political capital to push through the reforms, which he has made a pillar of his second term.

"With such big promises of reform, the impact to Jokowi's administration if this law is withdrawn will be very severe," said Hendri Satrio, a professor of political communication at Paramadina University in Jakarta. "And further pushback [from the public] will also damage Jokowi's image as a leader."

Widodo instructed his staff last week to consult all stakeholders over the bill and to make the draft public before submitting it to parliament. But nothing has been published yet, adding to protesters' fears that they will be harmed by the proposed changes. Indonesian President Joko Widodo has made reform of the labor market a signature policy for his second term.    © Reuters

The labor and investment portions of the omnibus legislation cover 11 broad areas and modify 79 existing laws. These include simplifying the process of applying for permits and setting up businesses, as well as making it easier to purchase land, according to a presentation to journalists by the Coordinating Ministry of Economic Affairs.

The government argues the employment and labor aspects of the law will benefit workers, saying that the bill will stipulate that minimum wages will not be cut, and that contracted workers will receive the same rights and protections as permanent employees.

Current labor law makes it hard for companies to fire underperforming employees and requires them to pay large severance packages, which discourages hiring. Some compensation packages, in months of salary, could be over two times the years of service, according to Citibank's Indonesian unit. Partly as a result of these rules, the World Bank estimates that 79% of Indonesia's nonagricultural employment is informal.

There was no mention of the severance pay issue in the ministry's presentation material, but the bill includes a "Job Loss Guarantee" scheme that will provide unemployment and other benefits to laid off workers.

"This probably sets the stage for lowering the severance payments that companies must pay," said Helmi Arman, an economist at Citi Indonesia.

The president has already missed several deadlines to submit the omnibus bill to parliament. He had initially hoped to present it, along with legislation on taxation, by the end of last year. He requested on Jan. 15 that the draft legislation be completed by the end of last week, but that date was also missed.

In his first term Widodo introduced the online single submission, an electronic business registration system designed to make it easier for business owners to obtain key permits. But that change had little effect on investment.

To lift economic growth above the 5% or so that it has seen over the past half-decade, Indonesia needs more capital from abroad.

The government has calculated that every additional percentage point of economic growth in Indonesia produces 400,000 new jobs annually, so 5% growth should translate to 2 million jobs -- the same figure as annual entrants to the labor market.

But with the youth unemployment rate hitting 16.1% last year, speeding up the country's economic expansion has become increasingly urgent.