Shenzhen and Jakarta shine in city economy forecasts for 2030 TOKYO -- U.S. cities have a firm grip on the ranking of the biggest urban economies on either side of the Pacific, but a power shift lies ahead within Asia, new data from the Japan Center for Economic Research shows.

Singapore was Asia's top city by nominal gross regional product per capita in 2015 and will maintain that position in 2030, according to JCER's Medium-Term Asian Economic Forecast for 2018 through 2030, released on Wednesday.

Among 77 major American and Asian cities, the city-state ranked 14th in 2015, with all of the top 13 positions going to the U.S., led by San Francisco. Singapore will slip only one place by 2030, while Hong Kong -- Asia's second entry on the list -- will hold steady in 17th.

After that, though, the Asian outlook changes in JCER's report, titled "Emerging cities, sinking cities in Asia."

Four Japanese cities were nestled in 18th to 21st place: Tokyo, Nagoya, Osaka and Fukuoka. But by 2030, Osaka will be overtaken by Seoul, Shenzhen and the Yangzte Delta region cities of Nanjing and Changzhou. Fukuoka will drop down to 30th, behind other Chinese cities and Jakarta. Shenzhen shows how catching the wave of the digital economy can propel a city's growth. The hotbed for smartphone-related industries is poised to close in on Tokyo and Seoul.

More broadly, Jakarta and other Southeast Asian capitals are set for noticeable leaps in GRP per capita, while South Korea's Busan and Taiwan's capital of Taipei look destined to fade.

Jakarta is poised to leap to 28th place in 2030 among the 77 cities, from 41st in 2015. This will make the Indonesian capital Asia's 13th-largest urban economy, and the largest in Southeast Asia, ahead of Bangkok.

As for China, there is a divide: Inland cities such as Hefei, Wuhan and Chengdu are set to rise while northeastern centers such as Shenyang and Dalian fall. Harbin and Changchun, both of which are also in the northeast, are set to lose ground domestically, too. 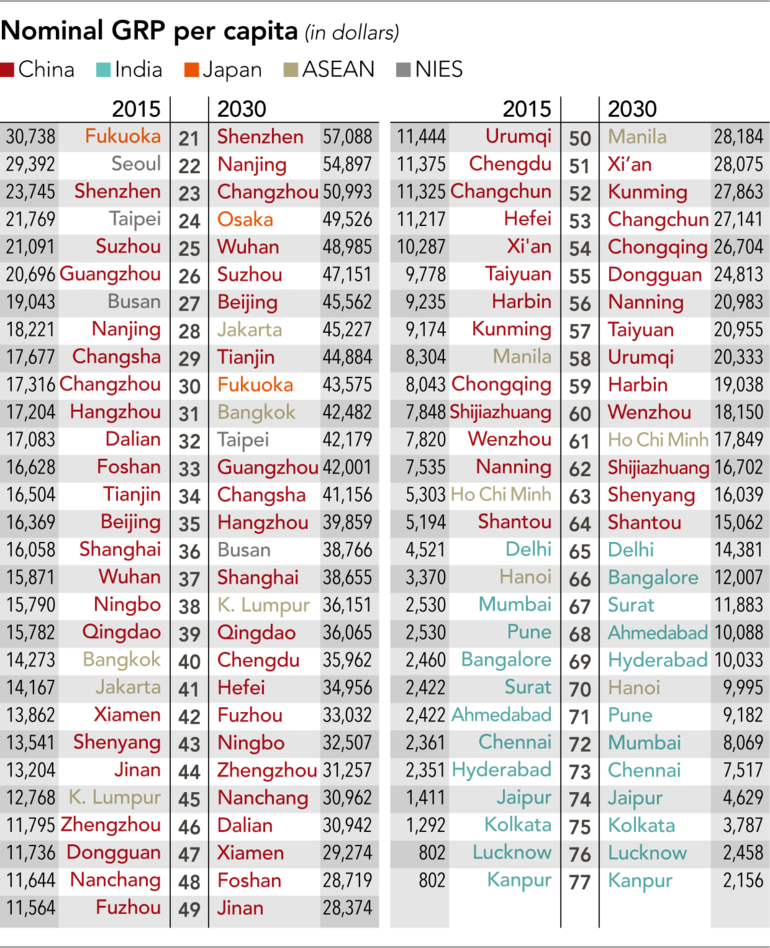 China's northeast has a concentration of state-owned enterprises. Cities in the region face a dilemma between promoting growth through reform and maintaining employment.

All told, the forecasts cover major cities in 13 key markets: the U.S.; Japan; China; India; the Newly Industrialized Economies of South Korea, Taiwan, Hong Kong and Singapore; and the ASEAN5, which includes Indonesia, Thailand, Malaysia, the Philippines and Vietnam. The data offers a window on not only per capita GRP, but also overall nominal GRP and future populations.

When it comes to economic scale, measured by nominal GRP, large cities in China will rise while Japanese ones will fall.

Four Chinese cities -- Beijing, Shanghai, Shenzhen and Chongqing -- are set to enter the top 10. Osaka will slip to 11th in 2030 from fourth in 2015. Tokyo will hang onto second place, but its figure will be only double those of Shanghai and Beijing in 2030, versus quadruple in 2015.

In the middle and lower rungs, where many Indian and Southeast Asian cities rank, Delhi and Manila stand to surge as their infrastructure development progresses.

JCER's study projects Asia and the U.S. will have 32 "megacities" with populations of at least 10 million by 2030. Only two of them will be in the U.S.

Cities in India and China will jump up the ranks, in line with nationwide population growth. Industry-reliant cities in northeastern China will be the exception. And cities in mature industrialized countries like Japan and the U.S. will decline.