'Prophetic' essay from 2001 criticized overreliance on speed and efficiency 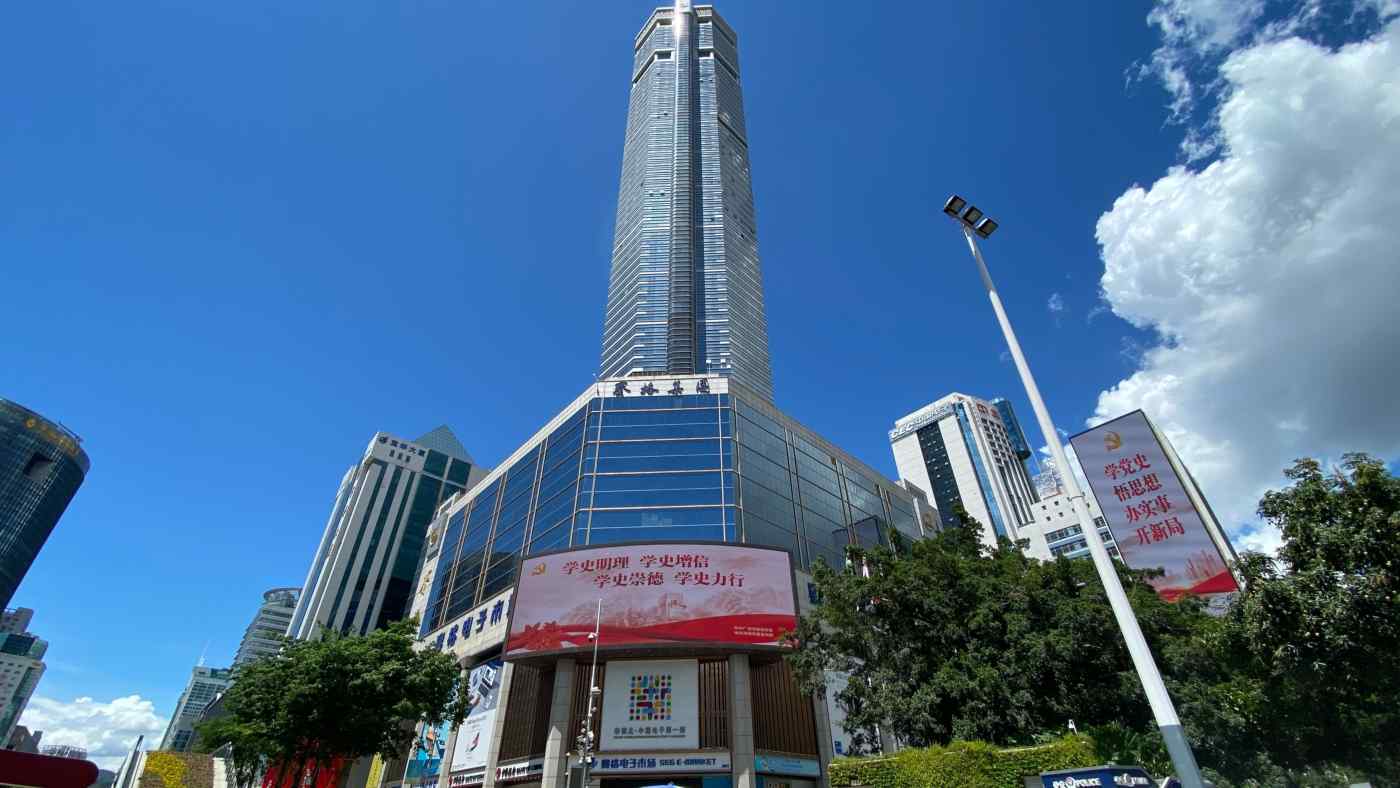 GUANGZHOU -- In May, a skyscraper in the southern Chinese city of Shenzhen suddenly started to shake, sending people rushing to evacuate.

Two decades ago, an essay analyzing the construction project for the building was eerily prescient, in that it pointed out the dangers of overzealously pursuing speed and efficiency. It highlighted the societal distortions caused by this outlook, which seems to have taken root throughout China.

On May 18, SEG Plaza in Shenzhen's largest electronics shopping district started shaking so much as to be visible from the outside. People working in the building and its immediate vicinity scrambled to get out of the area. Videos capturing the confusion were uploaded to Chinese social media, attracting significant attention.

The shaking was not caused by an earthquake. Local media reported that authorities suspected a number of simultaneously occurring factors -- including vibrations from winds and subway trains, as well as temperature differences -- set the building in motion. Similar shaking continued sporadically, eventually forcing the company owning the building to ban entry to it on May 21.

The 70-plus-floor SEG Plaza, which is mainly a huge market for electronics components and offices, was completed in 1999, though some interior work remains unfinished. Since its inception, the building has attracted attention from engineers and architects owing to its height of 350 meters and construction, in which columns were formed by filling steel pipes with concrete -- a rarity in China at the time. It was also built fast, with just an average of 2.7 days spent on each floor when three days was considered fast. The project came to symbolize Shenzhen's spirit of prioritizing efficiency and what is known as "Shenzhen speed." 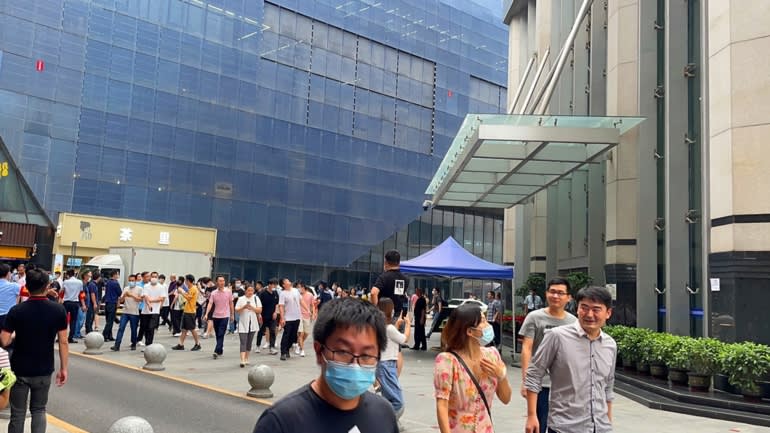 People evacuate SEG Plaza, right, and environs on May 18 after the building suddenly started to shake.   © AP

The shaking incident attracted a great deal of attention due to the symbolism attached to the structure. And with renewed interest in the building comes the reemergence of a "prophetic" 2001 essay about the construction project. The paper, entitled "Analysis of Shenzhen SEG Plaza construction project," was written by Jin Dianqi, who at the time was enrolled in graduate studies at Huazhong University of Science and Technology. She also took part in the project as a Shenzhen Electronics Group insider.

Jin's paper assessed the SEG Plaza project from different perspectives, including planning, design, construction and operation. For example, it viewed the post-completion phase in a positive light, noting that attracting electronics component makers as tenants helped increase the occupancy rate early, leading to a steady recovery of the investment. Overall, the paper praises the project, saying it "achieved success in both reputation and substance and demonstrated the attractiveness of 21st century Shenzhen architecture."

However, the paper notably criticized the design and selection of contractors: "In view of China's technological level ... such a large project should have allowed overseas design offices to participate in the bidding. The project seemed driven by narrow-minded nationalism resulting in adherence to 'purely Chinese' participation as regards design, construction and management."

According to Jin, over 1.2 billion yuan ($186 million at the current exchange rate) was invested in SEG Plaza. But the design company was chosen through a competitive bidding process open only to Chinese companies. Construction work was started before the design was completed, resulting in portions of work proceeding in a somewhat haphazard fashion. The antenna at the top of the building wobbled due to a design issue. Its length was adjusted but the new calculations again included errors, resulting in more corrective work.

Shenzhen speed, which is achieved by prioritizing speed and efficiency while tolerating a degree of failure, has been regarded as something of a virtue. It has served as a role model for the rest of China, allowing flexible decision-making by government authorities and daring strategies by companies -- two attributes deemed necessary for economic growth and societal development. 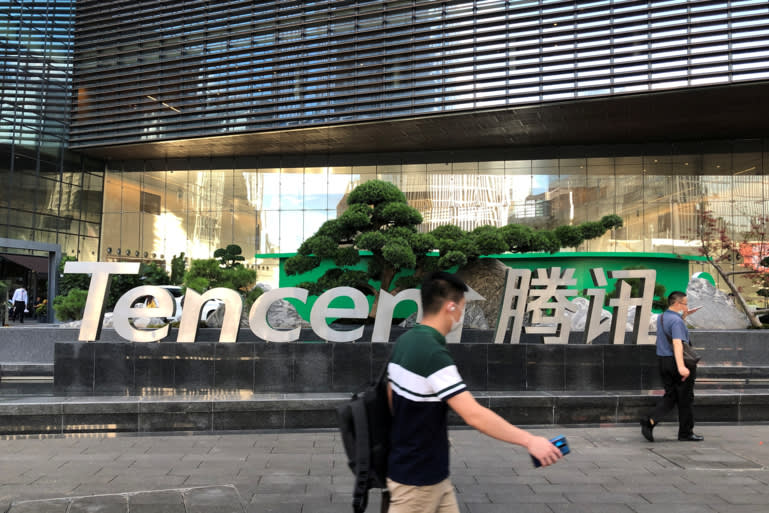 In Shenzhen, major global companies such as Tencent Holdings have headquarters. (File photo by Reuters)

Huawei Technologies and Tencent Holdings, two Shenzhen-based companies that are nearly household names around the world thanks to bold investments in R&D and service expansion, are exemplars of Shenzhen speed. Another instance of this principle in action is rapid deployment of a 5G network over the entire city at the fastest pace anywhere in China last year. Shenzhen University, which has seen its prestige soar by aggressively hiring foreign researchers, also symbolizes Shenzhen speed.

The city, which has seen its gross regional product grow 10,000 times compared to four decades ago and where new laws are often trialed before being introduced to the rest of the country, has become the crown jewel among all China's cities.

As Shenzhen pursued speed, however, societal distortions emerged, one being the problem of skyrocketing prices of real estate, including homes. Authorities have tightened regulations on property transactions to contain rising prices, but a large number of companies are able to dodge the measures.

The city government has recently stepped up efforts to address such issues. In February, it began setting "reference prices" for existing homes and called on agents and financial institutions to help contain the overheating market. But the move may appear to have stoked concerns about a revival of China's planned economies of the past. Furthermore, in late May, the Shenzhen government announced the drafting of a new rule that would raise the academic background criteria for the family register to the university graduate level from the current junior college level. This measure is also aimed at containing the overheating home market.

Until now, Shenzhen's growth has been supported by a large labor force, which the city has encouraged by accepting a broad scope of people from rural areas.

All these measures are aimed at slowing the blistering pace of growth of Shenzhen's society and economy. The measures may yet herald a turning point for China, which has continued to grow at a rapid rate rarely seen in the world.

And that is why Jin's paper, which was critical of the sloppy ways and arrogance associated with Shenzhen speed, and the shaking high-rise are causing the Chinese to pause and rethink their speedy growth.