BEIJING -- This city of Shijiazhuang in China's Hebei Province is quickly becoming known for having some of the dirtiest air in the country. 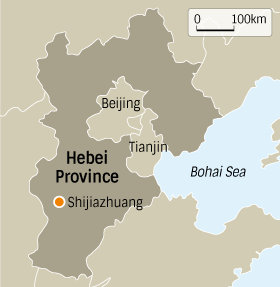 The view from the high-speed train that travels the roughly 300km southwest from Beijing to Shijiazhuang is one of smog. A taxi driver in the city said the city's air is always like this.

China's environmental agency has been publishing the air quality of the country's 74 largest cities each month since January last year. Up until last December, Shijiazhuang was always one of the three worst cities on the list.

Hebei Province is home to a numerous thermal power plants and foundries that consume large quantities of coal and show little initiative toward containing pollution.

Hebei Huadian Shijiazhuang Thermal Power, at one of the area's largest coal-fired power plants, has installed an electronic readout at the entrance that displays exhaust pollutant levels. This shows that the place is at least aware there is an issue. However, many factories lining the roads that lead out from Shijiazhuang's center are old and inefficient. 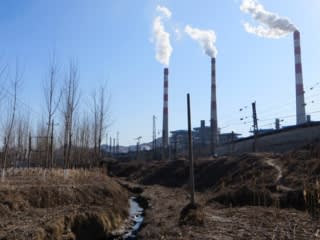 The province is home to numerous state-run producers of steel, chemicals, cement and other industrial materials. Also, since 2005, Beijing has encouraged manufacturers to move their coke ovens from the capital area to the province, which encircles most of the capital. This was at first done with the 2008 Beijing Summer Olympics in mind. Hebei is now the second-largest energy consumer among China's 31 government-ruled municipalities, provinces and autonomous areas.

Yang Zhiming, deputy director of the Hebei provincial bureau of environmental protection, told the state-run Xinhua News Agency that the provincial government would make every effort to fight air pollution in the province. The regulator is implementing a variety of actions, including the removal of inefficient coal-fired boilers.

Hebei is also one of the country's poorest coastal province. According to local media, officials in the province were forced by those above to take on these dirty industries for the sake of the nation's economic development, and at the cost of the environment. As of 2012, the province's per-capita gross domestic product was 36,584 yuan ($6,033), roughly 40% that of Beijing. 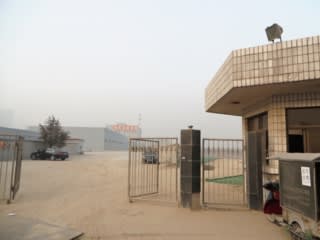 Tianyang Food's factory where frozen dumpling were poisoned has been demolished, and will soon be home to a logistics center.

Six years ago, the province gained another black eye for an incident in which consumers in Japan fell ill from eating frozen dumplings that were made in Shijiazhuang. The seasonal factory worker convicted of lacing these dumplings with poison is reportedly from a poor family in Shijiazhuang. He was also frustrated with the unfair treatment of temporary workers, especially in terms of compensation.

The incident became a diplomatic issue between Beijing and Tokyo. Last month, the district court of Shijiazhuang handed the man a life sentence.

According to a woman running a nearby grocery store, the Tianyang Food processing factory where the incident occurred was torn down about a year ago. A logistics center is expected to be built on the site, which is about 5km south of downtown Shijiazhuang.