Stranded container ship Ever Given, one of the world's largest container ships, is seen after it ran aground, in Suez Canal.   © Reuters
SHOICHIRO TAGUCHI and TAKESHI KUMON, Nikkei staff writersMarch 28, 2021 01:14 JSTUpdated on March 28, 2021 03:15 JST | Middle East
CopyCopied

IMABARI, Japan/ CAIRO -- The ship blocking the Suez Canal was mired in the waterway's banks Saturday night local time despite salvage crews successfully making the rudder operational, with hopes dimming for the massive 400-meter vessel to be freed before Sunday.

The operation to dislodge the Ever Given using 10 tug boats was timed with the rising tide, but according a representative from the Japanese company that owns the ship, Shoei Kisen, the work is more difficult than anticipated.

"Tugs started pulling at 15:45 local time, but the ship did not move. Initially the work was expected to take two to three hours, but the tugs will continue to pull, at different angles, until midnight. Two large tugs are on their way, but their arrival has been delayed and are likely to reach the site not until Sunday night," Toshiaki Fujiwara, senior managing director at the company, told Nikkei.

He said after midnight dredging operations would continue as they wait for the large tugs to arrive.

"If we do begin an operation to remove the cargo, that will be from Monday at the earliest," he added.

The effect of the blockage of the vital trade artery for five days was felt on the New York market on Friday, when crude oil futures rose 4% to over $60 a barrel as concerns grew that the traffic through canal would continue to be jammed. 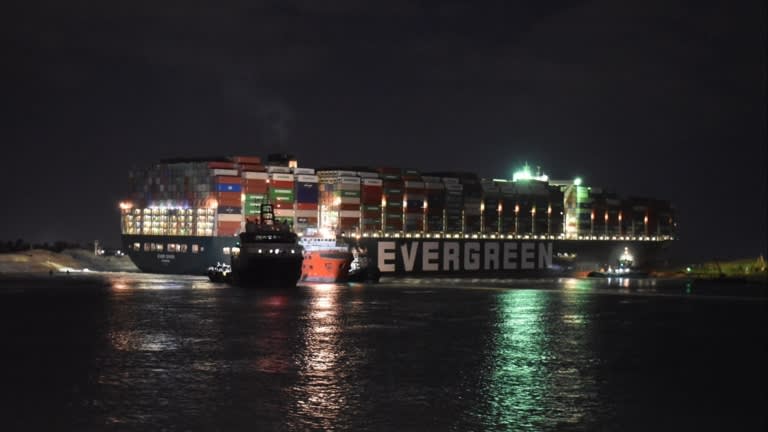 Work to refloat the Ever Given continued to the night. (Photo by Takeshi Kumon)

Bernhard Schulte Shipmanagement, the vessel's technical manager, said two tug boats were being dispatched Sunday to provide additional help. The company said that it was focusing on removing sand and mud on the ship's port side while the Suez Canal Authority estimated that it would be necessary to remove 15,000-20,000 cubic meters of earth and sand.

U.S. White House press secretary Jen Psaki said Friday that the U.S. was ready to provide help for the effort, as CNN reported the U.S. Navy planned to send a team of experts to examine the situation. Companies from Japan and the Netherlands were already on site working to release the ship, while Turkey, whose relations with Egypt have soured lately, has offered to send a tug boat.

More than 200 vessels are stuck around the canal waiting to pass through the waterway, but more are considering taking the longer alternate route around the Cape of Good Hope at southern tip of Africa.

Fears of rising transport costs are also fanning buying on oil futures markets. A prolonged closure would disrupt shipments of Mideast crude oil and natural gas to Europe, which in turn could raise the price of Brent crude futures, an international barometer of energy prices. 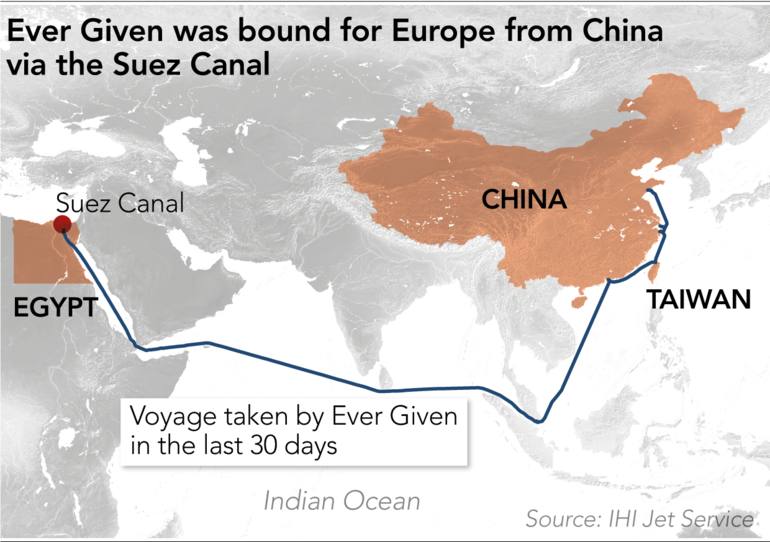 "A rise in international crude oil prices will be a burden on Japanese companies," said Tomomichi Akuta, senior energy researcher at Mitsubishi UFJ Research & Consulting. "Going around the Cape of Good Hope, will push logistics costs up and put downward pressure on the economy."

But some analysts say as more European cities reimpose lockdown measure to combat the pandemic and the arrival of spring will lower demand for fuel, limiting price rises.

A prolonged closure could also flood the Asian market with oil and gas as supplies are diverted to that region instead of Europe, leading many to believe that prices are not likely to continue to rise.

"Spot prices for Dubai crude and liquid natural glass will fall due to surplus shipments to Asia. For some Japanese companies, this will lead to cost reductions," according to Tatsufumi Ogoshi, senior economist at Nomura Securities.

Additional reporting by Yoshinobu Ono and Yuji Yamamoto in Tokyo