Should the West heed China's siren call for 'Globalization 2.0'?

Chinese Premier Li Keqiang is knocking on Europe's door with a seductive message and a bold sales pitch. The message is one of economic cooperation, and coming in the wake of U.S. President Donald Trump's controversial visit to Europe, his participation in the EU-China summit on June 1-2 in Brussels could not be better timed.

The sales pitch is the Belt and Road Initiative, Beijing's far-reaching vision for new overland and maritime connections. How this pitch is articulated, and whether European leaders are persuaded to support the effort, could help make or break China's bid to lead the next phase of globalization.

But what exactly is China's vision for globalization? It is easy to get lost in rhetoric promoting the BRI, which straddles the past, present and future. It invokes the ancient Silk Road, proudly adopts the recent arguments of Western globalists and yet promises to be something new. These are distinct concepts of global order, however, and the BRI cannot be all three at once. European leaders are right to greet these conflicting messages with some caution.

A bridge, belt and road too far for China?

The first face of China's global vision looks backward to the ancient Silk Road, which is a brilliant marketing device. It is popularly remembered as an adventurous period of commercial and cultural exchanges. New trade routes emerged across the Eurasian landmass, carrying goods and ideas between civilizations. Quoting famous explorers like Macro Polo and Ibn Battuta, and showing images of camels and caravans, Chinese officials tap into this captivating myth.

The real Silk Road was vibrant but also violent. Life was much shorter, nastier and more brutish. Disputes were often settled through force. A move toward the ancient Silk Road would be a move away from institutions and international law. States would exercise power with fewer constraints. Informal and implicit rules would displace formal and explicit agreements. The risk of miscommunication, escalation and conflict would be higher. Despite its enduring imaginative power, the ancient Silk Road is a flawed alternative to today's rule-based international system.

The BRI's second face looks familiar at first glance. Remarkably, China has embraced the language of Western globalists while promoting a Sino-centric vision. In his opening remarks at the recent Belt and Road Forum in Beijing, Chinese President Xi Jinping spoke about upholding the multilateral trading system, liberalizing investment and promoting transparent rules. "We should build an open platform of cooperation," he urged, "and uphold and grow an open world economy." Similar language fills speeches by the leaders of Bretton Woods institutions.

The challenge here is that these arguments are no longer sufficient. In the West, the idea that greater economic openness can leave everyone better off is under assault. With stagnant wages and widening inequality, many middle-class citizens resent being left behind. Technology has been a more disruptive force, but trade and globalization have been easier scapegoats. There is wide agreement that governments must do a better job of addressing these concerns, but there are no quick solutions. Put simply, the old model cannot continue unchanged. 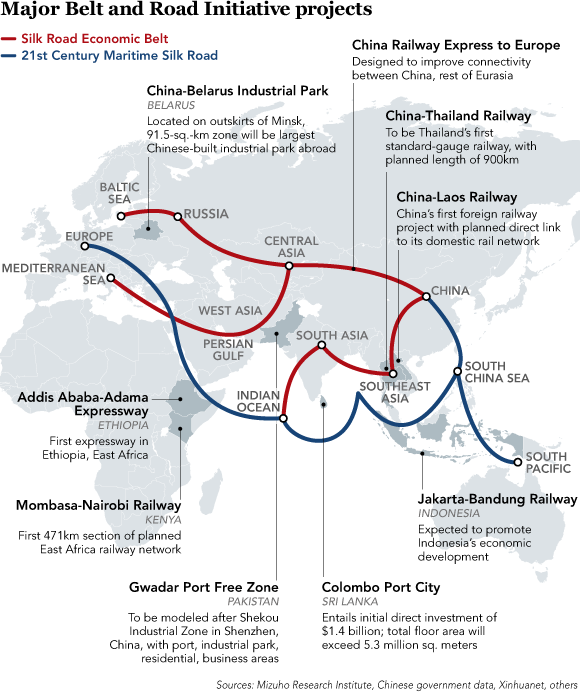 That is why the BRI's third face claims it will succeed where the West's model has stalled. It has found an eager audience. Pointing to the backlash against globalization in the West, participants at the Beijing forum called for new approaches. "We have exhausted many former models and indicators of economic development," Russian President Vladimir Putin declared. Delegates from Asia, Eastern Europe, Africa and Latin America made similar statements. Seizing this opportunity, Chinese officials have cast the BRI as "Globalization 2.0."

Updating globalization is a tall order. A better approach would preserve the facets of globalization that have worked, while improving those that have not and filling gaps that have emerged over time. It would seek to simplify a complex web of trade, investment and transport agreements. It would adopt rules that promote digital commerce, help small businesses compete, and protect the environment. Alongside these international efforts, governments would do more domestically -- through worker training, education and tax reform - so that globalization is more inclusive.

It is not yet clear how the Belt and Road Initiative will address these areas. It seems likely to add to Asia's growing web of bilateral trade agreements. With Chinese state-owned enterprises heavily involved, many large foreign companies are still investigating whether real opportunities exist, suggesting even greater uncertainty for small businesses. In the digital realm, the initiative is likely to reflect China's existing preferences rather than revolutionize them. But these are only early indicators, and with a planned horizon that stretches to 2049, the BRI could evolve.

To be sure, the BRI is far from Asia's only economic initiative, or even its only infrastructure program initiative. Japan is spending heavily through its Partnership for Quality Infrastructure, particularly in Southeast Asia. While India's primary focus is improving its internal connectivity, it is also investing in the Chabahar port in Iran and other strategic projects beyond its borders. Along with engagement from the West, these and other competing visions could push China to sharpen its own sales pitch, address uncertainties and raise standards.

Without a doubt, the BRI has gained traction since it was announced in 2013. Even more important than the summit in Brussels are the changes happening on the ground across Asia. Deals are being signed, massive infrastructure projects are underway and new trade routes are being tested. China is still far from leading the global order, but it is connecting with the world in new ways and beginning to lead the conversation about globalization.

If the West remains silent by failing to help shape the BRI or offering an alternative, China's rhetoric will increasingly become reality.

Jonathan Hillman is the director of the Reconnecting Asia Project at the Center for Strategic and International Studies in Washington, D.C.