With the election over, recovering from the coronavirus is the Singaporean government's No. 1 priority.   © Reuters
KENTARO IWAMOTO, Nikkei staff writerJuly 14, 2020 09:05 JSTUpdated on July 14, 2020 10:33 JST | Singapore
CopyCopied

SINGAPORE -- Singapore's economy shrank 12.6% on the year in the April-June quarter due to sweeping COVID-19 business closures, the government's preliminary data showed on Tuesday, underscoring the challenge facing the leadership after Friday's general election.

Singapore is one of the first Asian countries to report GDP figures for the April-June period, when many economies were under lockdowns. Its sharp drop, steeper than the depths of the global financial crisis, gives an indication of how some neighbors may have fared in the second quarter.

Looking ahead, the top priority for Prime Minister Lee Hsien Loong's new government is to engineer a recovery -- especially after voters sent a record 10 opposition members to parliament, raising the pressure on a ruling People's Action Party that has staked its reputation on economic prowess.

The year-on-year performance was worse than the 10.5% contraction major local lender United Overseas Bank had projected. On a quarter-on-quarter annualized basis, the economy shrank 41.2%, entering a technical recession -- a sequential decline in GDP for two straight terms.

The Ministry of Trade and Industry on Tuesday said the manufacturing sector grew 2.5% on the year in the second quarter, while the construction sector dropped 54.7%. The services sector, meanwhile, shrank 13.6%.

"The road to recovery in the months ahead will be challenging," Trade and Industry Minister Chan Chun Sing said in a Facebook post. "We expect recovery to be a slow and uneven journey, as external demand continues to be weak and countries battle the second and third waves of outbreaks by reinstating localized lockdowns or stricter safe distancing measures." 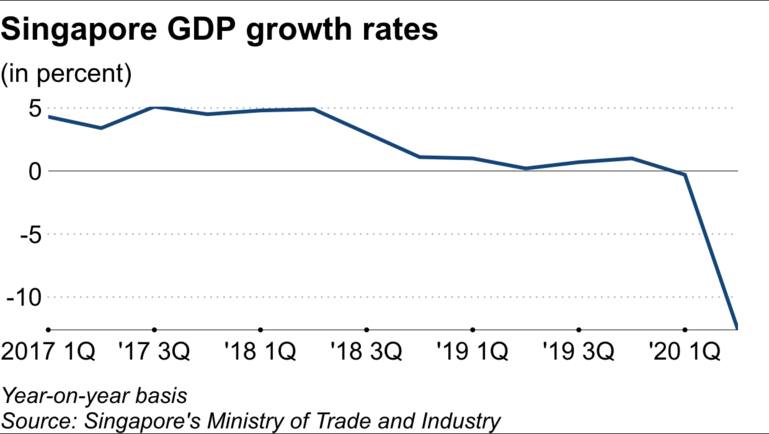 As coronavirus cases rose, Singapore imposed what it called "circuit breaker" restrictions from early April to early June. Most workplaces and schools were closed and residents were required to stay home as much as possible. The country has been gradually resuming business activity since then, but a lack of cross-border travel continues to weigh on an economy that relies on connections with the world.

Growth in the manufacturing sector was "primarily due to a surge in output in the biomedical manufacturing cluster," the ministry said in a statement.

"Construction output weakened on account of the [circuit breaker] measures which led to a stoppage of most construction activities during the period."

The crisis has exacerbated headwinds that were hitting Singapore before the coronavirus, stemming from U.S.-China trade tensions. And the virus itself remains a threat: The city-state has recorded about 46,000 infections, mostly among migrant workers living in crowded dormitories, and has still been logging triple-digit daily increases. The death toll, at least, remains low at 26.

The latest quarterly GDP figure falls below the -7.7% recorded in the first quarter of 2009, during the global financial crisis, and marks Singapore's worst performance since quarterly data became available in 1976. The growth rate in the January-March term of this year was -0.3%.

So far, the government has introduced stimulus packages worth more than 90 billion Singapore dollars ($64 billion), or nearly 20% of GDP. It is also discussing "green lane" travel arrangements with key partner countries, while keeping the trade of goods going.

After the People's Action Party's victory in the election, in which it won 83 of 93 seats, Prime Minister Lee vowed: "I will use this mandate responsibly to deal with COVID-19 and the economic downturn, and to take us safely through the crisis and beyond."