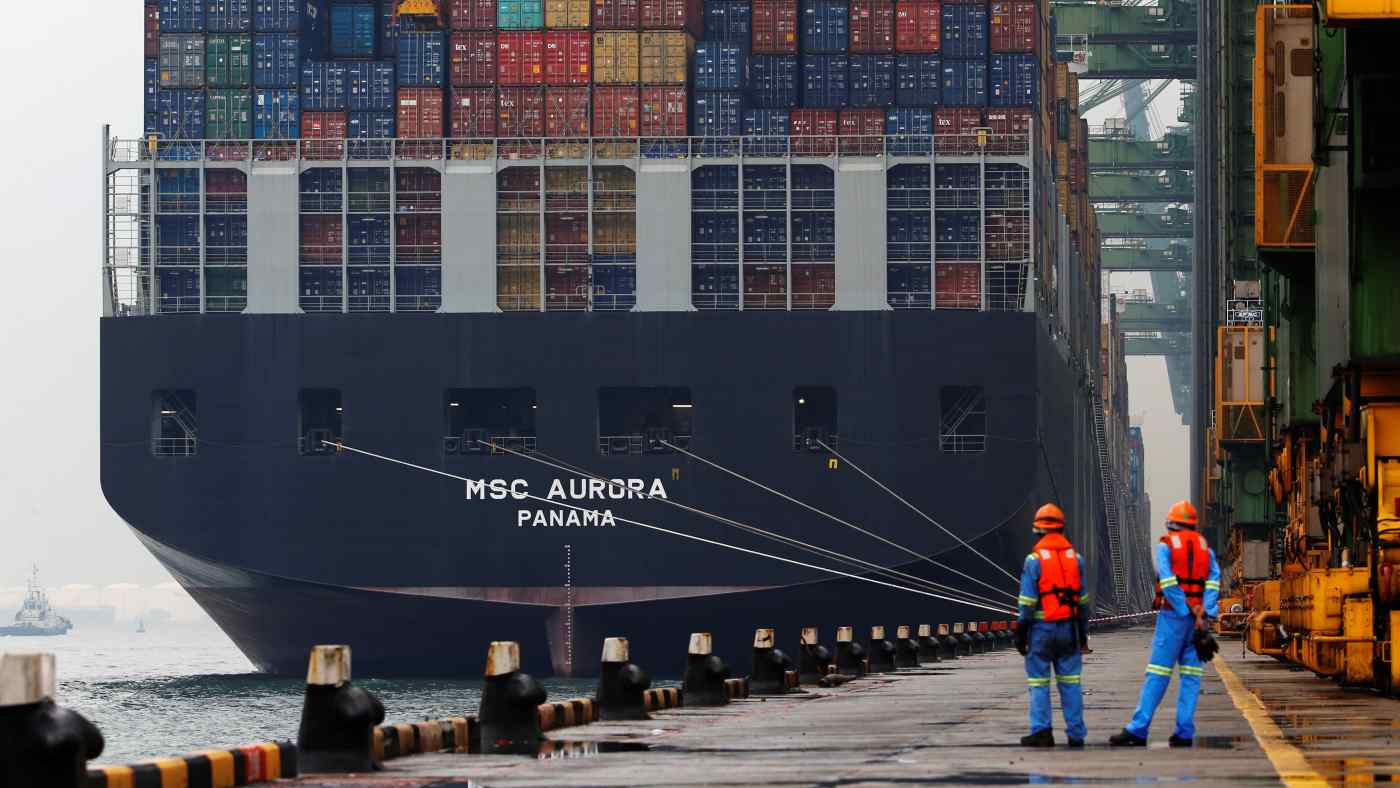 A containership docks at a terminal in Singapore in this file photo: The city-state's relatively brisk exports for 2020 contrast with its record 5.8% GDP contraction.   © Reuters
KENTARO IWAMOTO, Nikkei staff writerJanuary 18, 2021 19:44 JST | Singapore
CopyCopied

SINGAPORE -- Singapore's exports grew 4.3% last year despite the economic recession caused by the COVID-19 pandemic, thanks to persistent global demand for semiconductors and pharmaceuticals -- the city-state's key manufactured products.

Data released on Monday by Enterprise Singapore, a government agency, shows the benchmark non-oil domestic exports -- total exports minus oil and re-exports -- for 2020 came to 172 billion Singapore dollars ($128 billion), up from SG$165 million in 2019.

Exports to the U.S. increased 38% to SG$29.9 billion, while those to China declined 8% to SG$26.3 billion, suggesting manufacturers may have moved some of their U.S.-aimed exports from China to Singapore amid the trade tensions between the world's top two economies.

The rise in the benchmark exports contrasts with Singapore's grim economic picture overall. Gross domestic product contracted a record 5.8% in 2020 as the pandemic hit the tourism and transport businesses, according to preliminary data the government released earlier this month.

But the city-state's strategic focus on high-end manufacturing appears to have paid off. An expansion of pharmaceuticals shipments "underlined Singapore's vital role in the production and exports of biomedical products, especially during the COVID-19 pandemic," local lender United Overseas Bank said in a note.

Moreover, in December, exports of electronics products increased 13.7%, backed by integrated circuits as well as computer parts -- demand for which is rising alongside accelerated digitalization during the pandemic. Semiconductor demand is projected to increase this year, according to the World Semiconductor Trade Statistics, which would continue to help Singapore's exports.

"Looking into 2021, we are expecting a moderated growth of 1-2% for Singapore's [non-oil domestic exports]," Howie Lee, an economist at Singapore's Oversea-Chinese Banking Corp., said in a note. "The high base from this year may prove to be a hurdle, but we expect demand for electronics and biomedical goods to continue driving growth for the country's exports, particularly on 5G infrastructure needs and possibly COVID-19 vaccine requirements."