SINGAPORE -- Delivery drivers and other "gig economy" workers have emerged as essential in the pandemic. Now, Singapore aims to offer them more support, with Prime Minister Lee Hsien Loong singling out their "employee-like relationships" with online platforms that offer little security.

In a National Day Rally speech on Sunday evening, Lee said he was "especially concerned" about delivery workers, as his government aims to address the struggles of low-wage earners in general.

"They work with online platforms like Foodpanda, Grab or Deliveroo," he said. "They are a familiar sight, especially during COVID-19, delivering our orders day and night. It is hard work, and most earn modest incomes."

Lee also announced that Singapore had reached an 80% full vaccination rate, paving the way for a further gradual reopening. But with the gig economy well-entrenched and still expected to grow, the prime minister said the Ministry of Manpower is "studying" how to create better working conditions, including through consultations. While he did not say what measures are in store, the outcome could affect some of the biggest names on Southeast Asia's startup scene, which have grown rapidly on the backs of such workers.

In Singapore, three platforms dominate the food delivery sector. Homegrown Grab and Foodpanda accounted for 42% and 34% of the market last year, respectively, while Deliveroo of the U.K. had a 24% slice, according to research by Singaporean consultancy Momentum Works. Thousands of people are estimated to be working as "partners" -- not employees -- of these companies.

Operators are also expanding grocery delivery services, in which drivers pick up items from supermarkets or convenience stores and drop them off.

As the sector has expanded, it has been absorbing many workers who were displaced or suffered pay cuts due to the pandemic. Manpower Ministry statistics show 228,200 people were engaging in "own account work" -- which may include other types of freelancing -- in 2020, up 8% from 211,000 a year earlier. Among them, people engaged in such work for "non-preferred" reasons increased 74% over the year.

"More people are taking up this type of work, so this problem is growing," Lee said. "We must address the issues to give these workers more secure futures."

To hammer home his point, the prime minister showed a video clip filmed by a college student, which depicted a delivery worker's misery. The driver was pressured to complete 30 deliveries to get a bonus, but only managed to finish 29.

"Delivery workers are for all intents and purposes just like employees," Lee said. "The online platforms set the price of their product. They determine which jobs are assigned to which workers. They manage how the workers perform, including imposing penalties and suspensions."

But without employment contracts, delivery workers "lack the basic job protections that most employees enjoy."

Asked to comment on Lee's remarks, a Grab representative told Nikkei Asia the company is "supportive" of the government's move and "looks forward to further discussions."

The representative added that it has offered a variety of programs for its gig workers, such as additional income support for those serving quarantine orders or hospitalized due to COVID-19. The spokesperson emphasized that gig workers "enjoy many flexibilities that employees do not have," saying they are free to move between platforms or stop work anytime. "Therefore, a coordinated approach with common standards across the industry could help ensure that they receive similar protections even if they move between companies."

Likewise, a Foodpanda spokesperson said that the welfare of its delivery workers is "always important" and that it invests heavily in support programs, such as subsidized insurance.

"The reality is the bulk of our riders are transient and are on the platform for a brief period of time as a supplemental gig -- that's the uniqueness of the gig economy, the flexibility and freedom for riders to choose what works for them is a key consideration for their joining," the spokesperson said. "Foodpanda is committed to ensuring the platform is inclusive and accessible for all riders' needs." 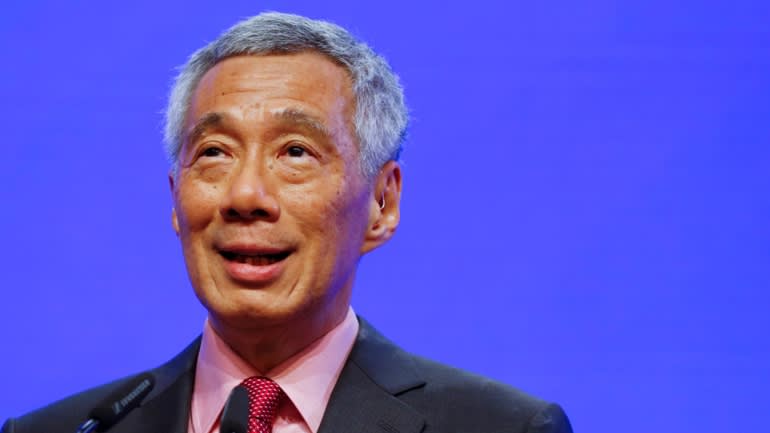 Lee is not the first to highlight the strain on gig workers. From Association of Southeast Asian Nations members to South Korea and China, a tech underclass has emerged amid the COVID-19 crisis.

In some jurisdictions in the West, platforms are now required to treat drivers as employees rather than independent contractors, which entails higher labor costs.

Yet in Southeast Asia, while platforms do provide some training and welfare programs, the companies have largely avoided treating their gig workers as employees. Like Grab and Foodpanda, some operators note that workers themselves prefer their flexible arrangements. Arguably, in some emerging economies, the platforms have also provided better jobs and higher incomes to informal-sector workers.

But with Lee raising the issue in one of his highest-profile appearances of the year, industry players will be closely watching Singapore's next moves.

"All of us, as consumers, must also chip in," he said. "It will not only enable the workers to keep their jobs at higher pay. It will also show that as a society, we value their work and contributions, and that they are part of us."

For Singapore, reducing the stresses on low-wage workers would go hand in hand with the government's efforts to foster an image of an open, fair society. Tan pointed out that Singapore's minority groups are "overrepresented" among such workers.

"The hopes and aspirations of an egalitarian society necessitate looking out for delivery workers so as to ensure that they and their families are not left behind," Tan said. "This importance of respecting and recognizing the dignity of work and a decent wage for workers, especially the 'front-liners,' is crucial for the well-being of society and the performance legitimacy of the ruling party."