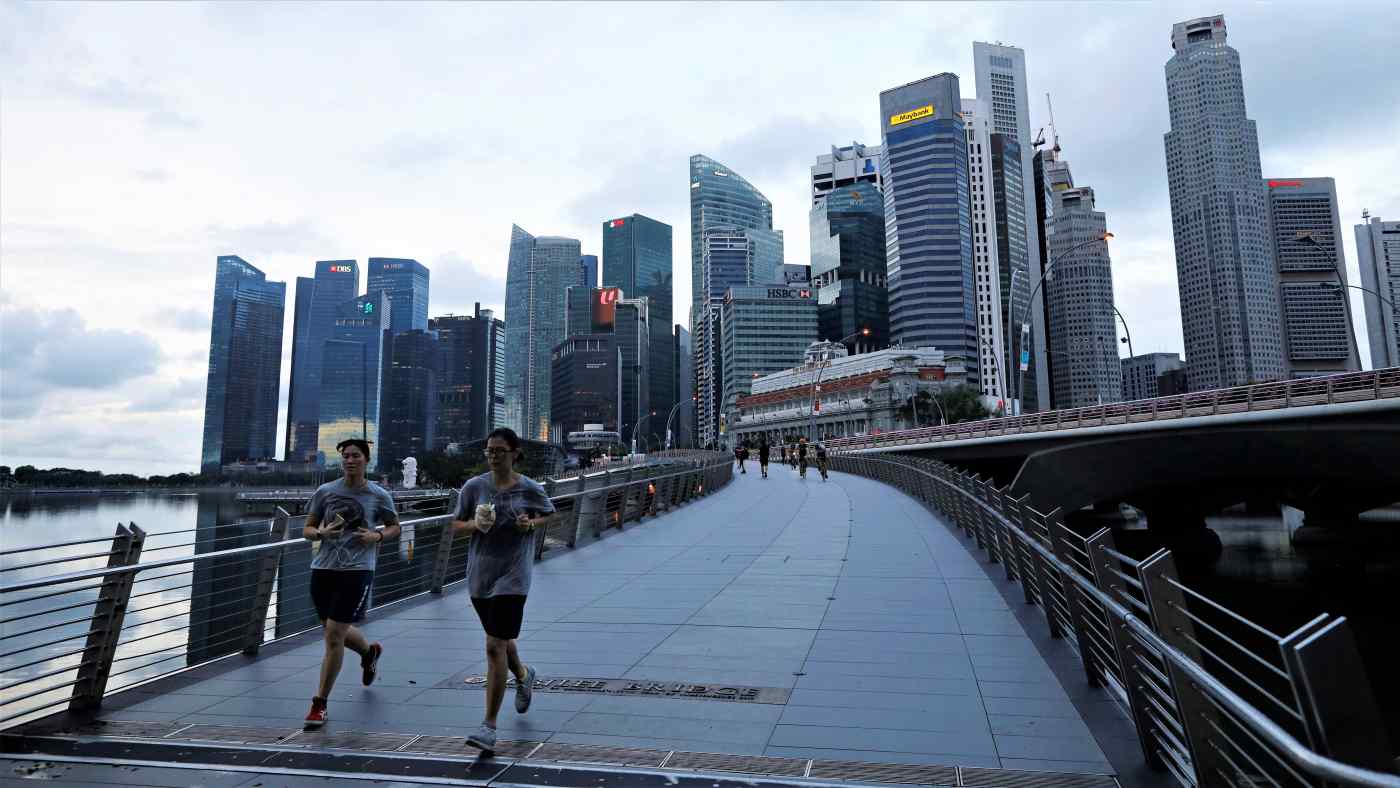 SINGAPORE -- Singapore is sticking to its economic growth forecast for this year even as the Russia-Ukraine war drives inflation and casts a shadow over the city-state's economic recovery from COVID-19, the government said on Wednesday.

The Ministry of Trade and Industry said it was keeping its projection of annual gross domestic product growth at between 3% to 5%, although the result is "likely to come in at the lower half of the forecast range." For the January-March period, it revised its growth result to 3.7%, a touch higher than the preliminary figure of 3.4% announced in April.

By sector, manufacturing grew 7.1% in the first quarter, but the growth of construction and some service sectors remained subdued compared with pre-pandemic levels.

During an online briefing on the numbers, the ministry's Permanent Secretary Gabriel Lim signaled that full-year GDP growth would probably end up between 3% and 4%.

"We believe at this point in time that our growth forecast range of 3% to 5% adequately captures what we believe to be the likely landing point for the Singapore economy this year," he said. "There are significant downside risks, so we have been trying to model as best as we can the impact of so-called known-knowns, for example, the impact of the Russia-Ukraine war."

Before the conflict broke out in February, Singapore posted 6.1% growth for the October to December quarter, as it moved to revive its domestic economy and welcome vaccinated travelers from selected countries.

But trade officials said the war has disrupted the global supply of energy, food and other commodities, which has in turn worsened global inflationary pressure and adversely affected the growth of many economies. Earlier this week, Singapore announced that its core inflation rate hit 3.3% on the year in April, the highest in a decade.

Last month, the central bank of Singapore tightened monetary policy for the third time in as many meetings, as it works to keep a check on prices. On Wednesday, Edward Robinson, deputy managing director of the Monetary Authority of Singapore, said that the current monetary policy stance remains "appropriate," emphasizing that the next review will come in October.

"Monetary policy needs to be set appropriately for what is likely to be higher inflation and more persistent inflationary pressures," he said. "It has a role to play here, but it can't be the only instrument or the tool that we have."

Singapore's Trade and Industry Ministry also warned that if monetary policy tightening in advanced economies is faster than anticipated, market adjustments "could be disorderly and risks to financial stability could intensify."

The ministry noted that the onset of large capital outflows from regional economies with high dollar-denominated debt levels could lead to tighter financial conditions and derail growth in those economies.

Alex Holmes, Asia economist at Capital Economics, said in a report issued on Wednesday that the MAS is unlikely to tighten again in October. "Restrictions on both domestic activity and on international travel were eased markedly in late-March and then again in late-April," he said of Singapore's efforts to shake off the effects of COVID-19. "The upshot is that while growth should accelerate in the short term, once the boost from reopening begins to fade later in the year, the outlook for growth will start to look much less rosy."

Lockdowns to stem the spread of COVID-19 in China have also put supply chains at risk and driven fears of a further slowdown in the Chinese economy, which would weigh on Asian growth. The Trade Ministry said "global supply disruptions are projected to be more severe and prolonged than earlier expected, potentially persisting throughout 2022."

Analysts Chua Hak Bin and Lee Ju Ye from Malaysia's Maybank forecast growth as low as 2.8% for Singapore this year, in a report released earlier this month. They noted that non-oil export growth had "eased to the slowest pace in eight months," as shipments to China and Hong Kong contracted due to lockdowns and supply disruptions.

"The outlook for global trade is clouded by emerging headwinds including the Russia-Ukraine war, China's lockdowns, and global monetary tightening that may douse the recovery in the second half of the year," the analysts wrote. "Growing global headwinds will likely overwhelm and dampen Singapore's growth momentum by the second half."

In a recent exclusive interview with Nikkei, Singapore's Prime Minister Lee Hsien Loong highlighted inflation as a problem, as the Russia-Ukraine war has disrupted energy and food supplies.

"Inflation is quite high. You need quite drastic measures in order to bring it back down and to prevent inflationary expectations from taking root," he said in the interview. "It is very difficult to do that, and have a soft landing."

Earlier this month, the prime minister had warned Singaporeans that "there may be a recession within the next two years."

"We have to face up to these realities," he said at the time. "Singapore is tightly integrated into the global economy."