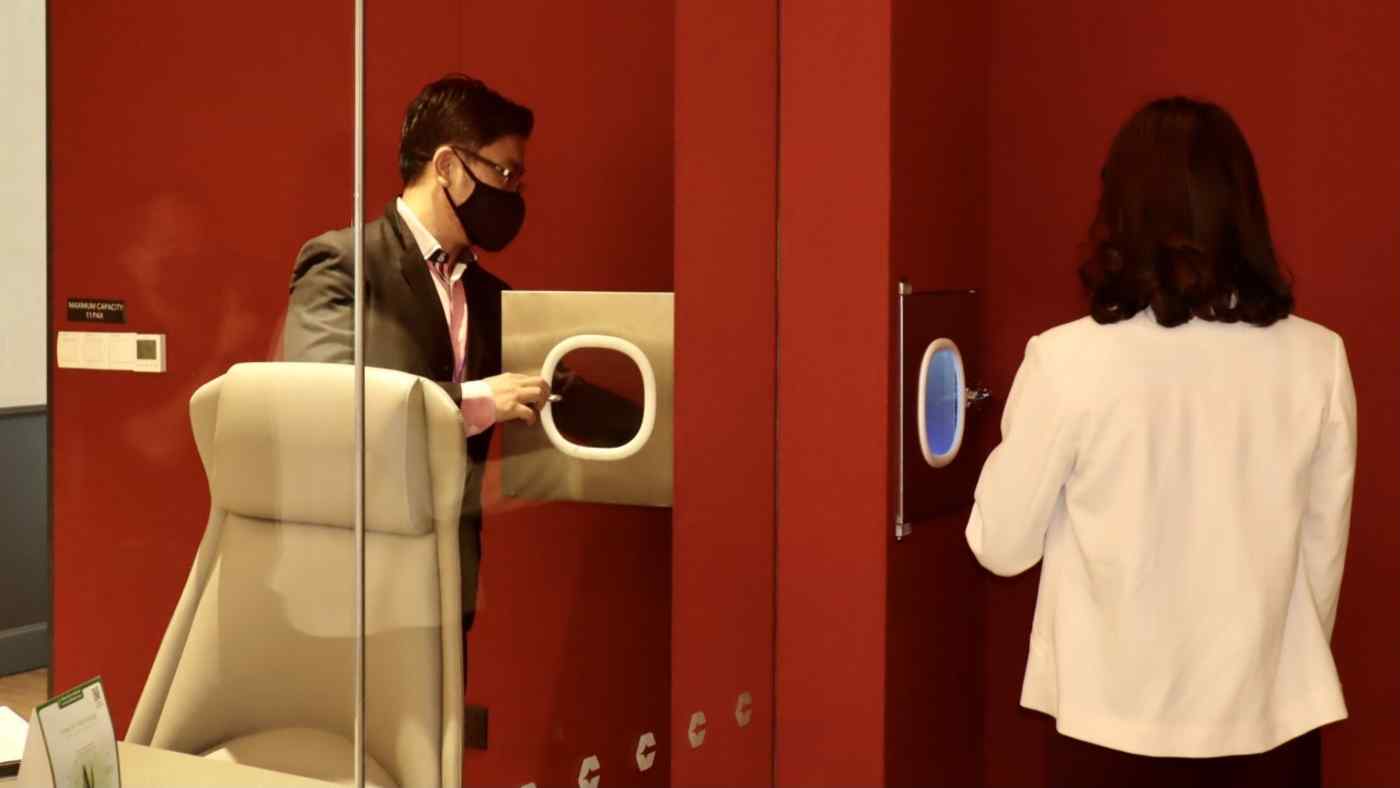 The "bubble" facility, called Connect@Changi and believed to be the first of its kind, is part of the city-state's strategy for reviving its pandemic-hit travel industry and maintaining its status as a regional business hub.

Visitors will be able to fly in and stay at the venue, where they can attend meetings with local contacts in rooms separated by airtight glass. Documents can be sanitized and passed through special windows.

Connect@Changi, developed by a consortium led by state investor Temasek Holdings, was created by remodeling part of the Singapore Expo convention and exhibition center near Changi. It has a gross floor area of 72,500 sq. meters and, according to the developer, is a candidate to play a role when the World Economic Forum comes to town in August.

Foreign visitors and locals have completely separate entrances and ventilation systems. The meeting rooms are divided in the middle with floor-to-ceiling panels, eliminating the risk of physical interactions. Speaker systems help meeting participants speak through the glass.

Guests will stay in two-story prefabricated hotel buildings set up inside the convention hall. The rooms are what you would expect in a normal hotel -- each has a bed, a shower, a TV and other amenities. A courtyard inside Connect@Changi. A two-story "hotel" is seen in the background. (Photo by Mayuko Tani)

As of Thursday's opening, the facility has 150 guest rooms and 40 meeting rooms available. These numbers will be increased to 660 and 170, respectively, by May.

Accommodation rates start from 384 Singapore dollars ($290) per night, including airport transfers and meals, while meeting room rates range from SG$20 to SG$200 per hour, depending on the size. The smallest room can fit four people, while the biggest can hold 22.

Inbound travelers using Connect@Changi will not be required to serve self-quarantine, on the condition that they accept various safety protocols including a PCR test on arrival.

Alan Thompson, senior managing director at Temasek International, on Thursday told reporters that all sorts of meetings could take place at the site -- multinational companies' group discussions, legal negotiations and wealth management advisory meetings. "There is actually no limit on the type of meetings that you could hold here," he said. Meeting room rates range from SG$20 to SG$200 per hour, depending on the size. (Photo by Mayuko Tani)

Singapore's economy shrank a record 5.4% last year, with visitor arrivals dropping by 86% to 2.7 million. The government expects a rebound to 4% to 6% growth for this year, but a key factor is how much international travels resumes.

In any case, those arrangements have not always gone smoothly. Some have had to be suspended due to worsening coronavirus outbreaks in the partner destinations. A travel bubble for general travelers with Hong Kong, which the two cities originally planned to launch late November, has not started yet.

Most recently, the WEF pushed back its meeting. The event -- normally held in Davos, Switzerland, in January -- was moved to Singapore and scheduled for May. But prolonged global travel restrictions prompted the decision to shift it to August.

When asked whether Connect@Changi will be used for the WEF gathering, Thompson noted that the Singaporean government is currently discussing logistics with the forum's organizers. He said the new facility "will certainly be one of the options that they have on the table to evaluate for their use."