Government cites needs of an aging population, but critics say move is premature

SINGAPORE The Singaporean government has announced it will raise the goods and services tax to 9% from the current 7% sometime between 2021 and 2025 to support expanded health care spending as the country's population ages.

Finance Minister Heng Swee Keat announced the planned hike on Feb. 19 during a speech on the budget for fiscal 2018, which starts in April.

The hike will likely come after the next general election, which will be held by January 2021.

"We have sufficient resources to meet our spending needs until 2020," Heng told parliament. "But in the next decade, between 2021 to 2030, if we do not take measures early, we will not have enough revenues to meet our growing needs."

In the 2018 budget, the government has allocated 10.23 billion Singapore dollars ($7.8 billion) for health care, nearly triple the expenditure for 2010. Economists had been predicting the government would announce a rise in the GST before long.

The United Nations estimates that the percentage of the population 65 and older in Singapore will rise to 23.2% in 2030, from the current 13%. 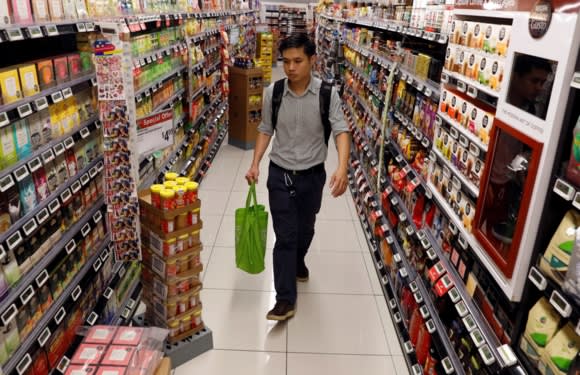 Plans to raise Singapore's GST amid rising prices have been met with grumbles.   © Reuters

"This GST increase is necessary because even after exploring various options to manage our future expenditures through prudent spending, saving and borrowing for infrastructure, there is still a gap," Heng explained. He said the country will build six hospitals and four polyclinics within the next five years.

The proposed GST hike will mark the first rise since 2007, when the rate was raised 2 percentage points from 5%. Singapore's GST rate is relatively low compared to the 10% rate in South Korea and Indonesia, and 8% in Japan. The revenue from a hike of 2 percentage points would be equivalent to 0.7% of the country's gross domestic product, the minister said.

Heng also said the government will impose the GST on imported services, such as music downloads and smartphone apps, from January 2020. Currently services purchased from overseas suppliers are not subject to the tax.

There are grumblings, however, about another GST hike, with some calling on the government to tax the rich instead by raising levies on cars. A 63-year-old retiree who complained about rising prices in recent years said he intends to vote for the opposition regardless of whether the GST goes up.

"I would expect revenues to have far exceeded expectations," he said, "which therefore means we will end the fiscal year in March with a large surplus."

With the digital economy expanding, taxing cross-border online shopping has been under consideration for sometime now. According to research by Google and Singapore's Temasek Holdings in 2016, Singapore's e-commerce market will expand to $5.4 billion by 2025, a more than fivefold increase from $1 billion in 2015.

The government will hold further international talks before making a decision on the taxation of imported goods, Heng said.

In addition to health care spending, the finance minister said infrastructure needs will also expand significantly over the next decade, with Singapore planning big projects like the Singapore-Kuala Lumpur high-speed railway and a fifth terminal at Changi Airport. He said the government plans to secure funds for such projects by saving and borrowing.

As a result the government is expected to see a primary deficit of S$7.34 billion.

The budget plan and proposed tax rise will be discussed in parliament before they are approved.