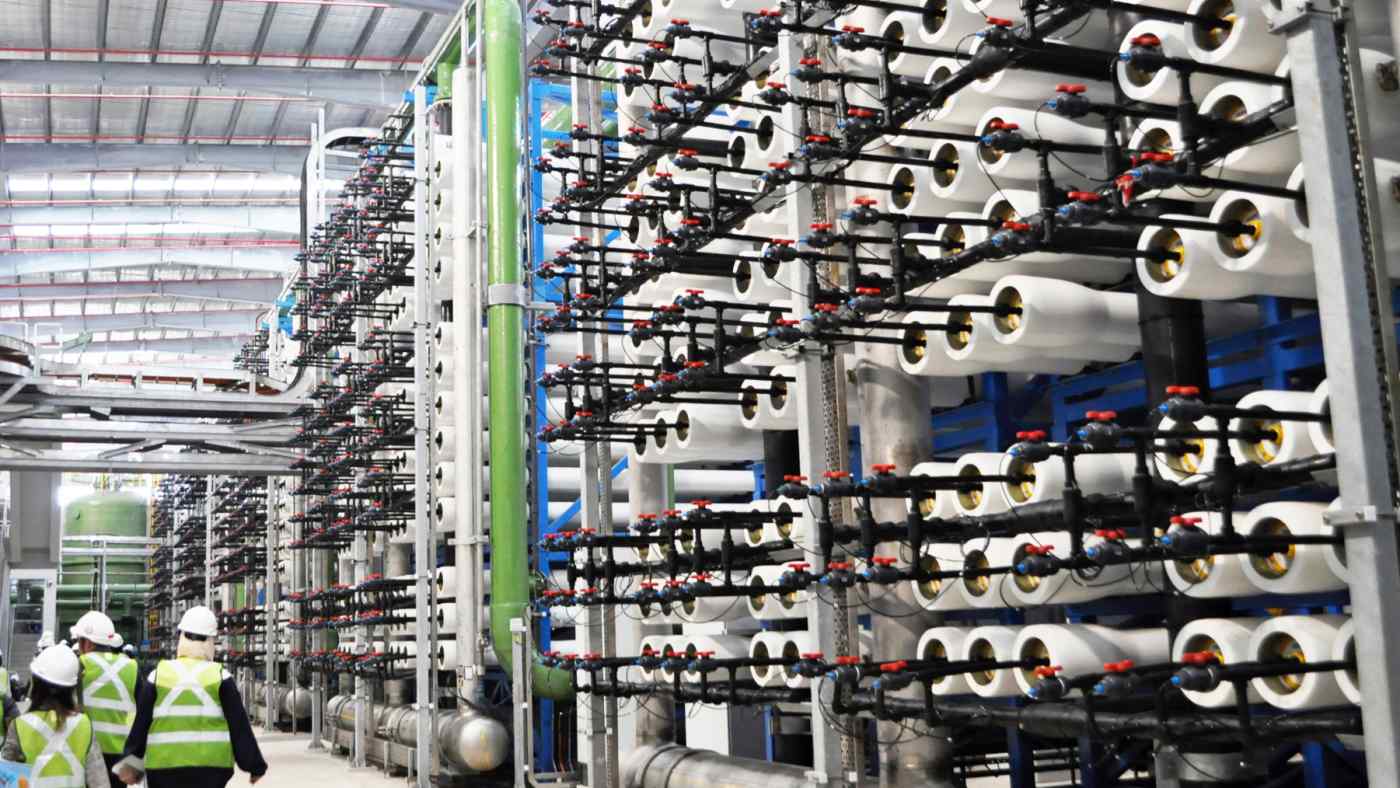 Desalination plants, such as this one in Singapore's western Tuas district, are part of the city-state's effort to raise its self-sufficiency in water.(Photo by Mayuko Tani)
TAKASHI NAKANO, Nikkei staff writerAugust 17, 2019 20:04 JST | Singapore
CopyCopied

SINGAPORE -- The government of Singapore is spending $10 billion Singapore dollars ($7.2 billion) to complete an underground sewer system in the city-state.

The pipeline, dubbed the "underground superhighway," is 3- 6 meters in diameter and buried 35- 55 meters underground. It will collect wastewater from households and factories and transport it to treatment plants, which will be used mainly for industrial and air-con cooling purposes.

"For us in Singapore, used water is a source of good water. We do not waste a drop of it," said Ng Joo Hee, chief executive of the Public Utilities Board.

The approximately 90km of deep tunnels and 120km of link sewers, which are scheduled for completion by 2025, are meant to increase the share of recycled wastewater to total water demand in Singapore from the current 40%.

The government hopes to meet up to 85% of demand with wastewater recycling and seawater desalination by 2060.

Water-scarce Singapore is investing heavily to raise its water self-sufficiency rate because it has periodically faced pressure over the issue from neighboring Malaysia, which has traditionally supplied it with much of its water. The 1962 Water Agreement between the two countries gives Singapore the right to 250 million gallons of water a day from the Johor River at a price of 0.03 ringgit (0.7 cent) per 1,000 gallons. Malaysian Prime Minister Mahathir Mohamad, who returned to power in May 2018, has demanded that the water tariff be raised, saying, "A rich country [cannot be] buying water from poor countries at such an unreasonable price."

The two sides have failed to reach an agreement on the price. If relations between the two sometimes-prickly neighbors worsen, Malaysia could cut Singapore's water supply.

Malaysia has another reason to give priority to the water needs of its own citizens. This spring, water levels in some reservoirs in the states of Kedah and Johor, which supplies water to Singapore, fell sharply. That forced Xavier Jayakumar, the country's water, land and natural resources minister, to ask rice farmers to reschedule their cultivation.

If climate change causes severe declines in rainfall, even water-abundant Malaysia may be forced to conserve.

According to U.N. estimates, Asia's population is expected to continue growing until 2055. As the region's rising industrial production and personal consumption push up demand, competition over water resources will increase. Water recycling and conservation will be needed to prevent frequent shortages.

Singaporean authorities are hitting the conservation message hard with messages such as, "Turn off shower when soaping", "Ensure tap is off when brushing teeth" and "Rinse vegetables in container."