Singapore recreates itself as wildlife paradise SINGAPORE -- Singapore is more often associated with being a fast-paced concrete jungle than a tropical wildlife paradise. But that is exactly how the government is trying to remake Singapore, with the latest addition of the luxurious Banyan Tree resort in the Mandai area, in a bid to attract more long-staying tourists to less-visited parts of the city.

Competitition for tourism dollars is heated in Southeast Asia. Singapore is one of the most popular tourist destinations in the region and has ranked among the top 10 global destinations since 2009, according to a Mastercard report. Tourists have grown steadily from 9.8 million in 2006 to 16.4 million last year. Its Changi airport, with a current handling capacity of 66 million passengers, is expected to see another 50 million passengers when its terminal five opens in the mid-2020s. 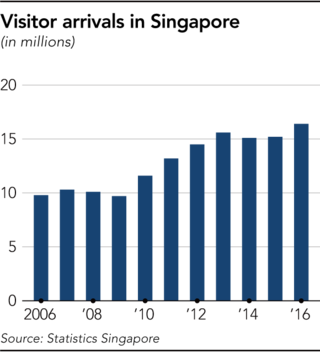 Like many other Asian destinations, Singapore's tourism boom is backed by a growing number of Chinese visitors. Last year, they were the largest spenders and contributed the most to tourism receipts -- around $2.8 billion Singapore dollars ($2 billion) from January to September alone. There were about 1.9 million Chinese arrivals from January to July this year, a 7% increase on 2016, a year that already marked record highs in tourist numbers and receipts.

But Chinese visitors are also keen on neighbouring countries such as Thailand and Malaysia, which perhaps have more to offer by virtue of the fact that they are many times the size of Singapore. To compete with the other popular destinations in the region, "the quantity of visitors cannot be the only focus," said Wong King Yin, a lecturer at Nanyang Business School in Singapore.

"The quality of visitors -- how long they stay and how much they spend in Singapore -- has become an even more important key performance indicator for Singapore's tourism industry," said Wong. This is an important sector for Singapore -- the travel and tourism industry contributed 9.9% to gross domestic product in 2016, according to the World Travel and Tourism Council, a global body made up of airlines, hotels, car rental companies and others.

Despite the continual rise in the number of tourists over the years, the average length of stay for visitors has remained constant at around 3.5 days. Jochen Wirtz, vice dean of graduate studies at National University of Singapore Business School, said that Singapore was "a gateway for holiday makers to [other parts of] Asia or a stopover on the 'Kangaroo route' from Europe to Australia."

Other Southeast Asian countries are ramping up efforts to improve their tourist attractions. Malaysia is building more theme parks to boost visitor numbers. It opened an animation theme park in Ipoh this year featuring popular cartoon characters such as the Smurfs, hoping to draw families. Another theme park, 20th Century Fox, is under construction in Malaysia's Genting Highlands.

Seshan Ramaswami, associate professor of marketing education at Singapore Management University, said the country needed to reinvent itself "to become an enticing destination for first time visitors, and a repeat experience." He added that the city has to go beyond offering the usual shopping and dining opportunities as online retailing is "expanding dramatically worldwide" and modern offline retailing is also "improving substantially in some of the main tourism markets like Indonesia, India and China."

To this end, Singapore is pumping resources to revitalize its wildlife parks. The government is creating an eco-tourism hub in Mandai, in the northern part of Singapore, that it hopes will attract more than 10 million visitors annually.

Mandai is already home to the Singapore Zoo, the Night Safari and the River Safari which was opened in February 2014. The Bird Park, an aviary in the southwestern side of the country, will be relocated to Mandai on a bigger site by 2020. A rainforest-themed park will also be opened there by 2021. Within the hub, there will also be a research and breeding facility for endangered species.

Luxury resort operator Banyan Tree Holdings was recently picked to work with developer Mandai Park Holdings to open its first resort with around 400 rooms in Singapore by 2023 in Mandai. Apart from the standard and family rooms, visitors will also be able to stay in treehouses and elevated cabins that will provide an "immersive" experience. Visitors can also go on wildlife-spotting and nature walks.

Ramaswami said that the Mandai development, with the inclusion of Banyan Tree as an eco-friendly resort can become alternative "anchor" for the entire Singapore brand." He added that it will appeal to travellers who want "to experience nature in a sophisticated urban environment."