TOKYO -- Singapore made significant progress in this year's gender equality ranking, surging 13 spots due to improvements in economic participation and opportunity, as well as educational attainment.

The Global Gender Gap Index is announced annually by the World Economic Forum, a Swiss nonprofit foundation, and ranks over 150 countries.

The index is composed of 14 indicators in four main categories: economic participation and opportunity; educational attainment; health and survival; and political empowerment. The report aims to allow comparison across and within neighboring countries on the relative gaps between women and men.

The latest report, released on Dec. 17, highlighted Singapore's overall improvement. Ranked 54th on the list, the country has large numbers of women in traditionally the most segregated industries, such as engineering and cloud computing.

Singapore also shows gender parity in marketing, leading to a ranking of 20th in the economic participation and opportunity subindex -- up 25 spots compared with 2006. Educational attainment improved as well, with the gender gap fully closed as regards enrollment in secondary and tertiary education. 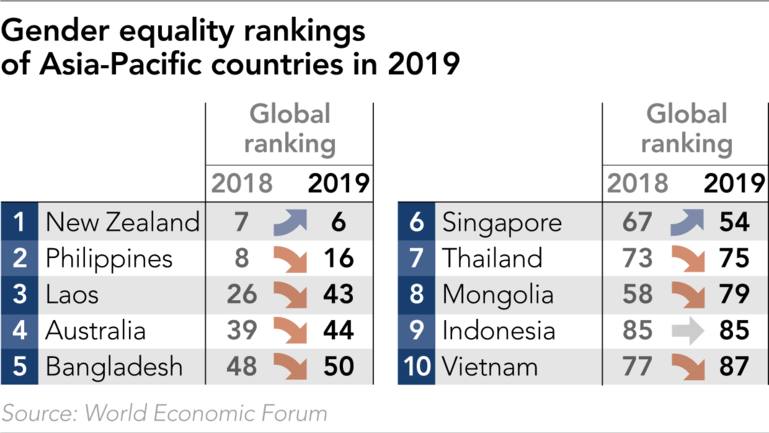 Meanwhile, the Philippines dropped eight spots to 16th in the ranking due to a widening political empowerment gap. Female representation in the cabinet is lower than two years ago, declining to 10% in 2019 from 25%, while representation in parliament also fell.

Despite its latest decline, the Philippines remains the highest-placed Asian country. The country has closed 78% of its overall gender gap, with women outnumbering men in senior and leadership roles while having a high level of gender wage equality. At 71%, more Filipino women are enrolled in secondary education than men.

Japan slipped 11 spots to 121st, behind both South Korea and China. Japan was ranked 144th in the political empowerment category, the lowest of any developed nation. Women also comprise only 10% of parliament, one of the lowest in the world. There is only one women in the 18-member cabinet, and the country has had no female leader in its modern history. Japan's gender gap is by far the biggest among all advanced economies, with only 15% of senior and leadership positions held by women, while income is about half that of men. Meanwhile, Japanese women spend more than four times the amount of time men do on unpaid domestic work.

European countries dominated the ranking, with Iceland holding the top spot and others such as Norway, Finland, Sweden and Ireland placing within the top 10. At the current pace, it will take Western Europe 54 years to close the gender gaps. South Asia will take over 71 years and Central Asia more than 100. East Asia and the Pacific will take the longest, at 163 years.