Singapore seen hiking GST for first time in over a decade SINGAPORE -- Singapore is expected to raise goods and services tax for the first time in more than a decade sometime in the fiscal year starting in April, say economists.

Francis Tan, an economist at United Overseas Bank, sees the government hiking GST to 8%, from the current 7%. He expects another hike to 9% next year.

Citigroup's Kit Wei Zheng also sees the likelihood of a 1 or 2 percentage point increase in GST. "We can't preclude the probability (the government) may use the recent growth rebound to pursue counter-cyclical fiscal policy via GST hike."

The government is expected to make the announcement Monday as part of its 2018 budget for the year starting April 1. Singapore is well-known for its low-tax regime that helped its transformation from a small port to a major financial center. But faced with an ageing population and structural growth issues, the government has to consider various options to raise revenue.

One of the areas in which the government wants the money to go into is to help pay for rising healthcare costs as a result of the ageing population. This is a delicate matter for the ruling party, which has to weigh elderly care against a potential voter backlash, with general elections due to be held by January 2021. Singapore says it needs a revenue boost to meet the demands of a rapidly ageing population. (Photo by Kentaro Iwamoto)

"Being in the middle of the electoral term, the GST hike is more likely to be implemented early rather than near the end of the term," said UOB's Tan.

How and when to raise taxes has been a heated topic for the past year in Singapore, but ministers had hinted at an increase. "Looking ahead, healthcare expenditure will obviously increase," Senior Minister of State for Finance Indranee Rajah said late January, according to a report by local newspaper Straits Times. "We do have to look at the question of raising taxes."

In November, Prime Minister Lee Hsien Loong noted the need for a tax hike during an annual convention held by his People's Action Party. "For this current term of government, we have enough revenue," Lee said. "But our spending needs will grow."

The United Nations estimates that the population of those 65 and older will rise to 23.2% in 2030, from the current 13%. Government health care spending for the current fiscal year to end-March is expected to rise to 10.7 billion Singapore dollars ($8.1 billion), almost triple the S$3.7 billion it actually spent in fiscal 2010. 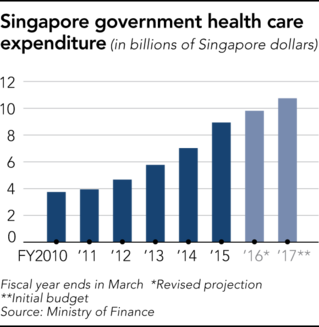 The big increase in spending has created an estimated primary deficit of S$5.62 billion for the current fiscal year, a figure that has ballooned to about twice that of fiscal 2016 when it was just S$2.72 billion, the government said.

The ministers did not specify which tax will be raised, but GST seems the likely option, according to many economists.

Almost all the economists surveyed expect an adjustment to GST, but only six expect it to be imposed as soon as this year, and five are betting on 2019 or later, according to Bloomberg's report.

More than ever, whether to hike GST has become a political calculation. Pleasing the elderly is becoming more important to the People's Action Party that has ruled Singapore since it gained independence in 1965, but recent elections show a citizenry dissatisfied. In the 2011 general election, the PAP lost a group representation constituency, in which teams of candidates compete for the first time. There are now gumblings about another GST hike, with some calling on the government to tax the rich instead by raising levies on cars. A 63-year-old retiree complained that prices have kept on rising in recent years but whether GST is hiked won't change the way he votes -- for the opposition.

"I would expect revenues to have far exceeded expectations," he said, "which therefore means we will end the fiscal year in March with a large surplus."

The budget that the government is announcing will be discussed in parliament before enactment.

Singapore isn't the only Asian country hiking taxes. Japan plans to increase consumption tax to 10% in October 2019, from the current 8%. India last year introduced GST of 5% to 28%. Malaysia in 2015 introduced a 6% GST.

Nikkei staff writer Mayuko Tani in Singapore and Masayuki Yuda in Tokyo contributed to this story.