'Both China and US are important,' says chief of industry development SINGAPORE -- Singapore will remain "objective" regarding use of equipment from Huawei Technologies and be open to companies from any country, a government official told the Nikkei Asian Review on Wednesday.

Beh Swan Gin, chairman of the Economic Development Board, reiterated Singapore's neutrality in the U.S.-China trade war, which has weighed on the trade-reliant city-state.

"I think the concerns that America has are legitimate, but let's see how we can address those concerns in a constructive way," Beh said. "If indeed there are possibly security lapses -- possibly so-called back doors -- that could be exploited, then let's make sure those back doors are closed and addressed."

"For Singapore, we want to make sure we continue to conduct our business in an objective manner," he stressed.

Singapore has welcomed investments from around the world. Last month, Huawei launched an innovation lab for artificial intelligence and cloud services in Singapore, reflecting the country's efforts to become an innovation hub. The Chinese maker also sells mobile phones in Singapore.

Regarding security concerns raised against Huawei by the U.S., Singapore is closely monitoring the findings of other countries, Beh said. "Both China and the U.S. are important and we will take whatever actions that are based on specific concerns." 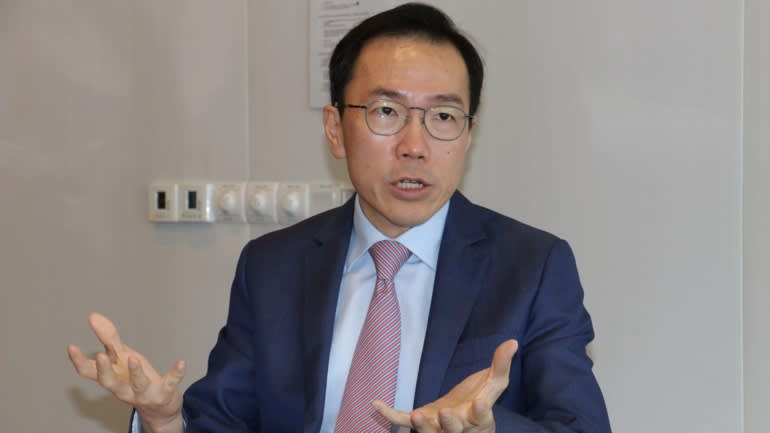 Beh Swan Gin, Chairman of the Economic Development Board. (Photo by Kentaro Iwamoto)

Beh noted that America's ban on component sales to Huawei will be "very disruptive" to Asia's supply chains as "all the companies who are part of electronics supply chains will have to think hard about how they are going to cope with that."

But he also said that this would open up new opportunities for other makers like Nokia, which in turn could provide additional business for Asian companies.

While the U.S. and China remain at odds, Singapore can continue to work with both as an open economy, Beh said. "We definitely want to make sure that we remain open. We remain a [place] where, whether you are American companies or Chinese companies, you can be located."

Still, the standoff between the world's two biggest economies has put pressure on the city-state. Gross domestic product for the January-March period marked its lowest growth rate in 10 years at 1.2%, with growth in the manufacturing sector contracting 0.5% from a year ago.

As for foreign direct investment, however, Beh said that Singapore will have "a reasonably good pipeline of investments" this year because there is a time lag between companies' decision to invest and actual investment.