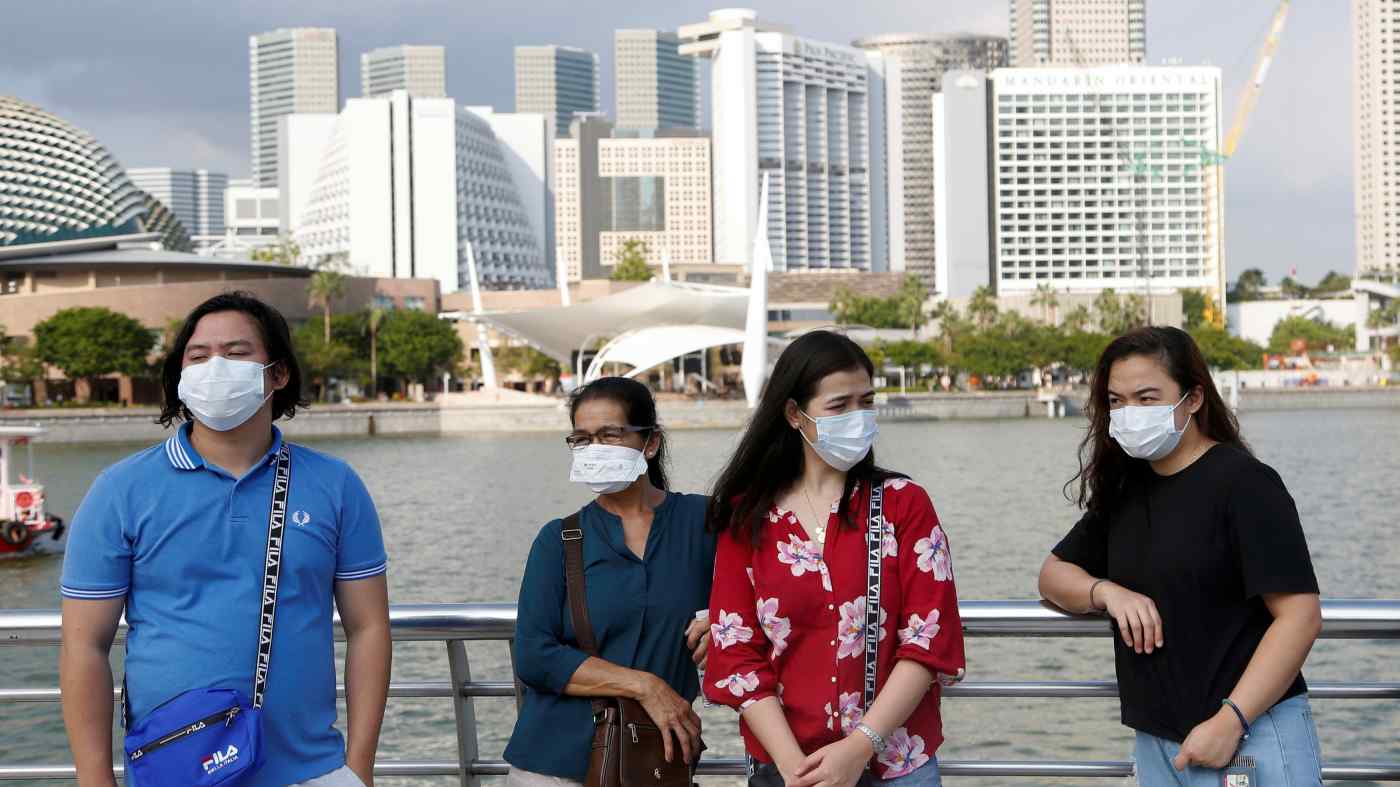 SINGAPORE/BANGKOK -- Singapore's economy shrank 2.2% on the year in the first quarter, preliminary data released on Thursday shows, marking what may be the first in a series of quarterly contractions as Southeast Asia reels from the coronavirus pandemic sweeping the globe.

Later the same day, the Singaporean government unveiled a second economic stimulus package worth around $33 billion, far bigger than its initial $4 billion worth of measures.

The city-state's trade and industry officials downgraded their full-year gross domestic product forecast to -4% to -1% -- well below their previous projection of -0.5% to 1.5% -- after figures showed contractions in all key sectors. Officials said the wider forecast range accounts for the heightened uncertainty in the global economy, due to the outbreak.

Either way, Singapore is on course for a recession in 2020, almost two decades since its last one.

Singapore's announcements came a day after Thailand's central bank predicted the kingdom's economy would contract by 5.3% this year -- its worst result since the Asian financial crisis of 1997-1998. With the two forecasts, the impact of the pandemic on the Southeast Asian bloc is beginning to crystallize, while the region's governments scramble to introduce relief plans.

In Singapore's case, the stakes are high for Prime Minister Lee Hsien Loong, who is expected to lead his People's Action Party into one last election before stepping down. His government has won praise for its handling of the coronavirus, but the crisis is making an already challenging economic situation worse.

The trade-dependent economy grew only 0.7% last year, down from 3.4% in 2018. Disruptions in the global flow of goods due to the U.S.-China trade war contributed to the city-state's lowest growth rate since the global financial crisis days of 2009.

In the first quarter of 2020, the construction industry led the losses, with a 4.3% contraction on the year. The services sector followed, shrinking 3.1% -- including tourism-related businesses gutted by COVID-19. Manufacturing declined 0.5%.

"The air transport, accommodation, food services and retail trade sectors shrank on the back of a sharp decline in tourist arrivals as well as a fall in domestic consumption as a result of the COVID-19 outbreak," the Trade and Industry Ministry said.

Singapore's tourism agency had said that it expects a 25% to 30% drop in visitor arrivals this year, from last year's 19.1 million. Tourism contributes about 4% of GDP.

"The COVID-19 impact on the Singapore economy will be fairly devastating in terms of both manufacturing ... as well as the growing demand shock afflicting services growth, particularly for the transport, commerce and accommodation industries," Selena Ling, head of research at OCBC Bank, said in a report.

When it comes to tourism, Thailand faces even more pain. The sector makes up 20% of GDP, and arrivals have dropped by 90%. At the same time, the Thai central bank is expecting exports of goods and services will fall by 16.4% from the previous year, with imports to slip 11.6%. Private investment and consumption are projected to decrease by 4.3% and 1.5%, respectively.

Thailand went into a state of emergency on Thursday, with restrictions to last through April in an attempt to contain the virus. "Those measures will have some impact in limiting your basic rights and the everyday life of Thai people," Prime Minister Prayuth Chan-ocha said on Wednesday. "On the other hand, there are also some measures that will help cushion the adverse economic impact as well."

The Bank of Thailand noted that government spending this year will increase by 5.8%, but this will be far from enough to offset the overall GDP contraction.

Back in Singapore, the government more than doubled down with its new relief package.

In February, the city-state earmarked 5.6 billion Singapore dollars ($4 billion) to help businesses and residents. This included corporate income tax relief for companies, with additional support given to the tourism, aviation, retail, food services and point-to-point transport sectors in the form of property tax rebates.

The second wave announced on Thursday is valued at over SG$48 billion ($33.36 billion). To save jobs, the government will pay 25% of monthly wages for every local worker in employment, capped at SG$4,600, for nine months until the end of 2020.

Self-employed workers will get SG$1,000 a month over the same period. To help fund the outlays, SG$17 billion is to be drawn from financial reserves -- only the second time in history that the government has dipped into its war chest. The last time was in 2009, in the aftermath of the financial shock.

Before the latest relief details were announced, however, DBS Bank Economist Irvin Seah said he expects two to three quarters of contractions this year, with conditions only improving as Singapore heads into 2021. He warned the economy "will be one of the worst-hit in the region from this COVID-19 because of its heavy dependency on the tourism industry, particularly from China."