Singapore walks a tightrope between China, US Leaders attending the Belt and Road Forum wave as they pose for a group photo at the Yanqi Lake venue on the outskirt of Beijing on May 15.   © Reuters
YASU OTA, Nikkei Asian Review columnistAugust 31, 2017 10:00 JST | China
CopyCopied

SINGAPORE To be a global hub, a country must be as diplomatically neutral as possible. That is easier said than done, however, especially when the country in question is a small one caught between the two superpowers of the East and West.

Singapore is in the unenviable position of trying to anticipate the next moves of two unpredictable leaders -- U.S. President Donald Trump and his Chinese counterpart Xi Jinping -- while also striking a delicate balance in its position within the international community.

Singapore's tough position was plainly evident at the Belt and Road Forum, held in Beijing in mid-May to drum up support for China's Belt and Road Initiative for infrastructure building. The meeting drew some 1,500 representatives from some 130 countries, among them the leaders of Malaysia, the Philippines, Indonesia and Myanmar.

Missing from the group photo was Singaporean Prime Minister Lee Hsien Loong, who was not invited to the forum. According to media reports, Singapore asked China for an invitation, but Xi flatly rejected the request.

Among the members of the Association of Southeast Asian Nations, Singapore has been one of the most vocal in criticizing China's aggressive actions in the South China Sea. If the area were to fall under Chinese military control, it would strike at the heart of Singapore's very existence. The city-state owes its prosperity to its status as a trade and investment hub, and has been a staunch supporter of the Trans-Pacific Partnership trade pact, championed by the U.S. administration of President Barack Obama but abandoned under Trump. For Singapore, maintaining free trade in the region based on shared, transparent trade rules is a matter of life and death.

China, for its part, sees Singapore as a nuisance, a country that has the temerity to oppose Beijing despite its own small size and largely ethnic Chinese population. Singapore, meanwhile, has long counted on the U.S. for support, but that confidence has been badly shaken since Trump, an advocate of protectionist trade policies, took office. 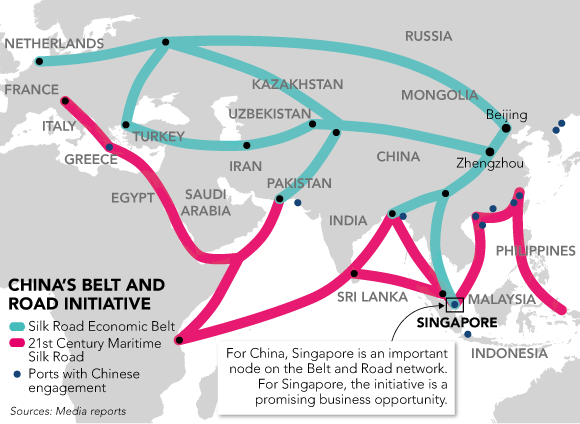 "Is the Belt and Road another hub-spokes strategy?" he asked. In other words, is China actually aiming to build a global economic and security order to serve its own ends? He answered his own question: "Chinese leaders have made it clear that is not their intention."

The Belt and Road Initiative is a grand plan to connect China to Europe through land and sea routes, with a focus on infrastructure development in areas along those routes. It is supported financially by the Silk Road Fund, which China set up and injected with $40 billion, and by the China-led Asian Infrastructure Investment Bank.

The initiative also serves as a trade and industry policy with the aim of stimulating external demand to sop up China's excess production of cement, steel and other materials. It is natural that China's military presence will grow if it can build and maintain influence over ports in key areas.

In other words, the Belt and Road Initiative is China's bold attempt to create an economic and security order throughout Asia.

But in his speech, Goh Chok Tong purposely turned a blind eye to this. He was probably not trying to please China per se but merely hoping to head off a confrontation with Beijing.

Observers say Singapore also wants to avoid being left out of the business opportunities the Belt and Road Initiative will likely provide, particularly for companies in the infrastructure, finance and telecommunication fields. China is already an indispensable economic partner for Singapore, accepting far more of the city-state's exports and foreign direct investment than any other market. A senior EU diplomat based in Tokyo who was in the audience for the speech said, "Singapore is struggling to maintain its balance as it is pulled back and forth."

Economic considerations were apparently also the reason Singapore refrained from criticizing China over the South China Sea issue during the ASEAN foreign ministerial meeting held in Manila in early August.

After the meeting, Chinese Foreign Minister Wang Yi said, "We commend Singapore for playing a positive and constructive role in advancing China-ASEAN relations."

The remark was taken as praise for Singapore for remaining silent over the delicate issue.

Singapore's struggle to keep its distance, however, took on another dimension just two months later.

In a sudden announcement on Aug. 4, the Ministry of Home Affairs said it had stripped 60-year-old academic Huang Jing and his wife of permanent resident status and barred them from re-entering Singapore permanently on the grounds that he was an agent of a foreign country.

Huang, a professor with the Lee Kuan Yew School of Public Policy at the National University of Singapore and a renowned scholar of international politics, was born in China but holds U.S. citizenship.

According to the Home Affairs Ministry, "Huang used his senior position in the LKYSPP to deliberately and covertly advance the agenda of a foreign country at Singapore's expense." The ministry did not disclose which country it suspects Huang of serving, but he is known for siding with China in its disputes over the South China Sea. Huang also served as a senior overseas economic analyst for China's state-run Xinhua News Agency.

It is not clear what if any specific action of Huang's the government objected to, and the professor maintains his innocence.

STANDING UP While the deportation decision came as a surprise, a furor stirred up by influential former diplomat Kishore Mahbubani, now dean of the Lee Kuan Yew School of Public Policy, may help explain the sudden move. Mahbubani, believed to be a close confidant and supporter of Huang, wrote an article for The Strait Times newspaper in July saying, "Small states must always behave like small states." Singapore, he explained, should learn a lesson from the recent incident of Arab countries cutting off diplomatic relationships with Qatar.

The article sparked an immediate backlash within Singapore's diplomatic community. Bilahari Kausikan, an ambassador-at-large, was particularly harsh in his criticism, calling Mahbubani "muddled, mendacious and indeed dangerous" in a Facebook posting. Lee Kuan Yew, Singapore's founding father, "stood up to China when he had to," Kausikan said, arguing that small countries should not follow big ones blindly. Mahbubani's article did not directly mention the South China Sea disputes, but it was widely interpreted as implying that Singapore should remain quiet about the issue.

When Huang's deportation was announced, debate over the article had yet to die down. Whatever the facts behind the incident, it seems certain that many key figures in the Lee administration believe Singapore should not be intimidated by China. By ousting Huang, Singapore aimed to convey that very message to Beijing and restore what it feels to be a safe diplomatic distance, observers said.

"There is no doubt that the move was aimed at keeping China in check, as it is becoming increasingly aggressive toward Singapore," an Asian diplomat stationed in Singapore said.

Singapore has a role to play in charting the region's path forward. This responsibility will only grow when Singapore assumes the chairmanship of ASEAN in 2018. The city-state will continue to be a valuable member of the international community as long as it sticks to its principles of free trade and diplomatic neutrality. With China and the U.S. acting increasingly in their own interests, it is up to countries like Singapore to remain clear-headed and speak truth to superpower.