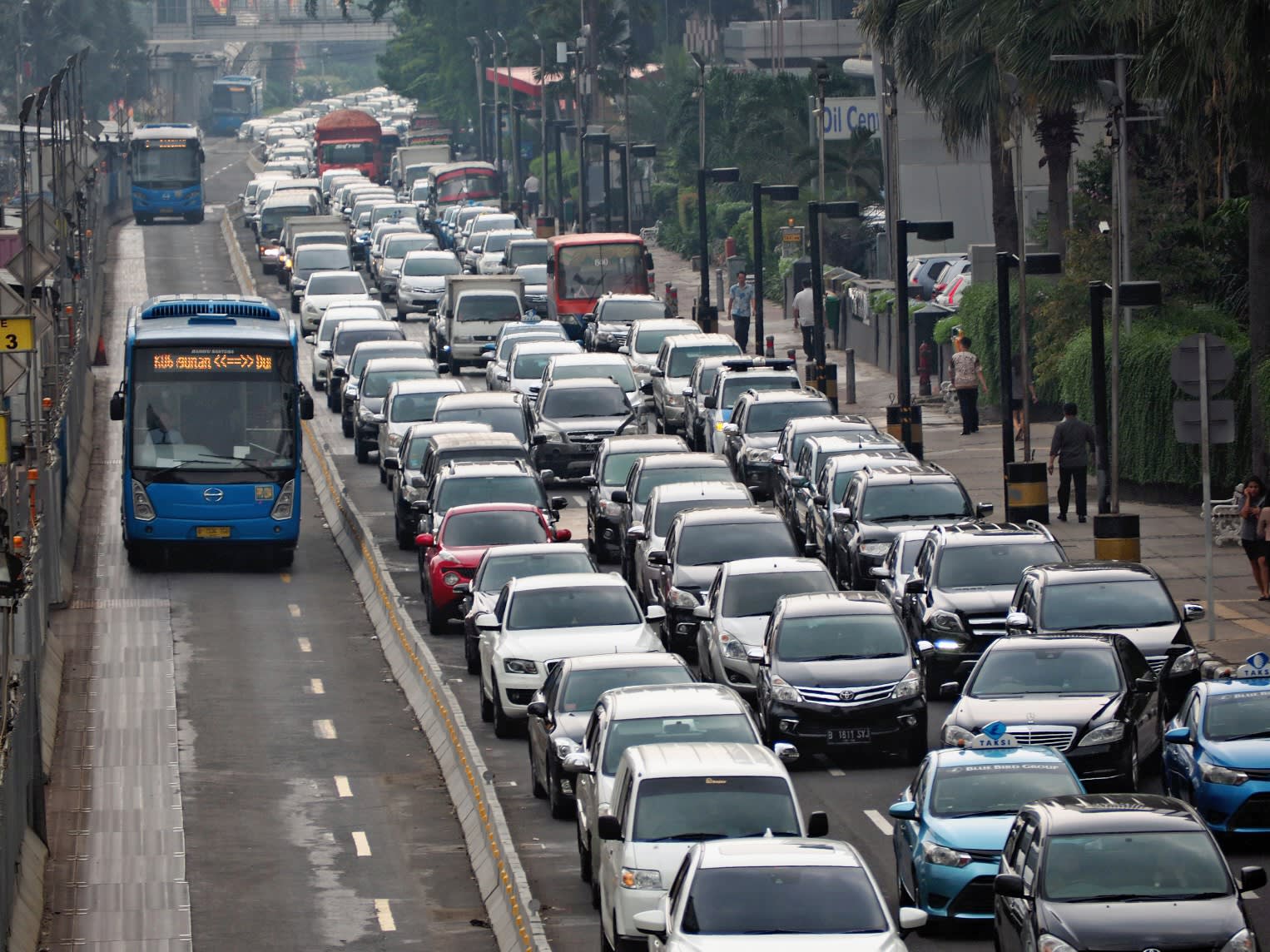 Jakarta is notorious for its chronic traffic congestion, which is considered to be among the worst in the world.
JUN SUZUKI, Nikkei staff writerJuly 20, 2016 19:00 JST | ASEAN
CopyCopied

JAKARTA -- The government of Jakarta will introduce an odd-even vehicle restriction scheme to ease the chronic traffic congestion the capital is notorious for having.

Starting on July 27, car access to some main streets in central parts of the bustling city will be restricted during certain morning and evening hours on weekdays under a license number-based program.

Cars with license plates ending with an even number will only be allowed on the designated streets on even-numbered dates. Alternately, vehicles with odd license numbers will be able to access these streets only on odd-numbered days.

The road space rationing program is the capital's response to what is said to be the worst traffic congestion in the world, which causes estimated annual losses totaling 65 trillion rupiah ($4.97 billion).

But some warn that the scheme could cause serious damage to the nation's economy by restraining the flow of people and goods in the country's business hub.

The outcome of the plan could be instructive for other mammoth cities in Asia that are facing the same problem.

The odd-even restriction will be imposed on five major streets in central Jakarta lined by office buildings, including Thamrin and Sudirman, during the morning and evening rush hours -- 7-10 a.m. and 4:30-8:00 p.m. -- on weekdays.

After a one-month trial period, the program will be fully introduced on Aug. 30.

Public transportation vehicles, such as taxis and buses, as well as emergency vehicles and official cars of the president and ministers will be exempted from the restriction.

Castrol also said some 27% of the travel time of an average driver in Jakarta was spent idling.

In fact, during peak traffic hours, it can take a car nearly an hour to travel 2-3km on a major road in the city.

But limiting vehicle access to main streets could cause serious trouble for commuters and businesses in the city, which lacks a well-developed public transportation network. 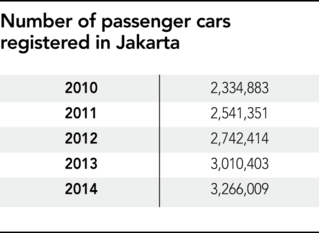 Buses are the principal component of the city's public transportation system. But even TransJakarta bus service, which uses special "busway" lanes, carry only 250,000 to 350,000 people daily. The new mass rapid transit system, a subway system that is under construction, is expected to have the capacity to carry about 400,000 passengers per day.

These numbers indicate the enormity of the challenge of meeting the transportation demand in the city, where millions of people travel every day.

A central government agency responsible for managing traffic in the metropolitan area has a target of raising the ratio of people using public transportation in the city to 60% by 2029.

With the number of privately owned cars and motorbikes rising steadily, though, some point out that road traffic conditions are rather getting worse every year. As of the end of 2014, there were 3.26 million passenger cars registered in Jakarta, up about 40% from four years earlier.

The Jakarta administration has taken a series of measures to ease traffic jams in the capital, but none of them have proved very effective.

Until May this year, for instance, the so-called "three-in-one" rule was in place, which required vehicles entering central parts of the city during the morning and evening rush hours to carry at least three people including the driver.

But the system was ineffective because many people opted to spend several tens of thousands of rupiah to use passengers for hire, known as jockeys, to sidestep the rule, according to the local government.

A senior official of a consumer group warns that the odd-even plan will only lead to the proliferation of illegal services for changing number plates and bribes to police officers.

The alternate-day scheme is also unpopular among businesses, which fear that it will hamper their operations.

The Jakarta government stresses that the odd-even road access restriction is only a temporary measure. The local government is now considering a system to charge vehicles around 50,000 rupiah for entering central parts of the city, an idea modeled on the fees imposed by London and Singapore. However, the system cannot be introduced immediately because it requires revising related laws.

Systems and programs to restrict car access in congested areas can only be stopgap measures for easing traffic problems. A fundamental solution clearly requires the development of a public transportation system and more radical plans like relocating the capital or building an urban subcenter.